I’m not sure there’s a horror film today that’s trying harder to be controversial than THE HUNT. We have a limited amount of information on THE HUNT at this point: we know that the director intended it as a “both sides” political satire, we know that the antagonists are “liberal elites” who kidnap people (some of which happen to be conservative) and hunt them for sport, and we know the film’s release got delayed after two mass shootings in El Paso, Texas and Dayton, Ohio. Beyond that, all we can really go off of are the trailers. And boy howdy folks, if they’re any indication, THE HUNT is going to be a real doozy.

Bear with me, as I address the elephant in the room (see what I did there?). A film that casts conservative conspiracy theorists as the good guys fighting inhuman liberal elites already seems to have its message a bit backwards. The premise of the film is that one of the characters’ Alex-Jonesian conspiracy theory was spot on, and the way our heroes fight back against the liberal invasion is with the weapons these conservative survival nuts have so kindly stockpiled. To put it mildly this is a bad look, as it seems to be validating and channeling a great deal of the Trumpian worldview: liberals are inhuman monsters who see us as dispensable (deplorables, if you will, which actually comes up in the trailer) and we have to band together to defend ourselves and, naturally, the American way. Hoo-ra.

The director has said that this film is meant to attack both sides, to lampoon the ways in which each side creates caricatures of the other and hopefully shed a light on how political dialogue has degenerated. It would be easier to believe that if we had seen any hint of the conservative characters also acting cartoonishly, or spouting propagandic one-liners or engaging in serious acts of violence that were unconscionable (most of what we’ve seen so far appears to be self-defense). But with what we’re seeing here, I find that hard to believe: only the left wing characters are portrayed in such a way, with Hilary Swank’s character pulling a Kellyanne Conway inspired denial of boldfaced fact (seems like projection to me, but okay), another character monologuing about how his identifying as white is probably problematic, and a truly inspired cut from a character saying “they’re not real people” to our Kellyanne Conway figure assaulting another character with a Joker-esque rictus. 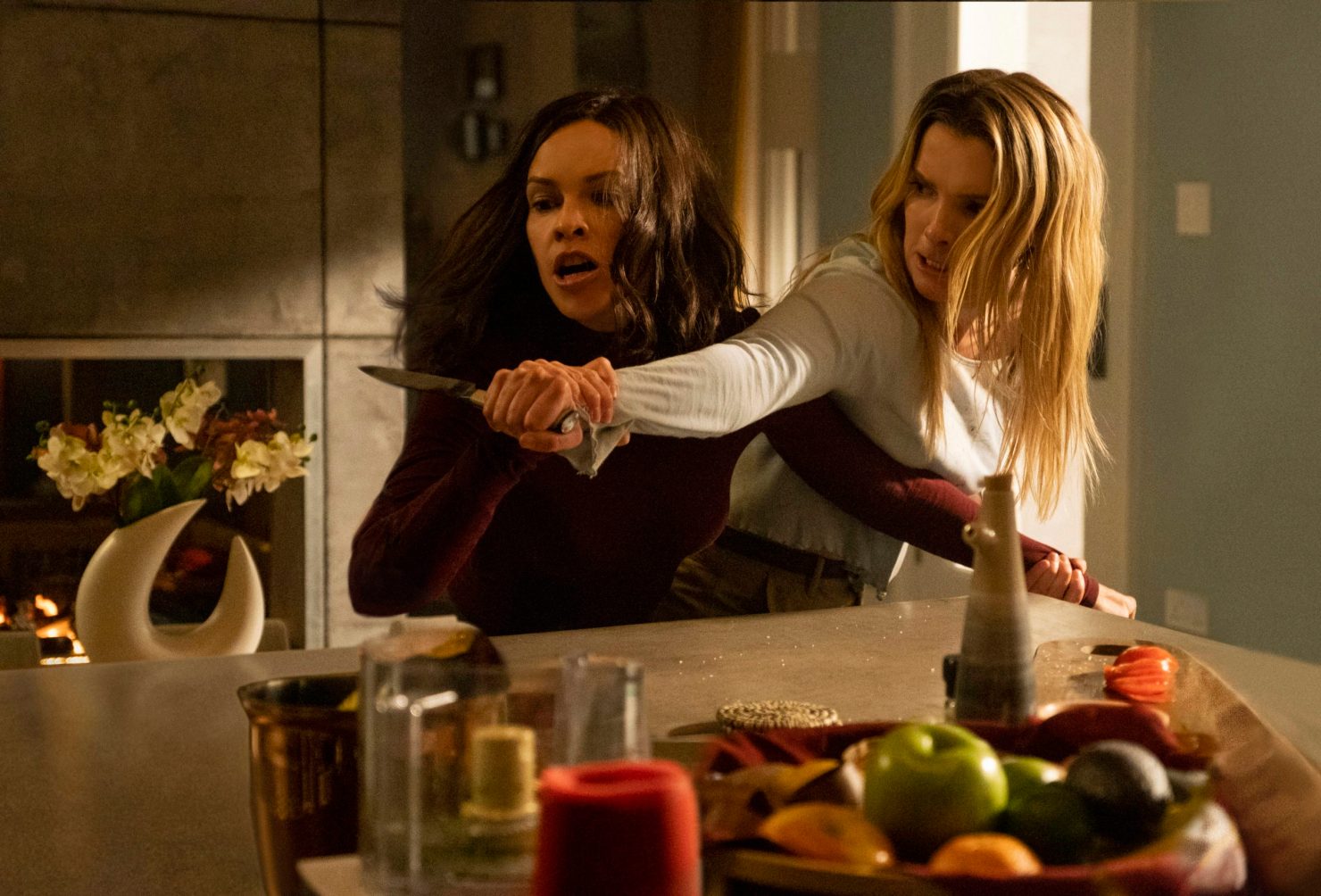 So far, it’s difficult to read the film as anything else but a conservative reaction to movies like Get Out and The Shape of Water, which have a distinctly liberal slant (or what conservatives would brand as a liberal slant). Conservative pundits like Ben Shapiro and Paul Joseph Watson frequently attack films that attempt to reflect diverse experiences, preferring their films white, straight, and “Christian.” They believe (incorrectly) that the inclusion of characters and storylines outside of that bubble constitutes propaganda and have raged in video after video about the so-called “decline of culture” due to what they frame as “liberal” media messaging. THE HUNT feels like the kind of film that Paul Joseph Watson would cook up, a spiteful, petulant attempt to represent “the other side;” it seems to be channeling these attitudes deliberately as if to say “you inhuman liberals may see things this way, but this is how I see the world. And I have arrived.”

If nothing else, this film is so damn thirsty for attention. This trailer tries so hard to convince me that THE HUNT will be the most controversial thing I’ll ever see, with big bold typeface flashing across the screen with rhetoric like “DECIDE FOR YOURSELF” and “THE MOST TALKED ABOUT MOVIE OF THE YEAR.” Blumhouse’s marketing team clearly wanted to pitch THE HUNT as something akin to the next Joker, a film critics will tell you is dangerous and want to keep you from seeing, but that you should go see just to have your own opinion on it. And that slant in their marketing makes it difficult to tell whether the truly awful quotes featured in the trailer are taken out of context to make the movie seem off-color, or whether what we’re seeing is what we’re going to get. 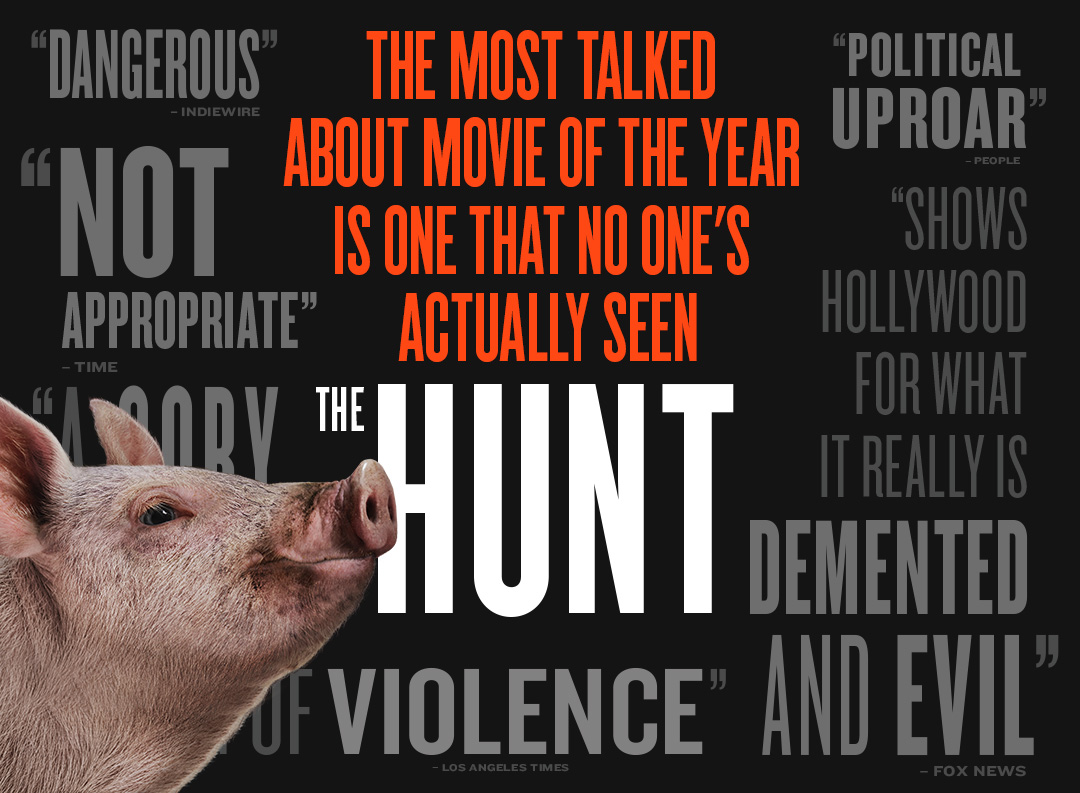 Listen, violence isn’t really the issue here. Was there any uproar when The Belko Experiment came out, a film that (just as violently and perhaps more brutally) pitted coworker against coworker in an hour and 30-minute-long massacre? No. How about when Ready or Not was released, a film that relied on locking its protagonist in an enclosed space against a variety of armed opponents and ended (slight spoiler) with multiple geysers of blood washing over our protagonist? Not a fucking peep. The reason why there’s so much controversy over this film is because at best, THE HUNT’s politics seem muddled and misguided. At worst, THE HUNT seems irresponsible, dismissively poking at concerns over climate change and representation while not going any deeper in its own messaging than “guns good, liberals bad.” Like Joker, it may not be quote-unquote “dangerous,” but the flaws in its messaging could certainly lead to the exact opposite of the director’s aim: instead of opening people’s minds and encouraging compassionate dialogue about the differences in our experiences, THE HUNT seems more likely to provide ideological fortification for its audiences’ ideological echo chambers.

And look, forget the critics, right? I’m just one person who loves horror movies, has a liberal slant, and has mixed feelings on Blumhouse’s recent output. I’m basing an entire blog post off a trailer that spans about a minute and 30 seconds. Subsequent trailers have hinted that perhaps there is a personal motivation behind the abductions, that the movie has more to offer than shallow political satire. Maybe you should ignore me, ignore all the thinkpieces that this movie will no doubt inspire, and go see it for yourself.