The world’s longest continuously-running horror toy line, Mezco Toyz’s Living Dead Dolls has been bewitching fans for 20 years now. Since 1998, several hundred different dolls have been produced, and with the recent release of numerous new offerings, including a 20th Anniversary Series (consisting of updated versions of fan favourites Damien, Eggszorcist, Sin, Posey, Sadie and Candy Rotten), and several Living Dead Dolls Presents movie-themed releases (including the titular threat from The Nun, Michael Myers and a talking Freddy Krueger), this line of creepy-cute dolls shows no signs of slowing down. 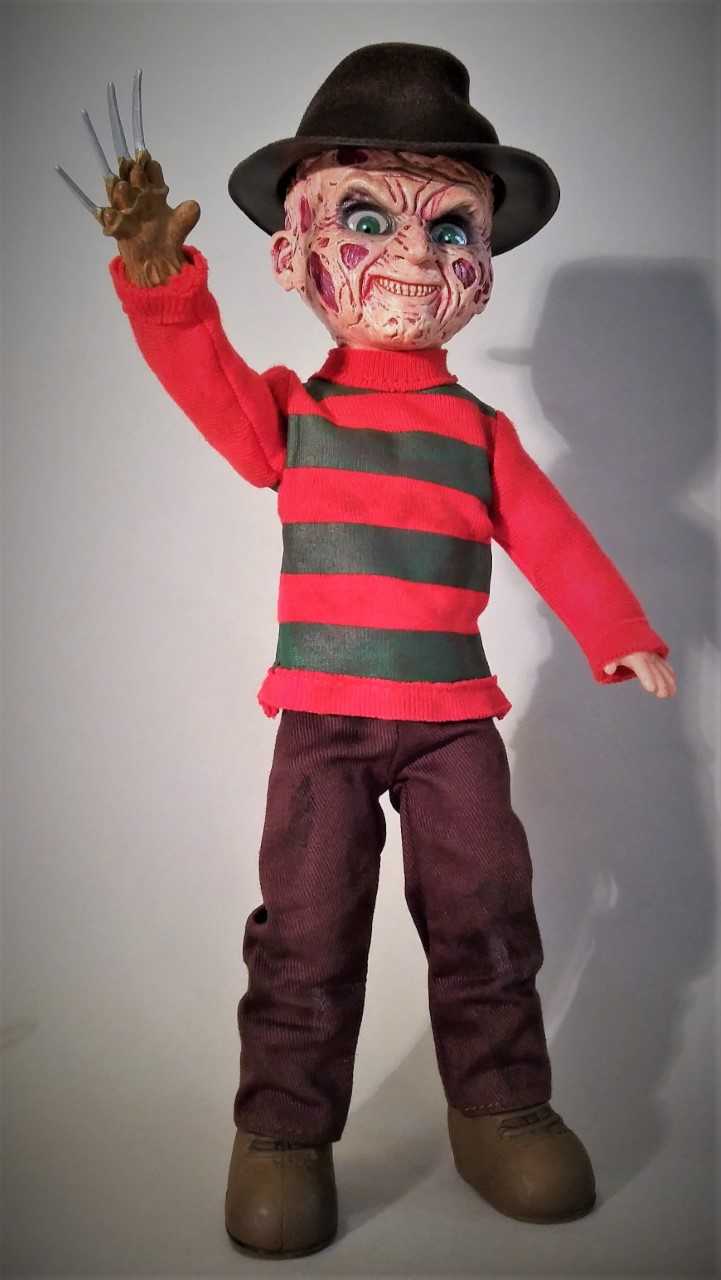 Based on his appearance in Wes Craven’s original A Nightmare on Elm Street, the 10-inch tall Freddy sports a fantastic all-new grinning head sculpt that differs from Mezco’s previous Krueger doll from 2010, and is wearing the sweater that is distinctive to that first film (green stripes featured only on the torso, and not on the sleeves). Completing the doll’s outfit is distressed brown fabric pants, soft plastic boots and a removable flocked fedora. The character’s infamous razor-fingered glove is molded on the toy’s hand.

Employing a sound feature that Mezco has used on only a small handful of its Living Dead Dolls so far, this pint-sized maniac recites seven phrases (in what sounds like actor Robert Englund’s voice) that appear to be taken directly from the Elm Street films, and users can access the function by pressing a button on the doll’s back. The battery compartment is located directly above the button, and the doll uses three LR44 (1.5 v) batteries (which are included). Featuring five points of articulation, the doll has movable arms, legs and head, and the pinkish “burnt skin” paint application extends to the entirety of the doll. 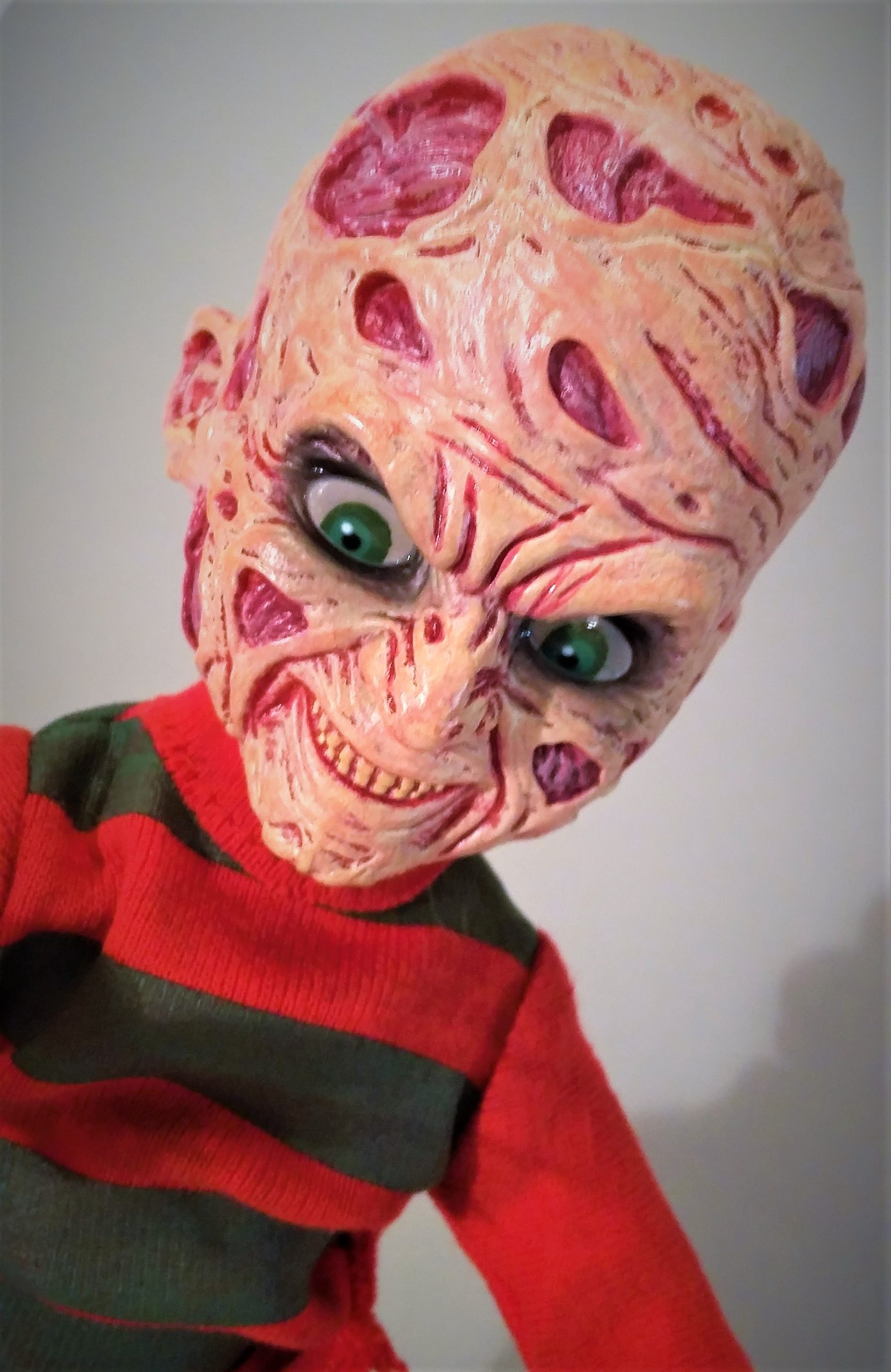 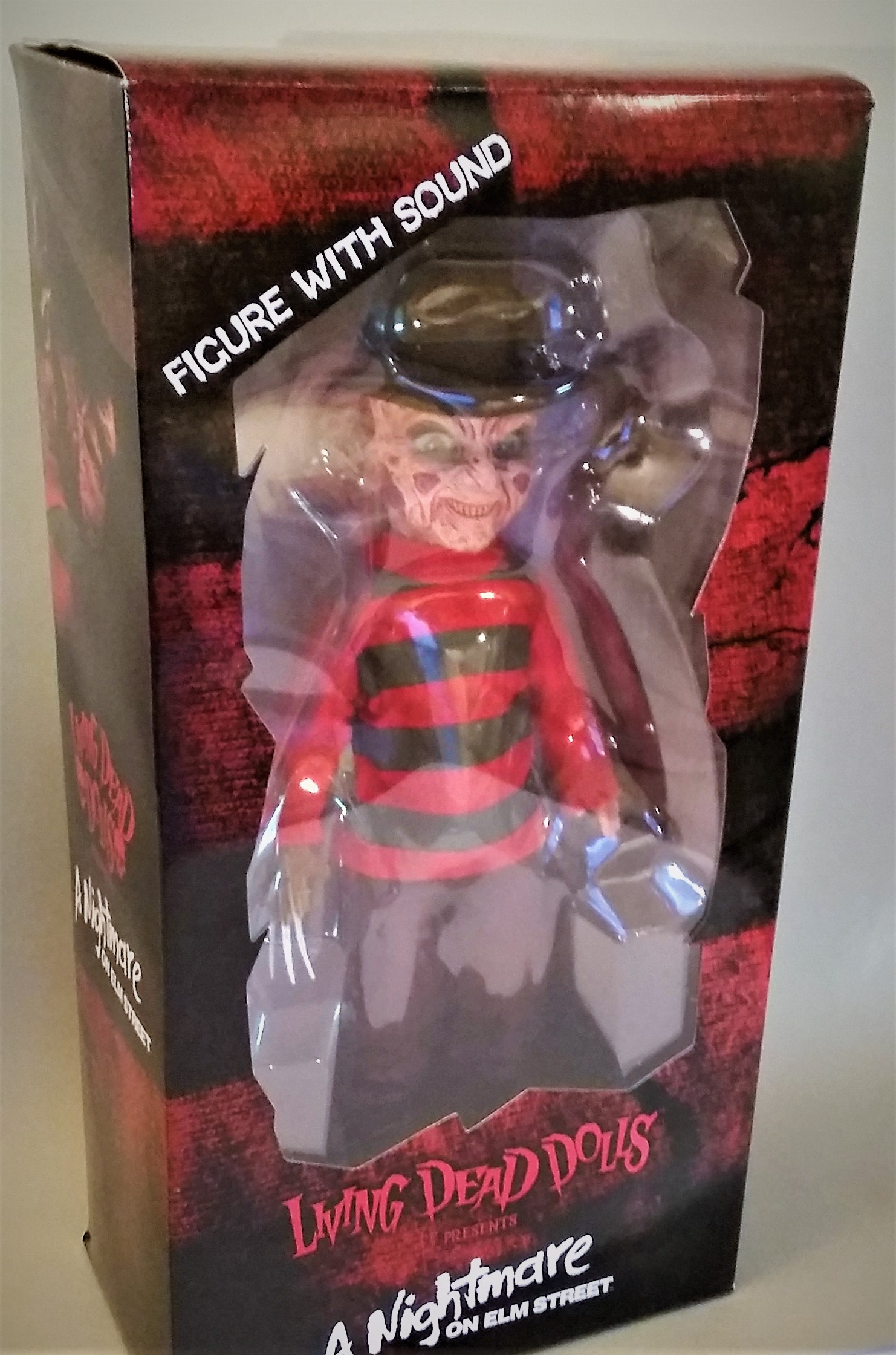 About James Burrell
James Burrell has been fascinated with monsters and all things scary since the age of three. Growing up in Toronto during the 1970s and ‘80s, he fed his insatiable appetite for horror with a steady diet of Hilarious House of Frightenstein and Saturday afternoon TV matinees of Universal, Hammer and Amicus flicks – all while eating too many bowls of Count Chocula, Boo Berry and Franken Berry. An avid collector of monster figures, model kits, vintage board games, tie-in novels, records, comics and movie posters, James continues to search for that next item to add to his eclectic and ever-growing collection of horror ephemera. He is the recipient of the 2010 Rondo Classic Horror Award for Best Interview, for his feature on Sir Christopher Lee that appeared in Rue Morgue’s 100th issue, and has penned two volumes in The Rue Morgue Library.