“LORD OF TEARS’ ” Owlman lives in “THE BLACK GLOVES,” now on disc and VOD

The Scottish creators of LORD OF TEARS and their viral-sensation villain the Owlman are back with the Gothic chiller THE BLACK GLOVES, which sees release today. Read on for the details, filmmaker comments and the trailer.

Directed and produced by Lawrie Brewster and scripted and edited by Sarah Daly, THE BLACK GLOVES stars Spanish genre favorite Macarena Gomez from SHREW’S NEST and DAGON, Nicholas Vince from HELLRAISER and NIGHTBREED, Jamie Scott-Gordon and Alexandra Nicole Hulme. According to the official synopsis, “THE BLACK GLOVES tells the story of a psychologist obsessed with the disappearance of his young patient, and the menacing owl-headed figure that plagued her nightmares. His investigations lead him to a reclusive ballerina who, just like his patient, is convinced that she is about to die at the hands of this disturbing entity. In the bleak Scottish highlands, Finn counsels his new patient, under the watchful eye of her sinister ballet teacher. He soon finds himself entangled in a ballet of paranoia, dark agendas and a maze of deadly twists and turns, as the legend of the Owlman becomes a terrifying reality.”

THE BLACK GLOVES is now available at Amazon Video, and on a three-disc Blu-ray/DVD collector’s edition that can be ordered at the official website of Brewster and Daly’s Hex Studios. The NTSC/PAL region-free set includes a CD of the soundtrack and the following special features: 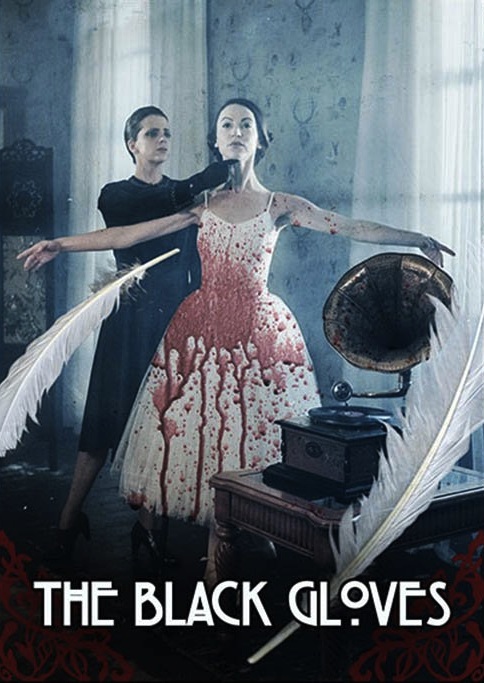 In the tradition of recent films like A GIRL WALKS HOME ALONE AT NIGHT, THE EYES OF MY MOTHER and A FIELD IN ENGLAND, THE BLACK GLOVES was shot in atmospheric black and white. Brewster explains, “I’m a huge fan of classic chillers, from Hitchcock’s REBECCA to THE INNOCENTS and THE HAUNTING, so we looked to those films for inspiration in terms of style and expression, but I think we’ve created something very fresh and new with THE BLACK GLOVES, and avoided emulation for its own sake.”

Daly, who also previously collaborated with Brewster on the folk horror film THE UNKINDNESS OF RAVENS, adds, “We always aspire to make films that are entertaining to watch, with twists and turns that keep you on the edge of your seat, but it’s important to us that they also have something to say. Behind the thrills and dread of THE BLACK GLOVES, there’s a story about power, obsession, and gender politics.”

Find out more about THE BLACK GLOVES and other Hex Studios productions at their Facebook page.