Thanks to the sanitizing influence of Disney, murder and mutilation are probably not what come to mind when most of us think of fairytales. Nevertheless, such gruesome subject matter was often the cornerstone of the German folktales collected by brothers Jacob and Wilhelm Grimm in the early 19th century. Originally published as Children’s and Household Tales (Kinder und Hausmärchen), the 211 stories now known collectively as Grimm’s Fairy Tales could hardly be categorized as wholesome family entertainment. Filled with sex, violence, incest, dismemberment, eye-gouging, and worse, the original Grimm’s Fairy Tales have more in common with the work of Lucio Fulci than the animated, Technicolor spectacles of Uncle Walt and company.

Mad Cave Studios, best known for the fantasy comic Battlecats, hopes to restore the work of the Brothers Grimm to its original bloody glory with GRIMM TALES FROM THE CAVE, a new graphic anthology that updates the original Grimm’s tales with a modern twist. Featuring terrifying new takes on both well-known tales and more obscure stories from the Grimm’s canon, GRIMM TALES FROM THE CAVE offers a mix of writing and art styles sure to satisfy the full spectrum of horror comics fans from lovers of the grim and ghastly to those with more whimsical tastes. 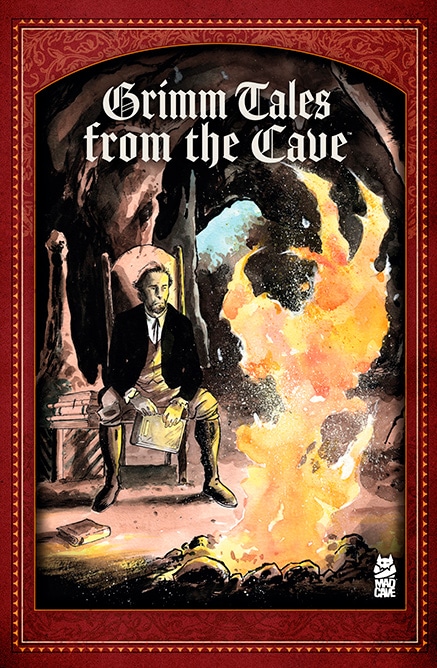 Although it would have been easy for Mad Cave to stick with the Brothers Grimm’s most famous stories (and a couple of those are represented including terrifying retellings of “Rapunzel” and “The Pied Piper of Hamelin”),  GRIMM TALES FROM THE CAVE focuses largely on lesser-known tales such as “The Handless Maiden,” which is recast as a story of misplaced guilt and revenge in “The Girl with Dirty Hands,” and “Death’s Messengers” updated with a post-apocalyptic setting as “Billie and Her Friend Death.”

GRIMM TALES FROM THE CAVE definitely delivers as a ghastly exercise in comic book horror in both its writing and art, yet the anthology is not without its moments of beauty, poignancy, and humor. Overall, the best stories in the volume are the ones that stray from literally retelling or updating the original tales and instead recontextualize them in unexpected ways as in Nadia Shammas’ “Hello My Name Is. . .” which hilariously transplants”Rumpelstiltskin” into the soul-deadening world of modern office work.

As with any anthology, some stories work better than others. A few miss their narrative and allegorical marks. “Pay the Piper” and “Birds of the Feather,” based on “The Pied Piper of Hamelin” and “Fitcher’s Bird,” for example, would probably have benefited from hewing a little closer to their source material. Nevertheless, the art in even the weaker entries makes every story in the volume worth reading.

If GRIMM TALES FROM THE CAVE has one glaring fault, it’s that the titles of the fairy tales on which the stories are based are not listed or otherwise referenced for readers who would like to seek out the originals. Still, GRIMM TALES FROM THE CAVE is an effective horror anthology with a novel concept that demands more exploration. Mad Cave has barely scratched the surface of the horrors that classic fairy tales have to offer. With around 200 more stories in the Grimms’ canon, horror fans should keep their fingers crossed for future volumes.

GRIMM TALES FROM THE CAVE from Mad Cave Studios arrives in comic stores on October 27.