Movie Review: Megan Fox Learns That “TILL DEATH” Is Not The End

“I always get people saying, ‘Nobody looks better covered in blood,’” Megan Fox told InStyle only a few days ago, in her pseudo-official first interview since returning to the public eye. “If you ain’t killed me yet, you’re not going to kill me.” The same could be said to be true of Fox’s character in S.K. Dale’s directorial debut, TILL DEATH; wherein Emma’s (Fox) ingenuity is pushed to its farthest reaches as she fights to survive the brutal assault of her husband’s lakeside mansion, all while shackled to his freshly bloodied corpse.

As the film’s shaky yet slick opening scenes reveal, Emma has been carrying on an affair with a coworker of her husband’s – an affair she breaks off just before her eleventh anniversary with Mark (Eoin Macken). After gifting her a choker made of steel at their tense celebratory dinner, Mark blindfolds Emma for the drive to her second ‘surprise,’ a wintery getaway to the couple’s secluded lakehouse. Yet the dream turns into a nightmare when Emma awakens, witnesses her husband’s death, and must drag his body’s dead weight around as she searches for an escape route. The film truly kicks into gear with the arrival of a violent man from Emma’s past (Callan Mulvey), sent to prison by ex-district attorney Mark years before, who comes collect compensation from the diamond-loaded safe in their bedroom. 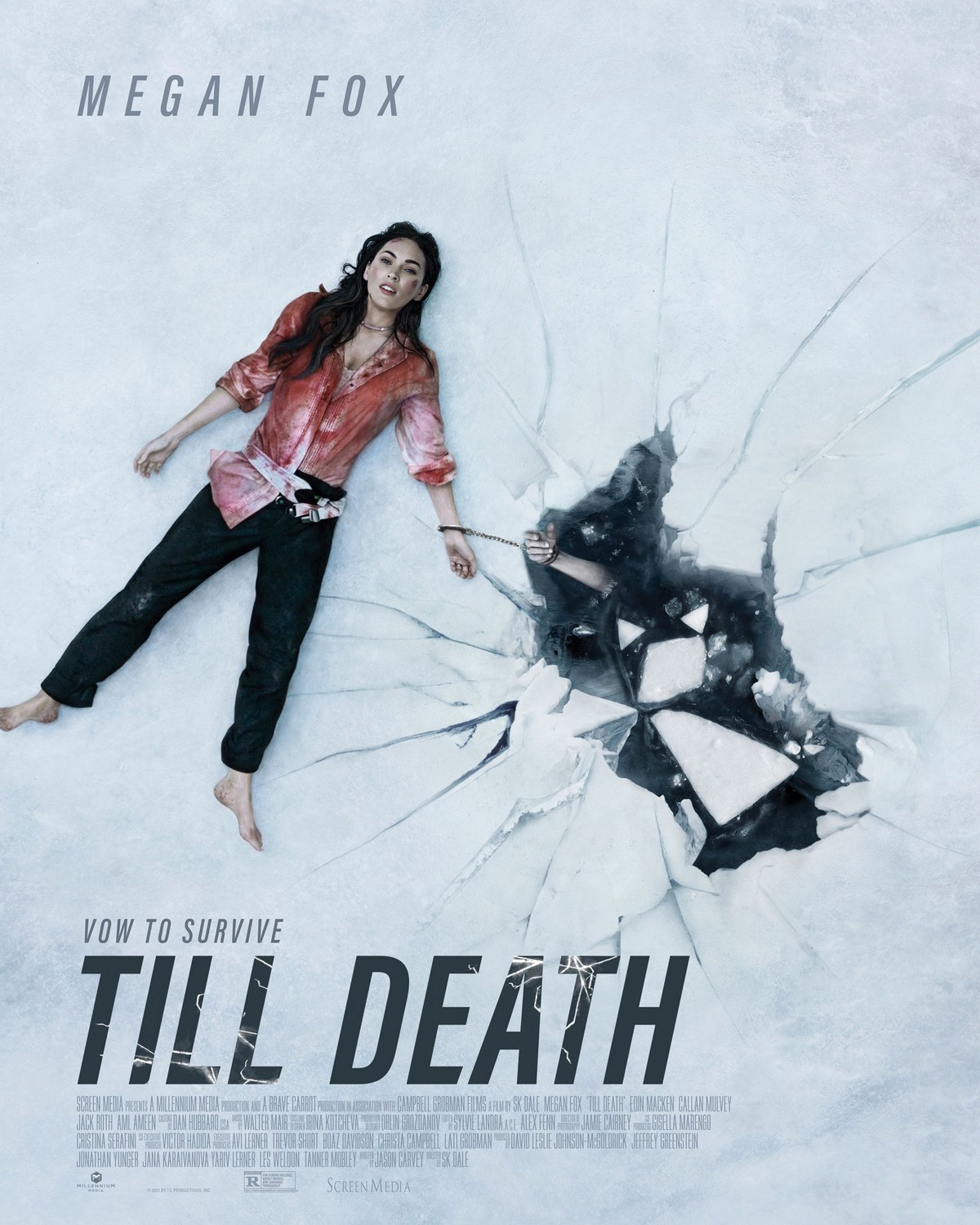 TILL DEATH is a well-constructed if poorly-dialogued (mostly) single-location thriller that tips over into horror with a healthy helping of violence and gore. While it may not be winning any awards, TILL DEATH functions perfectly as a vehicle for the underrated star power of Megan Fox and an unexpectedly welcome supporting performance from Jack Roth, son of Tarantino-favorite Tim Roth, who plays the younger brother of the film’s main antagonist. TILL DEATH is at its best while in the midst of suspenseful action setpieces, propelled forward by the deeply aesthetically pleasing cinematography of accomplished DOP Jamie Cairney.

To see Megan Fox back on screen – and covered in blood as the gods intended – is not only a delight but something of a relief as well. As all die-hard Jennifer’s Body fans have learned the hard way, defending Fox from those who refuse to take her seriously can be a bit of a full-time job. However, I am thrilled to say that in spite of all odds, Megan Fox has still got it. To say she carries the film would be an understatement, and I wish I could say with certainty that she’ll never be underestimated again.

Despite its more melodramatic leanings and overwrought depiction of upper-class marital strife, TILL DEATH is not an unintelligent film. Nearly every action taken by Emma to ensure her survival feels like the right one, and the unlikely visual gags land solidly as she struggles to evade her attackers. It may watch like a high-budget B-movie, but since when did us horror-lovers ever have a problem with that? All rise, all hail – because Megan Fox is back.

TILL DEATH is available now on VOD and rentable for early access on Amazon Prime Video.