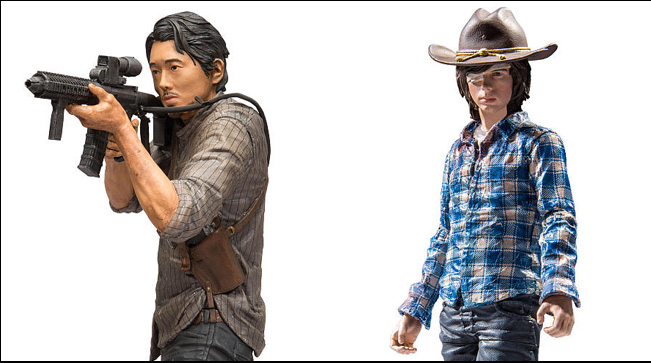 McFarlane Toys has been in the mix for many years now, with action figures based on film properties (the Movie Maniacs line), characters spawned from the mind of Clive Barker (Tortured Souls) and everything in between. One of its newest and most popular lines is inspired by AMC’S THE WALKING DEAD TV series.
This isn’t the first time McFarlane has ventured down this path, as the company has been releasing popular figures based on the WALKING DEAD graphic novels for many years now. It’s cool that they’ve kept the two lines separate, however, as the characters in the two media look quite different from each other, and more zombies equals more fun. For this review, I took a closer look at a few of the figures from McFarlane’s AMC run, and really enjoyed what I saw. 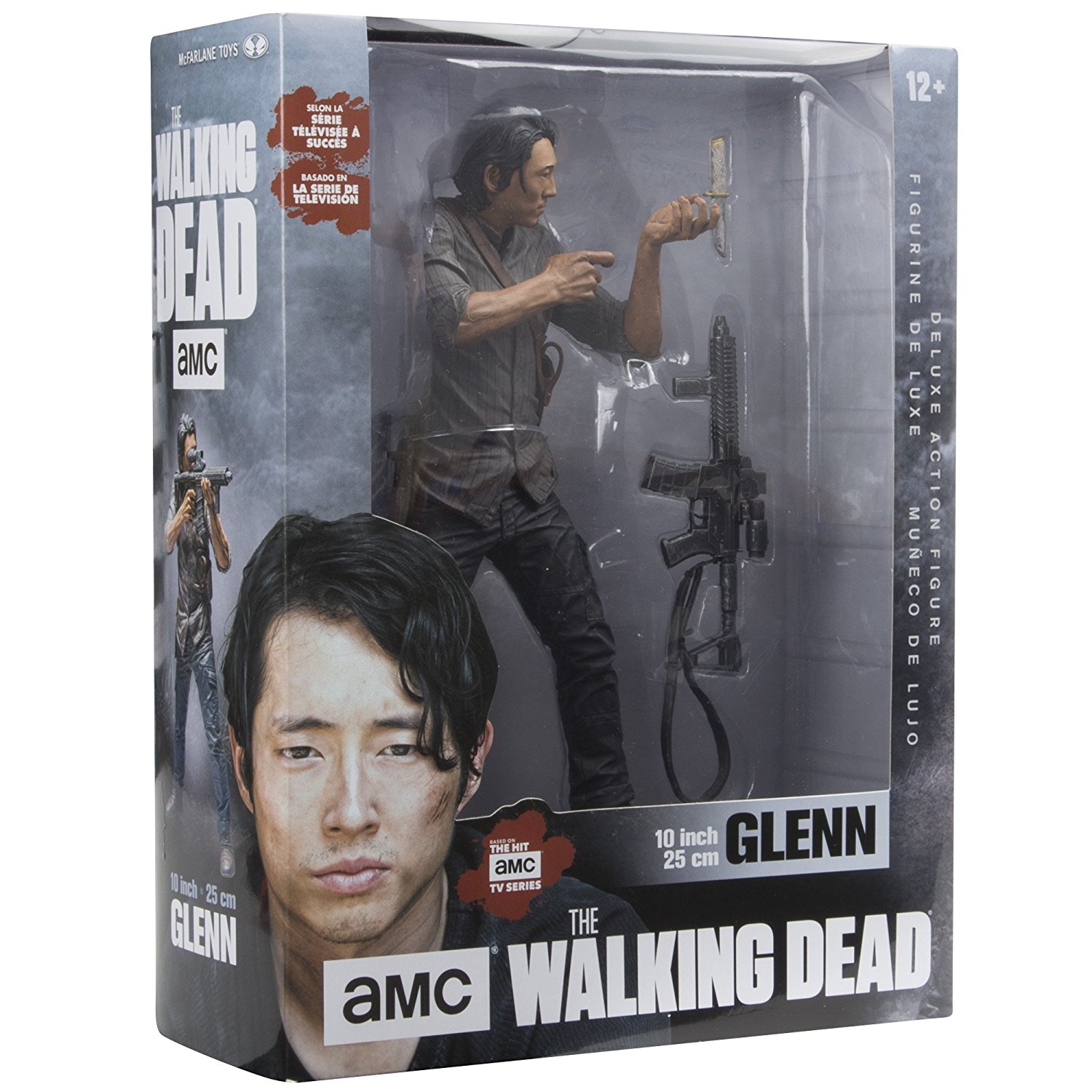 The first is a 10-inch Glenn Rhee Deluxe edition (there’s also a Legacy Bloody version). This figure is derived from 3D scans and boasts an eye-popping likeness of Glenn actor Steven Yeun (inspired by the character’s look in seasons 5 and 6). Not only does it boast a spot-on likeness, it comes with a scoped assault rifle, knife and black base for posing. The one drawback to McFarlane’s 10-inch line is limited articulation, as opposed to its highly poseable 5-inch figures, but while this Glenn can’t be posed as well as its smaller counterpart, he looks more like the actual performer, which is always a good thing.
This accuracy is one reason McFarlane is a leader in the action-figure market, and it’s also demonstrated in the 7-inch Color Tops Blue Wave edition of WALKING DEAD’s Carl Grimes. This one also matches up perfectly with the actor who plays the role (Chandler Riggs) in season 5. Carl comes with two heads (one with the bloody hole where his eye once was, and one with a bandage over it), as well as a removable bloody poncho and removable hat. It has many points of articulation and stands tall on a beautiful AMC branded base. I personally have an affinity for the Color Tops WALKING DEAD figures; they store well and are easier to display in a limited amount of space. 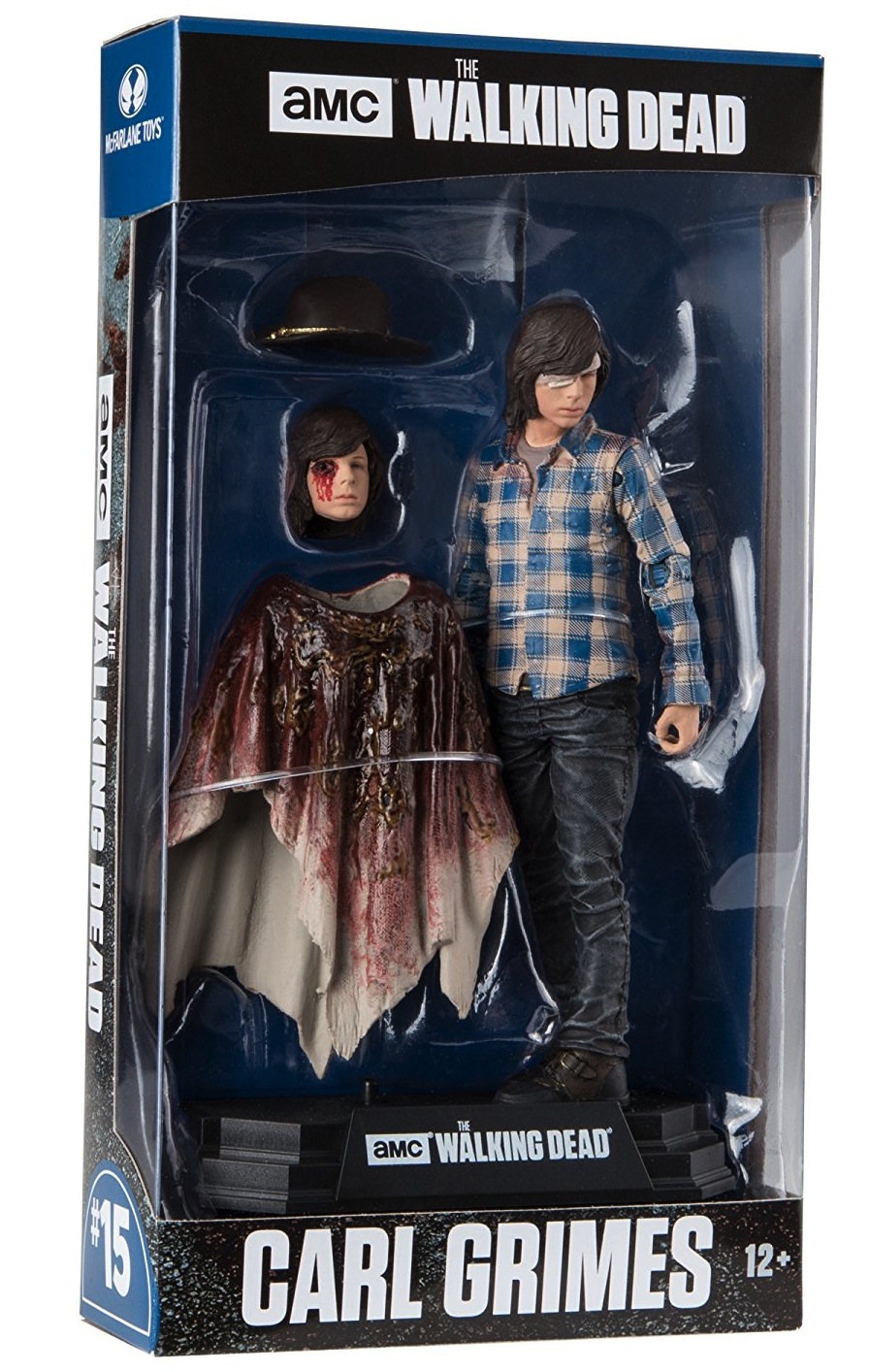 Moving to the accessory side, it’s hard to say which is more popular among WALKING DEAD fans: Negan or his sweet weapon Lucille. McFarlane’s 32-inch replica of the latter lives up to its onscreen intimidation factor. One thing to note right off the bat (yeah, I said it) is that this Lucille is not made of real wood, but plastic; you could never tell by looking at it, though. The paint job is what really makes it work—it’s stunning, and everything you’d want from a recreated prop. It sports identical markings and barbed wire (also plastic) to the Lucille carried by Jeffrey Dean Morgan on the series, and all 32 inches are shown off spectacularly in the window-box packaging. This has been a favorite item since I purchased it; it weighs in at about four pounds, but looks so realistic you’d think it was heavier. McFarlane has also released a Bloody Lucille version, and either one is a must-have for WALKING DEAD fans.
THE WALKING DEAD is a series with endless possibilities, and given the quality and technology of the likeness renderings on these and other figures, I can’t wait to see what McFarlane has in store for this line in the future. Check out these and more of the company’s figures at its official website.