Moments in Moviemaking with Adam Stovall

Adam Stovall’s low-budget supernatural romance A GHOST WAITS is a heartwarming and heartbreaking story of a man and woman finding love across the boundaries of life and death. In his conversation with Rue Morgue, Stovall talks the planning and production of his first feature film and explores the emotional backbone of this frightfully moving little movie. 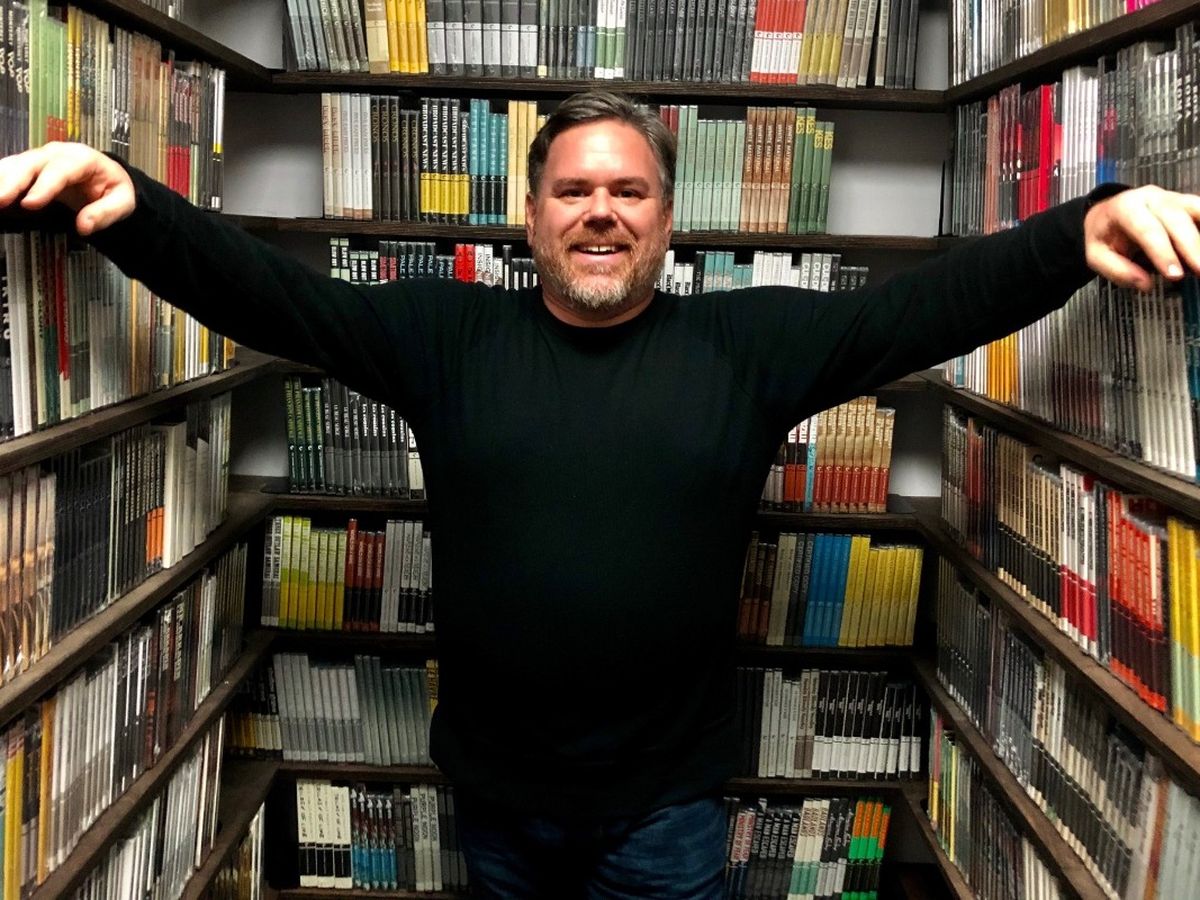 What was the process of writing A GHOST WAITS like? Are there any major inspirations you and your co-writers were drawing from?

This was by far the fastest I’ve written a script. I had the idea in late 2015, we had our (admittedly small) budget in January 2016, and we were in production in August 2016, so I just pretty much hit the ground running. The two main inspirations were a video game and a webcomic. The video game was P.T., a very creepy and atmospheric first-person haunted house puzzle game designed by Guillermo del Toro and Hideo Kojima. My friend Jenn and Brian Price invited me over to play it one night, and I had them cracking up laughing because I was reacting to it the way I would normally react, which is basically “Nope, I don’t think I will investigate that weird noise, thank you very much. I’m good where I am.” When Jenn pulled her phone out to record me, I started thinking about how I hadn’t seen a haunted house with a character like me at the center of it.

Sometime around then, I saw an issue of Saturday Morning Breakfast Cereal wherein a man asks a woman what she thinks is the most American movie and she says, “That’s easy, Ghostbusters! Here you have demonstrable proof of an afterlife, but the whole thing is about growing a small business and navigating government bureaucracy.” I thought, “That’s hilarious, but also yeah she’s right! A ghost does mean there’s an afterlife. I would have so many questions!”

Those two things formed the spine, and then it was just on me to sit down and think about what I found interesting and what I hadn’t seen before in ghost stories. I didn’t really have specific films in mind when it came to actually conceiving and producing the film, though. At this level of filmmaking, your greatest resource is your own curiosity and ingenuity. We knew we couldn’t afford to do anything big, so simplicity became the name of the game. I wanted to say something I hadn’t heard before, and hopefully, have fun doing so.

Can you talk a bit about your choice to produce the film in black and white?

I love the B&W aesthetic. I love old movies. I knew there was no guarantee I’d get to make another movie, so I wanted to make some choices that I’d still be happy with and excited by years down the line if this was the only chance I ever got. I mentioned this to my UPM, Chenney Chen, while on a location scout one day and she immediately said, “No. Absolutely not.” Which is fair! B&W is a hard sell, we got a lot of ‘no’s from festivals and distributors simply because of the B&W. So we shot in color and planned to release it in color, but then we had to do a couple of sets of pickups to address some problems in the first act. Michael C. Potter shot principal photography, but I shot the pickups. He’d had a minimal lighting rig, whereas I was using natural light. This led to a little bit of dissonance between the images. I was trying to bridge this with color-correction, but I just couldn’t get them to meet. Finally, one day, MacLeod asked, “Have you thought about making it B&W?” So I dropped a B&W LUT (color-correction algorithm) on the image, and immediately it felt right. Especially seeing Muriel (Natalie Walker) in B&W, it was just perfect. It’s funny how often technical and creative decisions are one and the same.

Macleod Andrews and Natalie Walker have very compelling on-screen chemistry in the film. What was your experience directing the two of them?

MacLeod and Natalie are the best. I was very much learning on my feet, and they were just wonderful partners. They actually met on set! The first scene they shot together was the scene at the end when Muriel sings to Jack (Andrews). I’d already known MacLeod for years, and in talking with Natalie I just had a feeling she’d fit in with the general vibe we were going for. Both have a theatrical background, so they’re also very accustomed to digging into the text. This was hugely beneficial because I was doing so many jobs on the film that I didn’t always have time to talk through things. They just teamed up and crafted this really great dynamic for the characters. Everyone should hire them and pay them lots of money.

A GHOST WAITS juggles comedy, romance, and horror. What were your aims when constructing the mood and tone of the film?

It’s funny but this sort of tone just makes sense to me. It’s life, y’know? Life is funny and sad and euphoric and horrific. So I guess I just felt like if I presented everything in a simple, straightforward manner, it would foreground the honesty and vulnerability, and hopefully that would all make sense to the audience.

A GHOST WAITS was your directorial debut; do you have any advice for first-time filmmakers?

It’s going to take longer and cost more than you think. Also, hire a lawyer. Honestly, I think the best things you can have going into your first film are respect and humility. Respect your collaborators, their time and process. Respect your story, and let it take the time it takes. And remember that the movie is the boss, you are not the boss of the movie. Listen to it when it’s telling you something isn’t working, and be humble enough to allow your collaborators to offer ideas that are better than yours.

I remember that the ending of A GHOST WAITS particularly stuck with me as a viewer. Without spoiling too much, can you speak to your choice to have Jack and Muriel end up in the state that they do?

I knew I wanted to tell a story about depression as I experience it. Most movies that touch on this subject do so with the more overtly dramatic forms of depression, like bipolar or manic depression. For me, it’s far more banal than that. It’s wallpaper that tells you that you don’t deserve walls. As for the act that ends the story, I wanted to empathize with a societal taboo that I’ve struggled with throughout my life. Most people, when you talk about [REDACTED], immediately shout you down or hand-wave it away saying “Not that anyone should ever do that.” Which is just very unhelpful. It’s hard enough to talk about this stuff without people telling you that you’re wrong for even thinking about it.

For me, movies have always been there when I’ve been at my lowest, so I wanted to do that for someone else. Sometimes we just need a hug but don’t know how to ask for it. This is me offering a specific hug to everyone who needs it.

The horror/rom-com is undoubtedly a niche genre. Do you see yourself pursuing horror-related projects in the future?

I think so, yeah! I have a script for an existential horror chamber piece that I’m still optimistic about and excited to make, and I have a new idea for another horror film that I hope to write soon. I pretty much write whatever is fascinating me at the moment.

Are there any other upcoming projects you’d like to hint at?

I’m currently writing a time travel road movie with some disaster movie sprinkled in. It’s the hardest I’ve ever worked on a script, but I think it’s pretty good. We have some interest in it, thanks to the amazing run we’ve had with A Ghost Waits, so there’s a decent chance we get to make it. Oh, and I’m producing a horror short about medical gaslighting this summer. I’ll let you know how they come together!

A GHOST WAITS is available now on VOD and Blu-ray through Arrow Video! Check out our review of the film here.