Two years ago, 47 METERS DOWN just barely escaped a direct-to-video fate and became a big-screen sleeper hit. Now comes the inevitable sequel, made for theaters but feeling like something produced for airing during Shark Week.

47 METERS DOWN: UNCAGED does boast some impressive production values, chiefly Mark Silk’s cinematography, which is handsome during the above-water introductory scenes set in Yucatán, Mexico (though filmed in the Dominican Republic) and properly gloomy and moody in the submerged settings where much of the action takes place. The dramaturgy is strictly low-rent, though; where the original film established the nightmarish situation its pair of heroines are plunged into and developed their reactions to it in plausible ways, UNCAGED presents four girls who keep finding themselves in danger because they do dumb things. 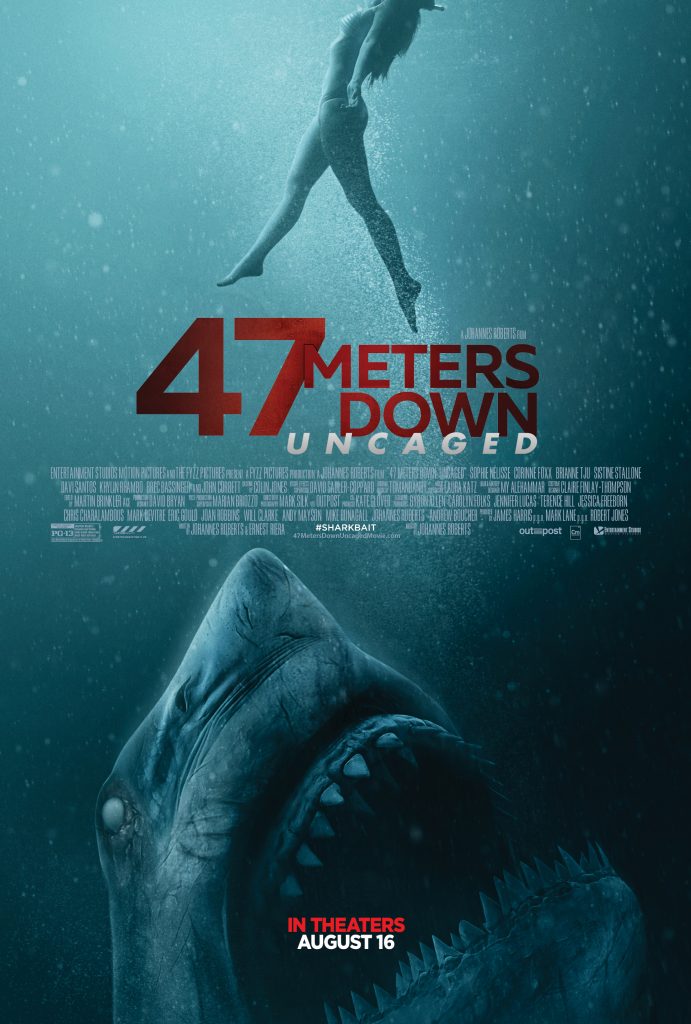 Our heroines are students at the Modine International School for Girls (an odd name-check of the first film’s co-star Matthew), where Mia (Sophie Nélisse) is the odd girl out. She’s picked on by snooty classmates and treated as a nuisance by her stepsister Sasha (Corinne Foxx), who resents being forced to go on a shark-spotting tour with Mia when she just wants to hang out with her BFFs Alexa (Brianne Tju) and Nicole (Sistine Stallone). (Yes, Foxx and Stallone are the daughters of Jamie and Sylvester, though supporting actor Khylin Rhambo is no relation.) The quartet are, heh heh, fated to have far closer encounters with the killer fish after Sasha convinces Mia to ditch the outing and join Alexa and Nicole for a swim at a remote lake. As it turns out, this just happens to be an entrance to an ancient, flooded Mayan cave system that Mia’s archaeologist dad Grant (John Corbett) has been exploring, and his team has left some hi-tech scuba gear lying around. And so, after the requisite bikini-clad frolicking, Alexa convinces the others to take a quick dive to check out just the first cavern. What could possibly go wrong?

Well, apparently Mia forgets that Grant has just given her a great white tooth he’s found on a recent jaunt into those depths, so down they go. Soon, one of them is spooked enough by an odd-looking fish that she causes a cave-in that forces them deeper into the underwater passageways. And then the sharks start showing up. Encoring director Johannes Roberts, who once again scripted with Ernest Riera, introduces the first of the predators in an offhand manner that sends a real chill up your spine, and here and there delivers a quick jolt as they suddenly appear or chomp on a hapless victim. Yet the terror would be more sustained if these shark-bait characters weren’t so obvious they should be wearing red scuba suits, and if the script didn’t force the girls to behave in foolish ways to send them deeper into danger (see: fish-scare cave-in above).

Rather than focus on the kind of problem-solving that kept us engaged with the original movie’s heroines, UNCAGED is largely concerned with the girls making their way from one chamber to another in various levels of panic, punctuated by great white attacks. At some points, their struggles become frenzied to the point where it’s hard to tell them apart—not that these generically characterized girls were especially distinctive above water. The sharks are a little more unique, having bred in those caves for many years (though it’s not explained what they fed on; that scare-fish doesn’t appear to have any relatives) to the point of becoming albino and blind, dependent—albeit inconsistently—on sound to hunt. Roberts does elicit a claustrophobic mood, and one can be impressed that he pulled off what was no doubt a physically challenging shoot—more so than by what he fills those caves and passageways with, including bald-faced lifts of memorable scare scenes from JAWS and DEEP BLUE SEA.

As it nears the climax, 47 METERS DOWN: UNCAGED takes a plot turn with a gruesomely amusing sense of irony, followed by action that, while thoroughly ridiculous, is played with such a straight face that it’s almost endearing. The movie could have used more of this over-the-top, what-the-hell bravado—especially since it can’t match the human survival drama that anchored its predecessor.