Movie Review: “A QUIET PLACE PART II” is a sequel to shout about

Its lock-and-load ending notwithstanding, A QUIET PLACE didn’t seem to lend itself to a follow-up film—certainly not one that could recapture its specific and significant qualities. Yet with John Krasinski back on writing/directing duties, A QUIET PLACE PART II is everything a sequel should be, and the circumstances under which it is opening this Friday, over a year after its release was pre-empted by the pandemic, have only bestowed additional relevance upon it.

While it can’t be the revelation its predecessor was, PART II very successfully expands on the 2018 hit’s themes and mythology, enriches its central characters and fully delivers on the scare power of the long-limbed, rapacious, sound-hunting creatures that have decimated the world’s human population. Krasinski begins the film by taking us to “Day 1” of the invasion, just before the Abbott family and their fellow small-townspeople are first attacked by the carnivorous invaders, making their origins concrete and giving himself a little screen time. Back when the movie first screened in March 2020, a brief glimpse in this prologue of a TV news headline touting the “Shanghai Death Toll” added an unintended but timely bit of shivery relevance; seen now, A QUIET PLACE PART II has even more as it rejoins the Abbott family after more than a year of self-imposed, fearful isolation. 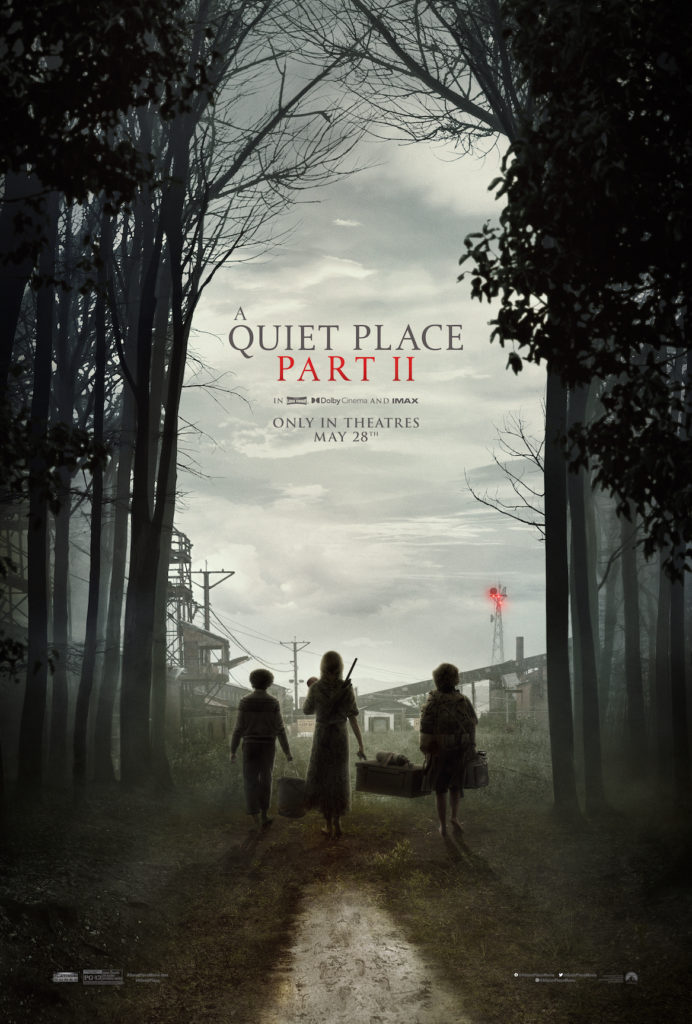 Picking up directly where the original left off, A QUIET PLACE PART II finds Evelyn (Emily Blunt), her hearing-impaired daughter Regan (Millicent Simmonds), her son Marcus (Noah Jupe) and her baby on day 474 of the occupation as they shelter from the vicious, prowling predators. This time, circumstances lead them to venture outside the farm that has been their sanctuary, and amidst finely wrought details of the greater, desolate environment, they come across another survivor, family friend Emmett (Cillian Murphy). He’s been sustaining himself alone for quite some time, part of the film’s unintentional, concise summation of the situation our real world has found itself in since last spring, which continues as the Abbotts encounter larger groups who have adapted in widely differing ways and attitudes to their perilous times.

Our little group winds up separating along the way; often in screen scenarios like this, dividing attention between distant characters dissipates the tension, but Krasinski makes it work for A QUIET PLACE PART II. Truly coming into his own as a filmmaker, he handles this more wide-ranging scenario with the skill of a veteran, demonstrating in that opener that he’s got real chops at larger-scale, pell-mell, long-take, hair-raising action, before returning to more intimate terrors and tensions for the bulk of the movie. Building nerve-wracking suspense through his cross-cutting among the Abbotts and tying the scenes together via visual motifs, with finely tuned contributions by cinematographer Polly Morgan, composer Marco Beltrami and sound designers Ethan Van der Ryn and Erik Aadahl, he just as crucially invests us fully in his imperiled people. While Blunt is solid and sympathetic and has several moments to shine as Evelyn, Krasinski has actually given her almost a secondary role, with the lead now taken by the gifted young Simmonds. Having inadvertently discovered the creatures’ Achilles’ heel in the first movie, Regan is anxious to find and help others, and her yearning to connect in a ravaged world, and the bravery and fortitude Simmonds projects without delivering a single line of dialogue, form the true dramatic center of A QUIET PLACE PART II.

Regan is an avatar of valiant optimism in the face of multiple threats, some of which come from people. Where the humans-can-be-the-real-monsters idea is concerned, the film occasionally feels like it’s headed into familiar territory, only for Krasinski to put an unexpected spin on it. At the same time, he assures that the actual creatures are never sidelined and once again carry a true sense of threat, whether it’s one of them stalking a single hiding human or setpieces involving multiples of both. In the supporting roles, Jupe also engages our sympathies, while Murphy and Djimon Hounsou are compelling additions to the ensemble. Yet even as it expands the QUIET PLACE world, PART II, in the end, narrows its focus back down to the principals and principles that really count. While it continues Krasinski’s potent rooting of sci-fi scares in relatable family dynamics, this is one sequel that feels fresh.