Kevin James demonstrates that he has the physical but not the dramatic heft to carry the role of a neo-Nazi skinhead baddie in BECKY, while frequent horror child actress Lulu Wilson makes the stronger impression in the title role. Possessed and terrorized in the likes of OUIJA: ORIGIN OF EVIL, ANNABELLE: CREATION and THE HAUNTING OF HILL HOUSE, she graduates to young-teen badass-dom in this sort of horrific HOME ALONE, and provides a spark that the plotting, and some of the other performances, could have used more of.

She plays Becky Hooper (cf. Tobe?), who is mourning the death of her mother and incensed that her father Jeff (Joel McHale) has a new lady in his life. This portion of the story is fairly boilerplate drama as Jeff brings Becky out to the family’s remote vacation house to drop the bomb that he and Kayla (Amanda Brugel), who arrives with her young son Ty (Isaiah Rockcliffe), are getting married, which is bad news to Becky. And worse news soon raises its ugly head thanks to Dominick (James), who has just escaped custody with a trio of henchthugs; they commit a horrible crime that the movie doesn’t quite know how to deal with before turning up at that house to terrorize the family-to-be. They’re after a special key they’re willing to kill for, and that Becky and Jeff risk their lives to protect, but whose purpose and importance are frustratingly never explained. It’s merely a MacGuffin to maneuver Becky to a place where she can channel her sullen anger into violent action, taking on and taking out the bad guys. 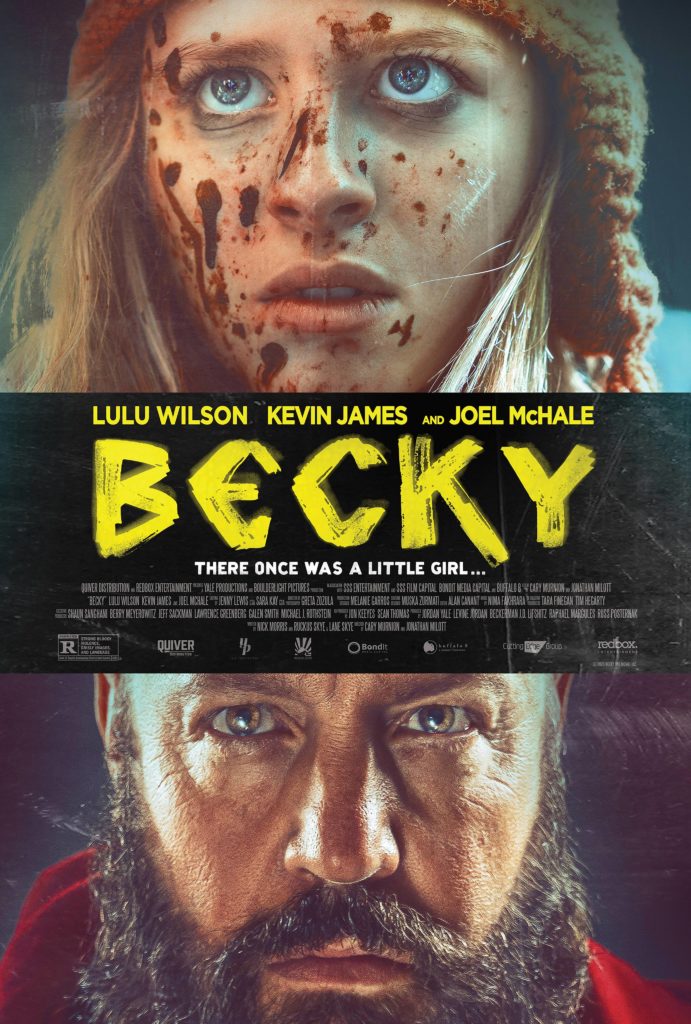 It’s a kick to watch the relish with which Wilson attacks her role as Becky gets her avenger on, and the film becomes startlingly grisly (including a bit of improvised surgery) as the action continues to heat up. Yet it might be easier to take Becky seriously as a junior Rambette—complete with arming-up montage—if she wasn’t wearing an animal-ears cap that makes her resemble Louise from BOB’S BURGERS. Indeed, BECKY’s occasional over-the-top situations and dialogue keep it poised on the edge of campfest territory, but it never quite gets there. Directors Cary Murnion and Jonathan Milott (COOTIES, BUSHWICK) pull off a few effective visual flourishes, though they had better material to work with in their previous films. In the opening scenes, they visually parallel the school where Becky feels imprisoned with Dominick and co. in an actual jail, but the script by Ruckus Skye, Lane Skye and Nick Morris gives them little opportunity to develop or explore this idea. Throughout, the film seems content to be trashy fun (which it does deliver) rather than engaging the opportunities to be something more. While it’s busy celebrating Becky’s girl power, African-American Kayla, who becomes a particular target of the swastika-tattooed Dominick’s wrath, remains a plot device rather than a character.

James brings the appropriate attitude to Dominick without eliciting an inner life for his villain; while the stunt casting is amusing for a while, and James doesn’t actually do wrong by the role, BECKY would have been stronger with a villainous lead who could deliver more than surface-level menace. (The role was originally filled by Simon Pegg, and one line evidently wasn’t revised after the recasting: Becky references “the fat one” in the gang, but isn’t talking about Dominick.) It falls to towering Robert Maillet (THE STRAIN, PACIFIC RIM), playing Dominick’s conflicted sidekick Apex, to deliver more gravity and threat in any one line reading than all of James’ performance. He, Wilson and the movie’s bursts of rude energy keep you watching, even as the overall experience falls short of satisfying.