If you see one horror movie this year based on an adolescent boy’s crush on the gorgeous girl looking after him…well, make it BETTER WATCH OUT, since the Netflix original THE BABYSITTER, which premiered on Friday, isn’t nearly as adventurous or effective in its scares or its comedy as it seems to think it is.

The title character is Bee (Samara Weaving, game but seen to better effect in Joe Lynch’s MAYHEM), a blonde teen dream who’s a geek’s wish-fulfillment fantasy in more ways than one. Not only is she totally hot, she shows genuine big-sisterly affection toward her 12-year-old charge Cole (Judah Lewis), defends him from bullies and shares his enthusiasm for sci-fi and BILLY JACK and other pop-cultural stuff. Unfortunately, as anyone sitting down to watch the movie probably already knows, she actually has nefarious plans for the kid, which come to a head one night after Cole’s parents (Ken Marino and Leslie Bibb) leave him in Bee’s care to head out on vacation. 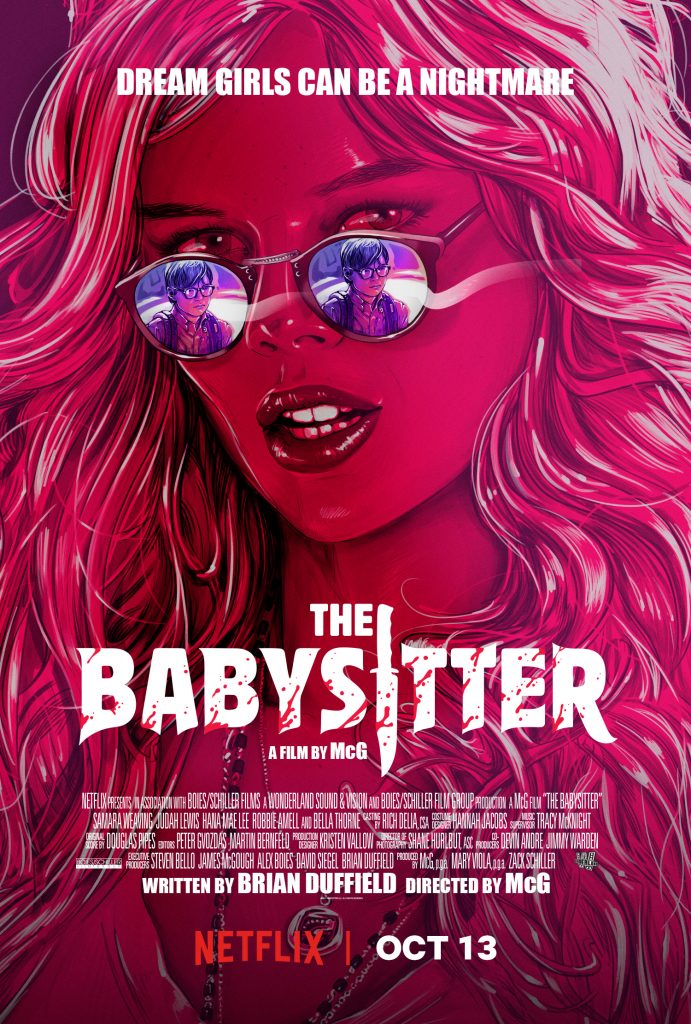 Cole, who’s curious about the sordid stuff Bee might get up to while he’s asleep (but has to Google “orgy”) spies on her after he’s supposed to have gone to bed, and discovers that she’s the leader of a group of young wannabe occultists. They need Cole’s blood for some vaguely defined ritual—but then, narrative purpose is secondary in a movie that’s mostly about quick-and-easy shock effects, from gushers of blood to constant, casual profanity. (The opening minutes make it clear that if you find the words “pussy” and “sphincter” intrinsically funny, this is the film for you.) THE BABYSITTER is the kind of flick that wants to have its long, lingering, slo-mo lesbian kiss and eat it too by pretending that the point is to mock the guys gawking at it.

It’s a shame, because the initial relationship established between Bee and Cole is actually kind of sweet. He doesn’t lust for her in unseemly ways, and a horror film about these two pooling their genre knowledge against an external threat could have been a knowing takeoff on fright-fare conventions. Instead, director McG and writer Brian Duffield go for the obvious and overstated every time, from tired musical cues (the “Mission: Impossible” theme as Cole sneaks out of his room, “We Are the Champions” during a heroic moment) to phrases like “WHAT THE FUCK?” and “HELL YEAH” splattered in big letters across the screen. Bee’s gang are a bunch of standard youth types, most egregiously John (Andrew Bachelor), the Hysterical Wisecracking Black Guy who makes ill-timed jokes about Black Lives Matter and AIDS. These dolts are so incompetent that they sometimes blunder into their own deaths, but any potential TUCKER & DALE VS. EVIL-esque laughs are not forthcoming.

Gore fans might get off on some of the bloodshed, but it lacks impact because it has no weight; two different people survive for a few minutes after having blades rammed through their skulls. Clearly, a sense of reality isn’t the desired effect, but THE BABYSITTER is implausible even on its own terms. Bee speaks of wanting Cole’s pure blood and yet drugs him on the fateful night, and apparently everyone else in the neighborhood is on vacation too, since no one apparently hears the gunshots and other action happening out in the yards and the street, save Cole’s gal pal Melanie (Emily Alyn Lind from LIGHTS OUT). Oh, and there’s a gratuitous moment in which Cole and Bee sample Netflix programming—though the irony is that if these apparently discerning kids happened upon THE BABYSITTER, they would likely switch to another selection before long.