To those concerned that the trailer for DON’T BREATHE 2 gives away all the best moments, let me reassure: It only gives away about half the best moments. But seriously, the sequel sufficiently recaptures the gritty, nasty style of its predecessor while adding some fresh wrinkles of its own, even as a few of them strain credibility in the home stretch.

Returning scripters Fede Alvarez and Rodo Sayagues (the latter taking over from the former as director) have essentially pushed the reset button here á la TERMINATOR 2. The original’s sightless villain, once again played by Stephen Lang, is now the hero; to quote Schwarzenegger in TRUE LIES, he still kills a bunch of people, but they’re all bad. (Advance publicity has referred to the character as “Norman Nordstrom,” but he’s still just “The Blind Man” in the movie itself.) After a quick prologue unrelated to the first film’s events, the story jumps ahead eight years to find the Blind Man taking care of his daughter (Madelyn Grace), whom he rescued as a baby from a fire that claimed her mother’s life. He’s raising her the way only a former Navy SEAL scarred inside and out by war can: training her in survival skills and home-schooling her, keeping her sheltered from the outside world. 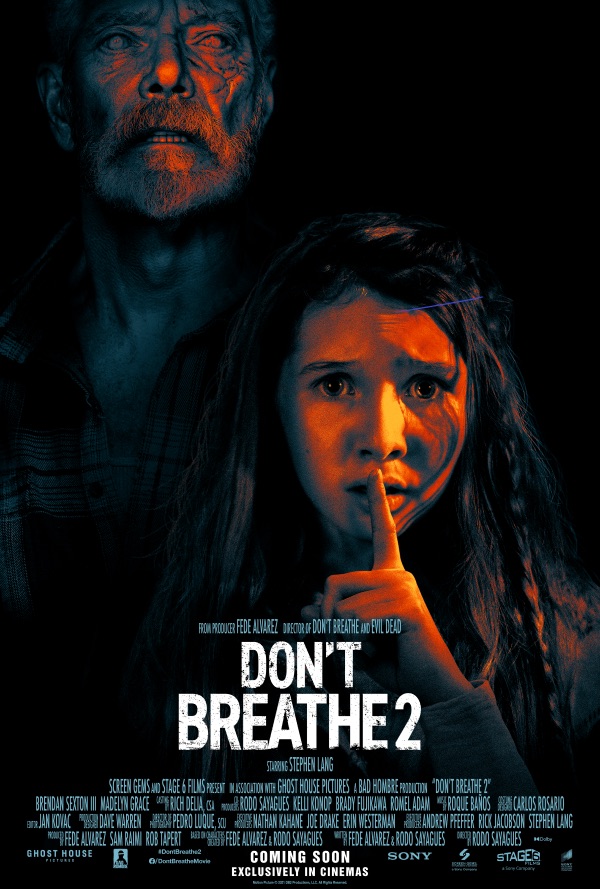 She’s been chafing at this lifestyle, anxious to experience a normal life and have friends, though it turns out there’s good reason to sequester her that way. The Detroit neighborhood they live in is crawling with creeps, and during a rare outing The Blind Man allows her, the girl encounters one named Raylan (Brendan Sexton III). He and a few of his vicious buddies follow her back to her place, and Sayagues pulls off a bravura long, fluid take following the home invaders as they play cat and mouse with father and child all over the house. There’s real tension here, with inventive, painful use of found items for both potent shocks and sick humor, plus the casting and makeup departments went all out to back Raylan up with the skeeviest-looking gang imaginable.

The film has also been shot by Pedro Luque and designed by David Warren for maximum gloomy, grotty impact (you quickly get the feeling why the girl doesn’t want to spend much more time in this house), and Roque Baños’ rich score fully backs up the horror and other emotional beats. The story takes a turn midway through that plays with our sympathies to a certain extent, though it’s always clear whose side the movie is on. It all wouldn’t work without the terrific performance by Grace, creating a young protagonist who’s tough and resolved and capable yet still just a kid, navigating a world populated by often dangerous adults. Lang once again plays The Blind Man with a combination of cunning and physicality that makes him a credible threat and, in this case, a credible protector too.

It’s not giving away too much to say that the movie eventually takes him away from his home and into unfamiliar territory where his sightlessness would seem a particular disadvantage. The way it gets him there is plausible while paying off on one of the narrative motifs, and also occasions one of the funnier bits of dialogue. His maneuvering around this strange environment isn’t always believable, however, and in fact the final act generally throws plausibility to the winds (with a few lines eliciting laughs that don’t seem to be intentional). At a certain point, you have to either just go with it or not, and the filmmaking is forceful enough to keep you engaged, wanting to see what twisted path the story will take and how The Blind Man and the girl will overcome each new threat.

Some fans might be disappointed that DON’T BREATHE 2 doesn’t venture into the truly perverse areas the original did, though given the age of its heroine, that’s certainly just as well. The filmmakers do an effective job of briefly teasing and misleading us as to what its bad guys are up to, and once they pay it off, they try maybe one time too many to one-up themselves. For the most part, though, DON’T BREATHE 2 successfully carries on the gruesome imagination and decrepit, unsettling mood that hooked audiences the first time around.

(See our interviews with Sayagues and Alvarez here and Lang here.)