Movie Review: Family drama with a side of arsenic in “WE HAVE ALWAYS LIVED IN THE CASTLE”

For those seeking to bring Shirley Jackson’s singular vision to life outside the printed page, the author’s 1962 novel WE HAVE ALWAYS LIVED IN THE CASTLE has proven a nut tougher to crack than Tessie Hutchinson’s skull in “The Lottery.”

Take, for example, the New York Times review of Hugh Wheeler’s 1966 Broadway adaptation, which reads in part, “…not even an occasional spooky soundtrack picking up the voices of the dead can curdle blood that hasn’t stirred yet.” A short-lived musical adaptation staged by the Yale Repertory Theater in 2010 fared little better; the Times in that case called it “about as spine-tingling as Broadway’s date with ‘The Addams Family,’ and about as much fun.” Ouch.

In their defense, it ain’t easy retrofitting the work of a bona fide world-summoning genius—all of which makes the gorgeous, unsettling, highly affecting feature-length take on Jackson’s final novel all the more impressive. Director Stacie Passon (AMERICAN GODS, THE PUNISHER) and screenwriter Mark Kruger (TV’s TEEN WOLF, CANDYMAN: FAREWELL TO THE FLESH) deftly balance the cloistered, otherworldly life of the ostracized remains of the Blackwood family and the all-too-real outside society that—whether driven by fear, malice or some combustible fusion of the two—seeks not only their isolation, but also their destruction. 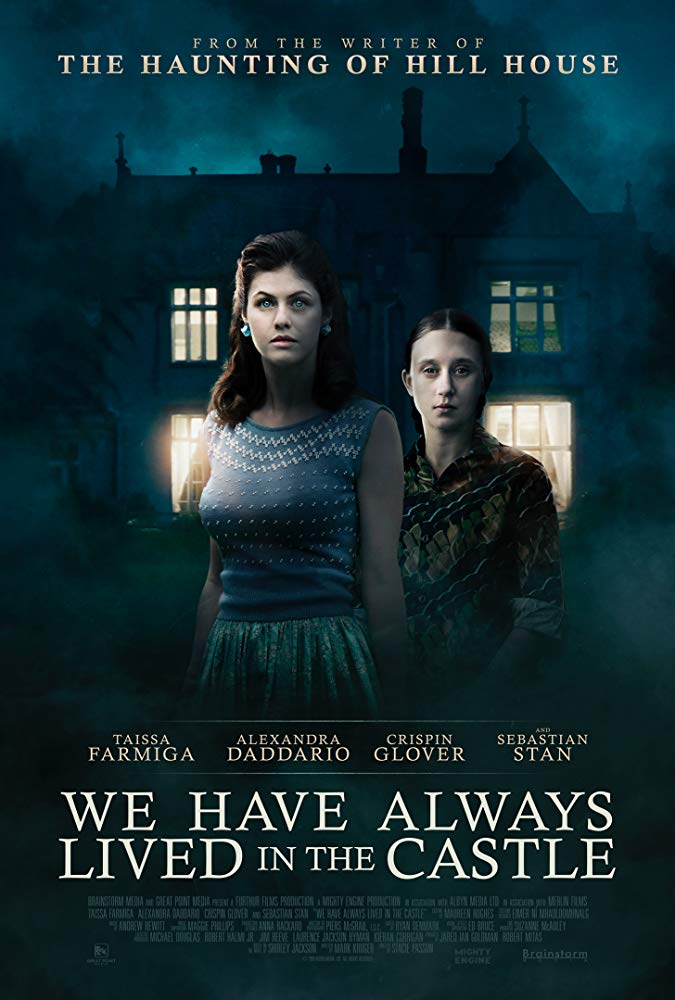 The film opens with a young, intense Merricat Blackwood (Taissa Farmiga of AMERICAN HORROR STORY and THE NUN; see interview here) sitting at a desk in the charred, wrecked husk of an ornate abode cryptically musing on the fate of her family: “The Blackwoods have always lived in this house. We have never done anything to hurt anyone. We put things back where they belong. And we will never leave here—no matter what they say. Or what they do to us. Never. But a change is coming. And nobody knows it. But me.”

And then we flash back—though not far, as the words “Last Tuesday” flash upon the screen. The circumstances are considerably more idyllic. The aforementioned house is intact. From the jump, the vibe is…not quite normal, yet the family—Merricat, her sister Constance (Alexandra Daddario) and Uncle Julian (Crispin Glover)—nonetheless appear to be settled in a comfortable-if-odd rhythm. Once Merricat heads into town for supplies, facing the headwinds of residents alternately wary and outright hostile, though, it quickly becomes clear that there is a sinister tinge—real or perceived—to the Blackwoods’ current iteration. Why? Well, we soon learn that the girls’ parents were poisoned with arsenic one night at dinner. Constance was charged with their murder but acquitted by a jury of her peers. The villagers, alas, have largely come to a different verdict and, despite her charm and beauty, are not willing to let a two-course serving of matricide/patricide slide.

Complicating this narrative is the weird, ritualistic behavior of Merricat, who buries silver coins and dolls, nails books to trees and smashes perfectly posh ceramic milk servers in a quest to keep Constance a) safe and b) to herself. Is it superstition? Or is Merricat aware of elements lurking in the shadows that mean them harm? Unreliable though the narrator may be, the answer leans heavily toward the latter.

Perhaps this state of affairs could have simply glided on for decades until, at last, the rest of the Blackwoods succumbed to more natural causes. As fate would have it, cousin Charles (Sebastian Stan) drives up in a fancy little car for an “unbidden” visit. He’s overly ingratiating and definitely working some sort of angle, but he begins to draw Constance’s attention from Merricat almost immediately. By halfway through dinner that night, there is a none-too-subtle spiritual battle for control of the “castle” as well as Constance between Charles and Merricat. It is a fight that will not remain an abstraction, and no one in the orbit of the surviving Blackwoods will ever be the same.

To go into any greater detail would be a disservice. Suffice it to say, aided by a cast delivering utterly convincing, transporting performances, Passon imbues WE HAVE ALWAYS LIVED IN THE CASTLE with the heart and nuance necessary to encourage us to care for and empathize with the Blackwoods, even as their hallucinatory existence and behavior carries more than a whiff of menace. She’s a triple threat, really, extraordinarily skilled at slow-burn suspense, heart-piercing pathos and cataclysmic apotheosis.

This is a powerful and strange film that honors the source material—no small feat—while showcasing the idiosyncratic vision and artistry of its interpreters. It’s hard to imagine an adaptation of this particular book being executed with more success or aplomb than this.