What makes indie horror feel so different from its big-studio cousins is its deep and unrelenting sincerity. Even when no comparisons can be made regarding production value, watching a film like PINK RABBIT feels like a breath of fresh air in an oppressively oversaturated genre. For Turkish writer/director, and star of PINK RABBIT, Zetkin Yıkılmış, what it means to make a horror film is to thread a narrative together with her own heartstrings. By dragging her personal anxieties and fears into the spotlight, Yıkılmış creates an absurd and surreal vision of a mother trying to make it home in time to tuck her son into bed.

The Berlin-based filmmaker’s love of horror, exploitation, and “old-school trash cinema,” as Yıkılmış describes it, is clear in PINK RABBIT’s every frame. The film opens with Martha (Yıkılmış) being held late at work by an uncompromising boss. After promising over the phone to make it home for her son’s bedtime, Martha’s night takes a turn for the strange and unusual when she is involved in a mysterious automobile accident on her way home. It is then that Martha encounters the titular Pink Rabbit (played by professional wrestler Roland Ionas Bialke), who uses magical forces to compel Martha through a series of bloody trials throughout space and time in order to make it home to her son. 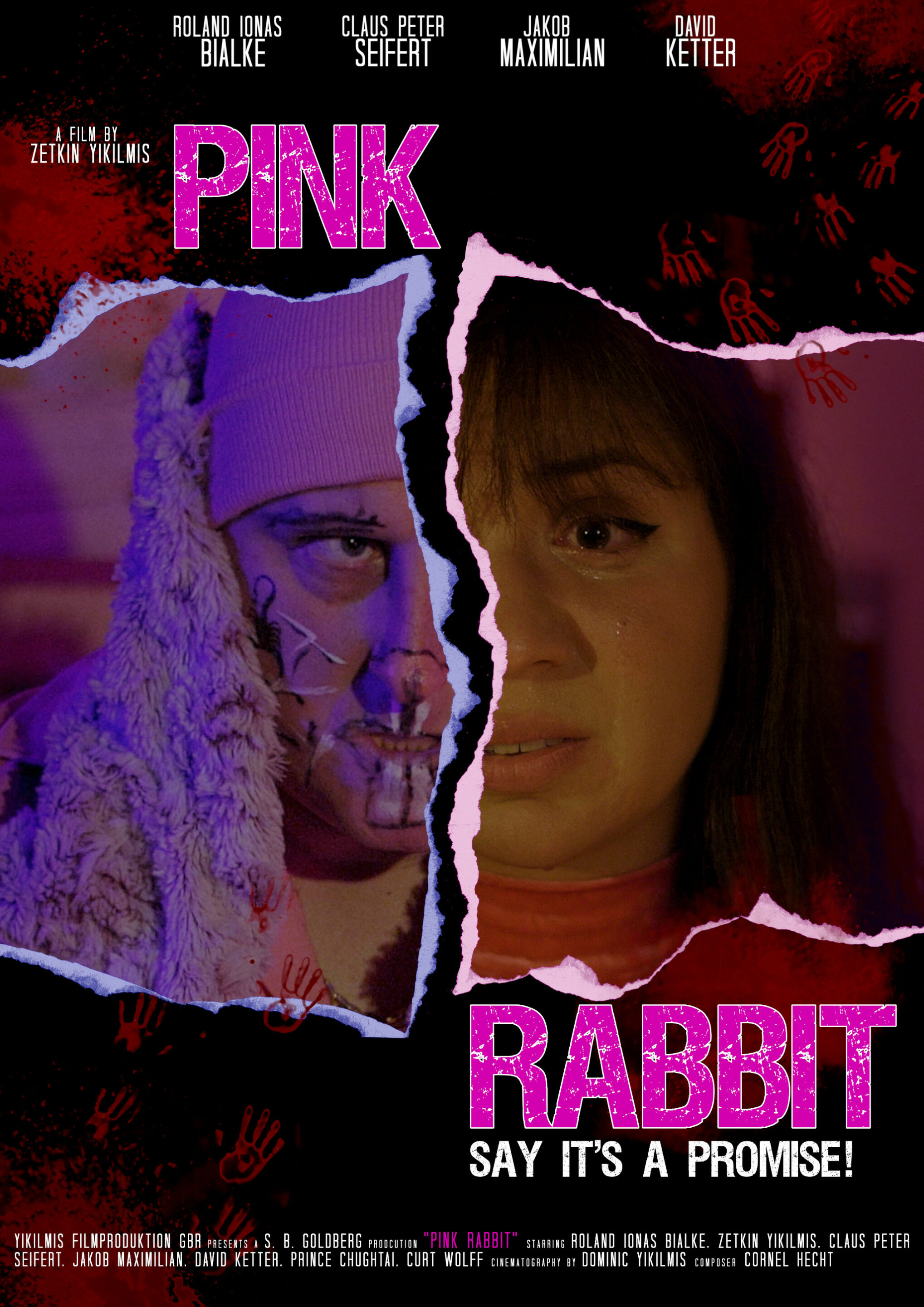 As Yıkılmış points out in her notes on the film, “Martha is not just competing against vicious rivals, but is also confronted with her inner fears and insecurities as a mother.” As she faces down confederate hillbillies, a sinister fortune teller, a talking cat, and others, Martha is forced to discover her own inner strength and determination. All the while, this surreal story plays out in a Lynchian cinematic environment where time stretches into slow motion and the characters are teleported through a series of increasingly unsettling settings. PINK RABBIT’s cinematography was fascinatingly devised by Yıkılmış’ husband and creative partner Dominic Yıkılmış.

The Pink Rabbit himself is an oafish and lewd trickster, who gives Martha a list of rules she must follow in order to win his deadly game, not the least of which is a warning to never speak his name aloud. The rabbit is a chaotic figure within the story, both a guide and an antagonist to Martha, not unlike Michael Keaton in Beetlejuice. His presence is the main source of PINK RABBIT’s nastiness, which is counterbalanced by the pure-hearted motherly love embodied in Martha.

Above all, PINK RABBIT is unflinchingly proud of being “unclean, imperfect and rough in delivery.” As Yıkılmış writes of her film, “many people are not used to this concept of imperfection, so I am sure Pink Rabbit (as a conceptual art film) is not for everyone – you have to let go of your expectations and habits and be open for a more experimental kind of experience. And still, you might hate this film, which is totally wonderful, because what would the world be without diversity (also in the taste of art)?”

PINK RABBIT is most impactful as a feminist horror film on account of these imperfections. More than that, it is an unmistakably intersectional feminist film – with dialogue and delivery that fights against the idea of English as “‘the world language’ imposed upon us,” as Yıkılmış puts it. With its high-concept ideas and experimental delivery, PINK RABBIT pays tribute to both arthouse cinema and trashy exploitation all in the same 105 minutes.

Check out PINK RABBIT (2022), available now on digital and Blu-Ray.