Before we begin, I want to get it out of the way that the title of TRIGGERED is going to put off huge chunks of our audience. It’s an insensitive, conservative, bullshit tactic to take a term traditionally used to describe what sufferers of PTSD experience and turn it into a joke-y, needlessly insulting title. I was put off watching a film with a title that clearly acts as a lightning rod for right-wing talking points, but I’m glad I soldiered through, since TRIGGERED ends up being a decent film, despite the best efforts of its shithead director. This is probably a testament to the writing prowess of newcomer, David D. Jones.

TRIGGERED capitalizes on the huge boom in both torture porn films like the Saw franchise and the Battle Royale genre, popularized by, uh, Battle Royale. A bunch of shitty teens, on their way to a music festival, wake up in the woods with suicide bomb vests strapped to themselves, which frankly saves them the hassle of actually attending the festival. They have varying amounts of time, based on how much the killer liked them, and when your time runs out, you blow up. If you die before the timer runs out, the person closest to your vest inherits the rest of your time. Whoever is the last person un-exploded gets to live. Uncomplicated, it’s a standard plot, and predictably, as the kids start mashing each other to pieces, they start revealing their petty high school dramas and secrets. 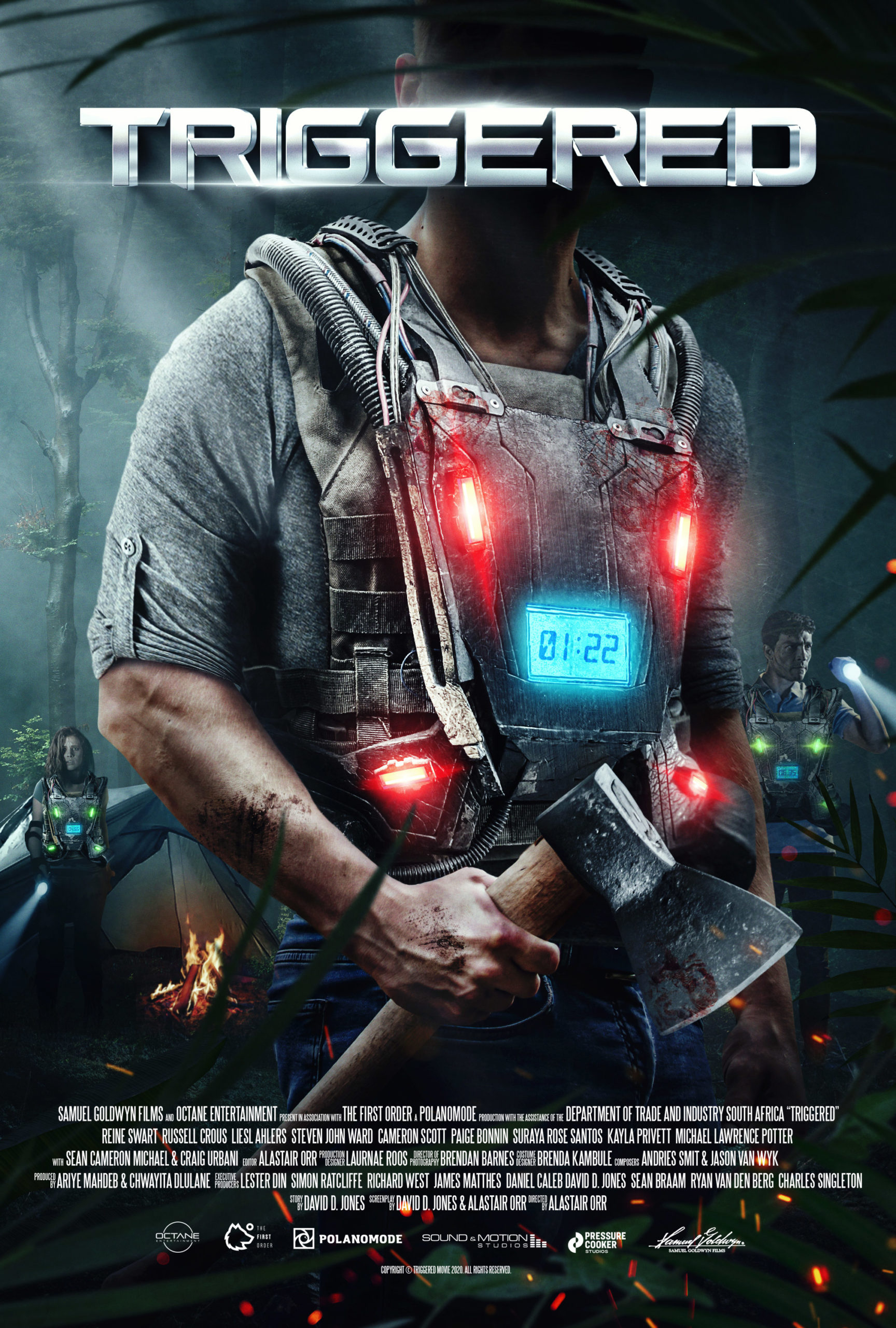 With a less skilled scriptwriter, this would be a series of clichés, but Jones puts some serious care into making the characters seem unlikeable yet interesting. Hep C gets passed through the group through a seriously tangled web of cheating and casual sex, which is darkly humorous. While Orr may have had the intention of taking overdone potshots at the youth of today, what actually ends up shining through is a frank look at the melodrama of youth and the thin line between society and savagery. All done through sex and gore jokes, which takes some skill.

By the director’s own admission, he “thought it would be hilarious to see sensitive, woke, SJW millennials being thrown into a grizzly [sic] death match, where they are more concerned about their own superficial feelings than the game that their tormentor wants to play.” Luckily, the director doesn’t have the skill to pull off that non-talking point (millennials aren’t teenagers anymore, bud) so while there are a few eye-rolling outdated references to “woke” trends, it ends up being a more balanced criticism of performative social actions than just a criticism of being socially aware.

The cast of characters falls almost exactly into Breakfast Club-style archetypes, but they just as quickly break those molds (via explosions) when the chips are down. It’s actually pretty funny watching the affable Jughead-esque character go full psychopath with absolutely zero prompting. He actually kind of lucked out with this whole bomb situation, as I feel the whole goofball character thing was holding him back from his true calling: murder.

The audio of the film is the strangest thing, and suffers from something not usually seen outside of the first Mad Max; everybody in the film seems to be dubbed, but everybody is reading their lines in English. As TRIGGERED was filmed in South Africa, the assumption is that the dubbing was done to cover up those dope accents and make the teens seem more American. It actually just ends up being distracting, as it has this auditory uncanny valley thing where you can’t really tell if the voices belong to the actors, so while you’re trying to figure out if that face actually goes with that voice, you end up missing the big reveal that the nerd character is a deranged sociopath.

TRIGGERED is a fun, no-nonsense, and no morals film that escapes from its own director’s clumsy grasp to deliver some seriously sweet mutilations. The characters are goofy, you won’t root for anyone, and that’s a good thing since not a lot of them live. Ignore the title, see the film, and follow the career of David D. Jones.

Samuel Goldwyn Films will release the thriller/action/horror film, TRIGGERED On Digital and On Demand November 6th, 2020.