As someone who attended film school, I’m no stranger to self indulgent artists who believe more in their vision than their moral responsibilities. These are the type that hear about Hitchcock torturing Tippi Hedren or Kubrick treating everyone like garbage, and assume that the only way to make art is to make people unhappy. This theme of abuse resulting in high art is the very foundation for the Indie psychological horror darling MYTH. 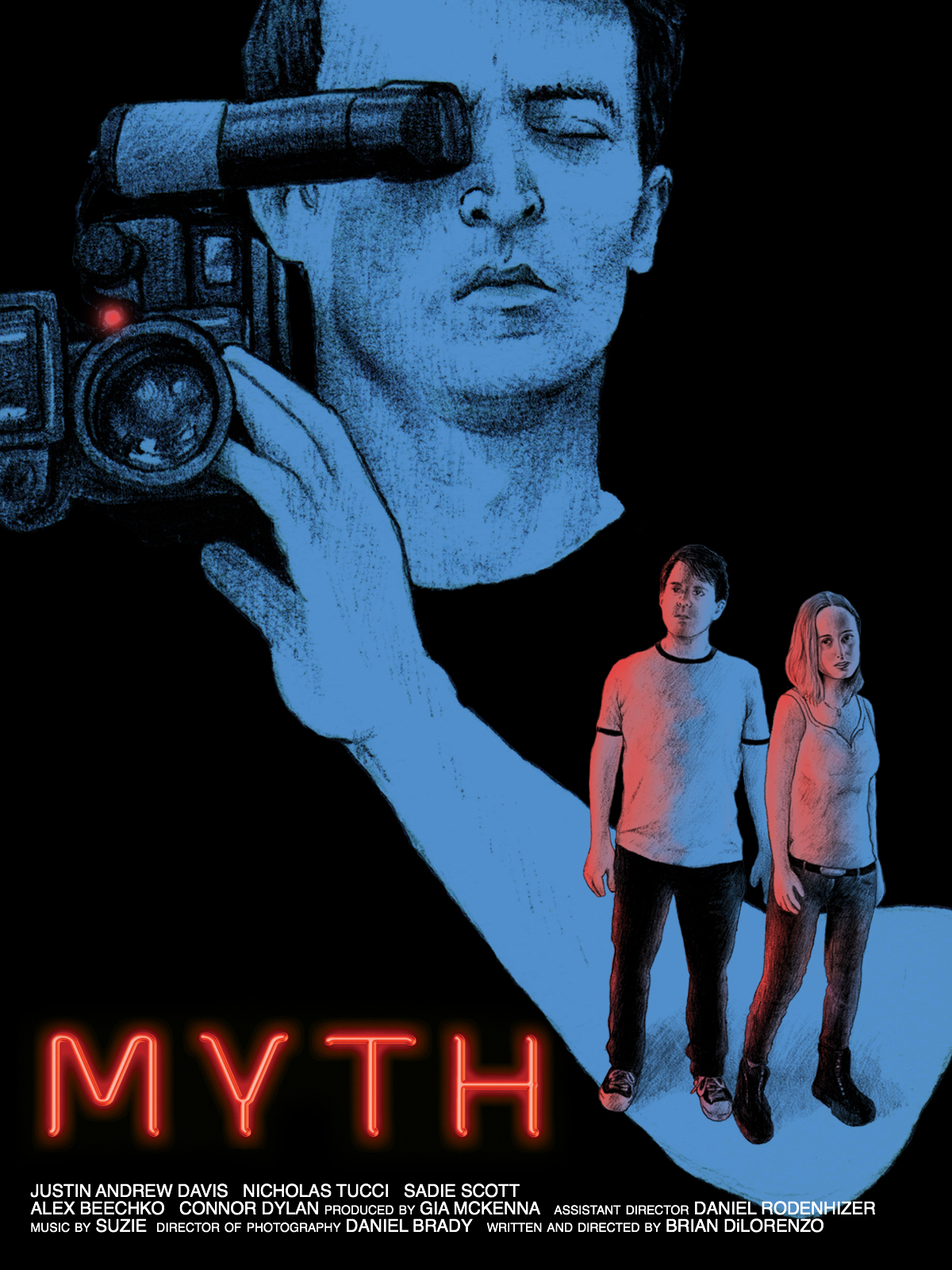 In Brian DiLorenzo’s directorial debut, we follow Alex (Justin Andrew Davis, You Look Great, She Came From The Woods), a teen who has trouble making friends and clicking into reality. This shines through when he captures his own loneliness and seclusion in the characters depicted in various scripts he is struggling to write. Separately, we are introduced to JP Smith, depicted with smug, aloof, creep-factor-eleven by the late Nicholas Tucci (You’re Next, Channel Zero) who sadly passed away just last year. JP is struggling to make a film, a project he has already secured funding for, but has no actual vision for, which is clearly weighing heavily on his mind as he is completely checked out during a raging party.

These two characters cross paths when Alex gets too drunk on parking lot moonshine while trying to impress a group of “rough” teenagers. While staggering home, JP picks up Alex, which already seems like a weird thing for a grown adult to do for a teen, but maybe this is only a yellow flag. When Alex wakes up in JP’s sweet cabin, he finds out that JP wrote and directed one of Alex’s favorite films, the titular MYTH. JP then forcible thrusts his mentorship on Alex, on the one provision that Alex never, under any circumstance, ask anything about MYTH. Alex is also forbidden from telling people about how famous JP is, or what their relationship actually is. OK, safe to say, that’s a big red flag on the field.

Emotions are toyed with, reality is warped, hearts are broken and most important of all, the film gets finished, but at what cost?

Almost immediately, JP manipulates Alex into being more awesome, prodding him towards barging into house parties, encouraging him to talk to his crush, supplying Alex drugs to impress people at the party. While doing all this. JP is filming everything that is unfolding in Alex’s life, guerrilla style. Soon Alex begins a whirlwind romance with his crush, Ruby (Sadie Scott, CRSHED, Rattlefly) and JP films all that too.

Pretty quickly, JP begins pushing the events of Alex’s life in directions he wants it to go, especially when a new heartthrob begins to take Ruby’s attention away from Alex, who is getting increasingly skeptical about JP’s motivations. This isn’t helped when it becomes more and more clear that JP is inserting scripted elements in what Alex assumed was his real life.

A series of twists begin to unfold that always keep the audience where JP keeps Alex: just one answer short of solving a mystery and never as clever as you think you are. Emotions are toyed with, reality is warped, hearts are broken and most important of all, the film gets finished, but at what cost? 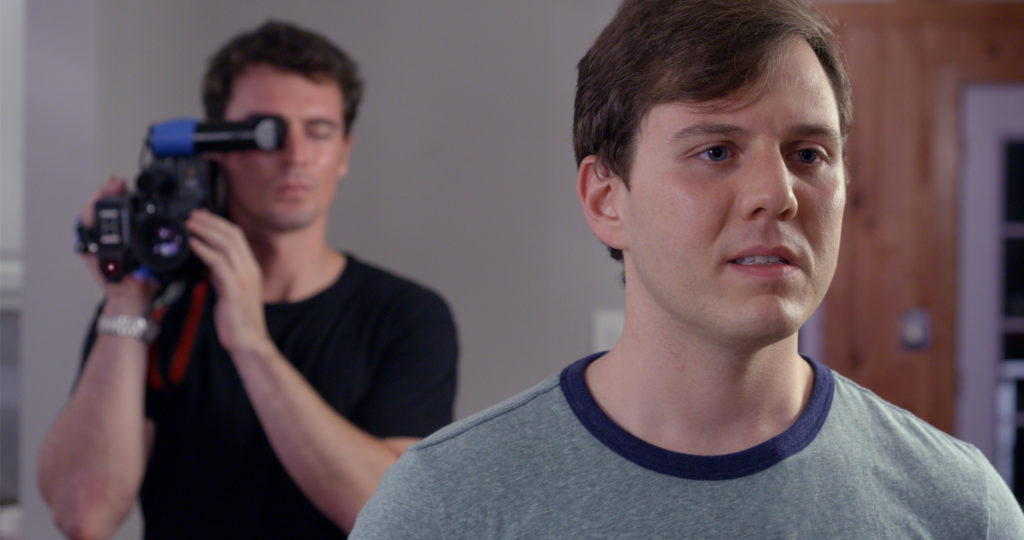 While I usually find it incestuous and a little self-congratulatory for artists to make stories about artists (seriously, how many Stephen King characters are writers) MYTH at least criticizes artists for their own delusions of grandeur. Directors who believe that a person’s trauma is worth less than a finished film, or an actor absolving themselves of being complicit by claiming they were just following a vision. MYTH, in my mind, asks whether all the masterpieces we’ve loved over the years, the ones that came from breaking people down and exploiting the desperate, whether they were really worth it. MYTH also doesn’t presume to give you a cut and dry answer, giving you an ambiguous ending, where the power is given back to people, whether they believe the art gives meaning to the pain, or vice versa.

Shot shakily and with a minimalist soundtrack by Suzie, the directing is fine for what it is, but anything too flowery would be dsitracting from the movie within the movie that is MYTH. The writing, on the other hand, is pretty top notch. Odd characters are weird as fuck, down to earth characters seem organic and interactions flow like film from a reel. 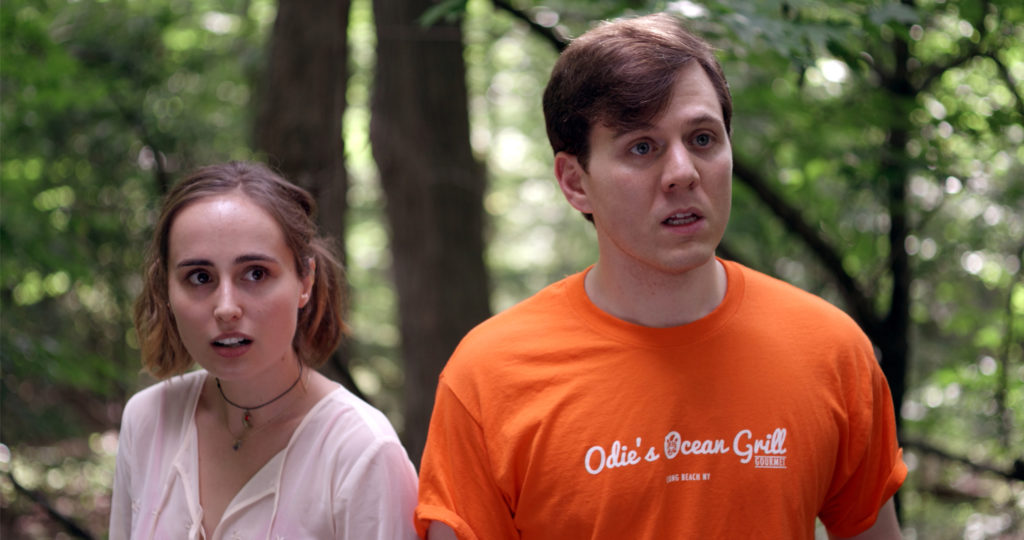 While Nicholas Tucci does deliver an interestingly detestable artsy-fartsy manipulator, both Sadie Scott and Justin Andrew Davis steal the show; Justin wearing raw loneliness and resentment on his face in such a readable way, he doesn’t need to say much and Sadie making Ruby such a perfectly lovable yet mysterious reserved character, you can’t help but empathise with anyone who has a crush on her.

MYTH is definitely an indie film, so don’t go expecting something polished with a ton of pizzazz. Instead, go for something bizarrely raw, surrealistically plausible and all too distressing.

MYTH is available to stream on Amazon Prime.