Movie Review: Make a resolution to watch Blumhouse/Hulu’s “IN THE DARK: NEW YEAR, NEW YOU”

When the Internet drama blew up over women directors at Blumhouse earlier this year, it was surprising nobody brought up the fact that Sophia Takal had NEW YEAR, NEW YOU in the works as part of the company’s monthly IN THE DARK movie series for Hulu. To be sure, it’s not a theatrical feature, though it could be one, bringing true substance to the genre and following up on the themes of toxic relationships that Takal explored in her much-praised 2016 psychological thriller ALWAYS SHINE.

The IN THE DARK movies are tied to holidays, and in NEW YEAR, NEW YOU (premiering today), the tie is stronger than usual. Alexis (Suki Waterhouse) is throwing a New Year’s Eve party at the opulent house her family is about to sell, and has invited just three longtime friends: Danielle (Carly Chaikin), Kayla (Kirby Howell-Baptiste) and Chloe (Melissa Bergland). Before the get-together begins, we get to know Danielle via on-line glimpses: She’s an Internet self-help guru hawking the Very Very Vegetables health drink and otherwise dispensing advice on how her viewers can better themselves. The contrast is immediate with Alexis, who has abandoned her dreams of becoming an actress, now works as a babysitter and bears scars on both her face and her psyche. 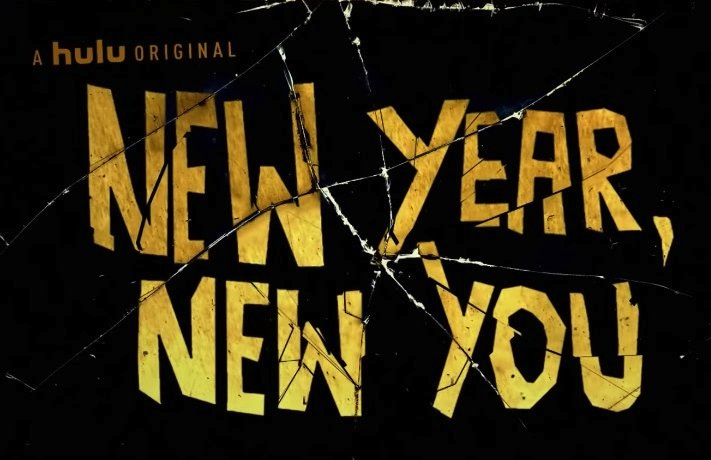 Takal, who also scripted (rewriting an earlier draft by Adam Gaines), drops early hints about something awful that happened in the quartet’s past, and explicates just enough of it during NEW YEAR, NEW YOU’s running time to make the present-day awfulness seem well-motivated. At first, the old friends are thrilled to be together again, though it doesn’t take long to see that Danielle’s healthier-than-thou attitude isn’t just an act for her followers. She’s the kind of person who can’t give a compliment without sounding like she’s congratulating herself for doing it, and when Alexis opens up to her, Danielle is condescendingly impressed with her honesty rather than sympathetic. When Danielle becomes too aggressive while insisting the other women each relate their New Year’s resolutions for her phone camera, the mounting tension snaps. Violence soon ensues, revealing that this party is not what it first seemed to be and that the women have even more secrets than we initially suspected.

Takal takes her time getting to the dark and nasty stuff, allowing us to get to know each of her heroines and understand their relationships before the old resentments begin rearing their ugly heads. As the horror builds and ultimately becomes more explicit, the filmmaker finds meaningful and clever ways to relate it to the themes of social media’s dominance of our modern lives, the urge for self-improvement and fresh starts and the New Year’s holiday that has come to represent those opportunities (at one point, someone is tied up with the strings on 2, 0, 1 and 9 number balloons). All four actresses do fine work and have palpable old-pal chemistry, with Chaikin the standout as the egotistical Danielle, who tries to psychoanalyze her way out of the worst situations and preys on the other women’s insecurities.

Danielle might be exactly the manipulative monster Alexis thinks she is, but Takal effectively plays with the notion of who the antagonist is here, and throws an unexpected turn into the story near the hour mark. NEW YEAR, NEW YOU loses some of its grip in the final stretch, though, as the psychological warfare gives way to standard terror-in-the-house shenanigans, with moments of implausible behavior. Nonetheless, there are nice touches of satirical humor spicing the mix up to and during the climactic action, and the movie leaves us with an amusing fadeout. After the many Christmas horror films employing and/or perverting familiar Yuletide icons, Takal’s achievement is that she’s crafted something relatably scary out of the personal emotions and tensions attendant to her particular holiday.