INSIDE, in fact, is an all-Spanish production shot in English, with some heavy hitters in the key creative positions. Jaume Balagueró, who first talked about directing this project nearly a decade ago, scripted with his [REC] 2 co-writer Manu Diéz and Miguel Ángel Vivas, the latter of whom wound up helming it as well. Vivas broke out with the gripping and ghastly home-invasion horror film KIDNAPPED, making him an apt choice to take a whack at French filmmakers Julien Maury and Alexandre Bustillo’s heart-pounding and gut-wrenching 2007 shocker about a ruthless woman terrorizing an expectant mother, determined to violently steal her unborn child. 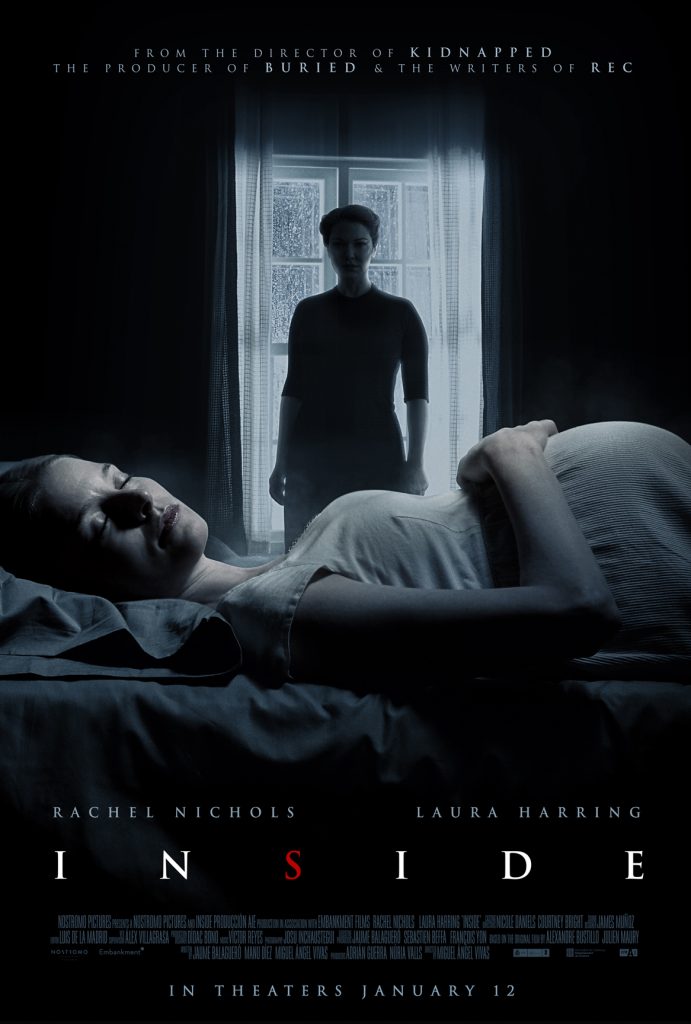 From the opening scenes, it’s clear that the filmmakers took this gig seriously, bringing to the film a dark, brooding style and an attention to character that were sorely missing in BLOODLINE (and a lot of other opportunistic reboots). What it ultimately lacks is a sense of why this material was revisited in the first place, other than to potentially introduce it to English-speaking audiences who don’t like subtitles. Until the final act, INSIDE doesn’t attempt to fix what ain’t broken, and while the scenario initially retains its unnerving punch, this iteration hews so close to the first for a while that it can’t dispel the aura of second-bestness, and the faithfulness eventually gives way to ill-advised changes to the storyline.

Set, like its predecessor, on Christmas Eve (likely the rainiest one the Chicago area has ever seen), the new INSIDE does work in a few new wrinkles. This time, the opening car accident that kills the husband of Sarah (Rachel Nichols) has left her requiring a hearing aid, and that along with her late-term pregnancy leave her at a particular physical disadvantage after a mysterious visitor (Laura Harring) turns up at her door late at night. At first attempting to talk her way into the house, the woman soon takes a more direct approach, making it clear she wants Sarah’s baby and sparking a cat-and-mouse game with life-or-death stakes for Sarah, and anyone unfortunate enough to turn up to check on her.

Nichols (once trapped in another one-on-one horrific situation in P2) brings solid sympathy to the terrified but resilient and occasionally resourceful Sarah, and while Harring (MULHOLLAND DR.) goes for an icy evil as opposed to the compelling, consuming madness of the previous film’s Beatrice Dalle, she certainly cuts a menacing figure. One of her victims has been reconceived in a manner allowing the filmmakers to add an extra cruel touch to his demise, while the cops who arrive prove to be pretty much as dumb and ineffective as they were the first time around.

Vivas wrings tension and a few shocking moments in INSIDE’s first hour, even if the blood doesn’t fly quite as copiously as it did under Maury and Bustillo. Eventually, though, the director and his co-writers begin to digress from their inspiration in ways that undercut both the claustrophobia and plausibility. There was no need to “open up” the action this way, or to trot out familiar expository imagery when the villainess’ goal and motivations are already abundantly clear. And the reconceived finale is likely to please neither fans of the original nor viewers new to this story. It’s a shame, because unlike many genre rebooters, this team’s hearts were clearly in the right place, but their INSIDE ends up stranded between honoring its source and attempting to transcend it.