Movie Review: No one escapes the gorefest in “THE BARGE PEOPLE”

Despite the carnage that unfolds in Charlie Steeds’ indie horror flick THE BARGE PEOPLE, traveling through the gorgeous canals of the British countryside by barge is certainly something I’ve added to my bucket list. I can only hope that I don’t encounter the cannibalistic fish-people that terrorize the protagonists of Steeds’ film, which stand somewhere between the Creature from the Black Lagoon and The Texas Chainsaw Massacre family. Given these influences, and as advertised in the trailer for THE BARGE PEOPLE, the film makes perfect sense as a follow up to Dark Temple Motion Pictures owner Charlie Steed’s 2017 picture, Escape from Cannibal Farm.

The expectedly predictable plot of THE BARGE PEOPLE unfolds when, ‘two sisters and their boyfriends head off for a relaxing weekend away on a barge, unaware of the flesh-eating fish mutants lurking in the water, ready and waiting to feed.’ And feed they do. The practical gore effects are certainly the movie’s high point, and create more than a couple stomach-turning moments of characters being chomped on as they scream in terror. Even when some of the blows and bites don’t visibly land, there is plenty of blood to go around.

“THE BARGE PEOPLE” provides a delightfully gory romp through the English countryside, complete with a retro creature-feature twist.

The start of THE BARGE PEOPLE introduces the audience to sisters Kat and Sophie (Kate Davies-Speak, Natalie Martins), and their polar opposite boyfriends: the outdoorsy Mark (Mark McKirdy) and the preppy businessman Ben (Matt Swales). As the two couples settle into their weekend barge, the film leans heavily into its rural British charm, and rural British horror for that matter, and presents campy social commentary on class and the consequences of toxic waste pollution alike. Dread builds as the group encounters unfriendly river-barge dwellers, a surly country barkeep, and eventually, the fish-people with a taste for human flesh. 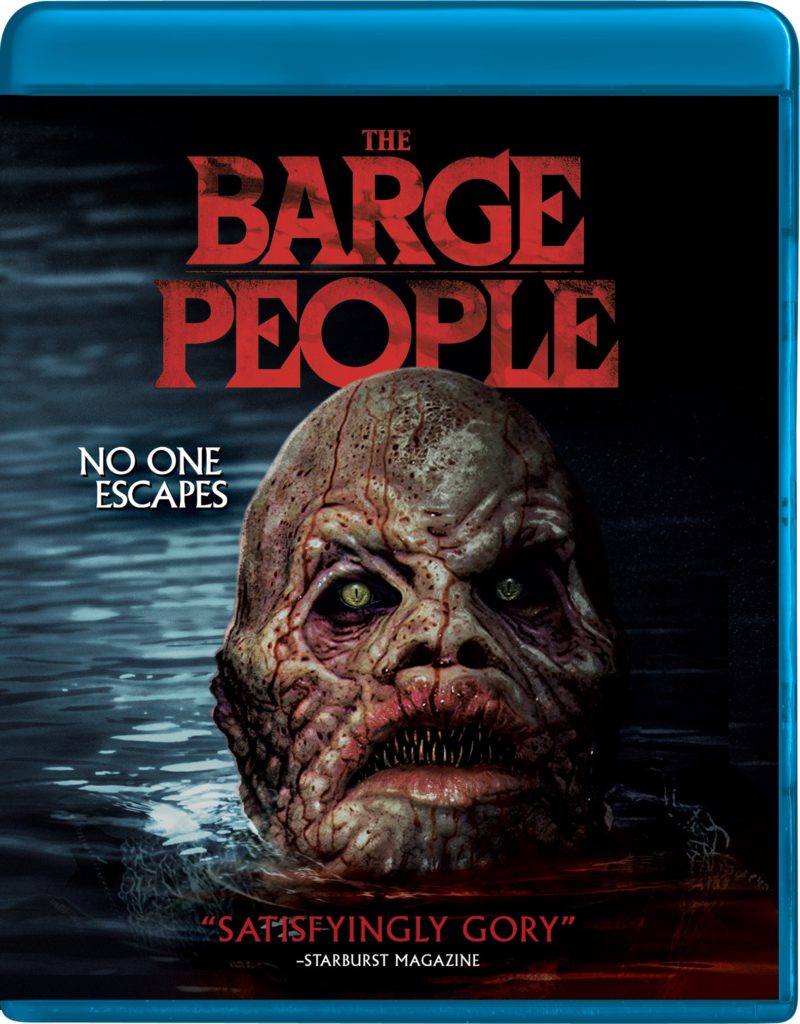 While I am still unclear on whether the titular “Barge People” actually refers to the protagonists or the monsters, the film delivers a cinematic experience that can be equally frightening and laughable in the same moment. However, THE BARGE PEOPLE would likely have benefited from slightly less humanoid monsters, who unfortunately have spoken lines and don’t in fact swim in the murky canals (as pictured on the cover), but instead lumber around in human clothing. Yet despite these apparent flaws, THE BARGE PEOPLE somehow manages to surpass its shortcomings and is genuinely a good time to watch.

THE BARGE PEOPLE provides a delightfully gory romp through the English countryside, complete with a retro creature-feature twist. As Halloween season approaches, and many of us gear up for some serious horror bingeing, I would certainly recommend adding THE BARGE PEOPLE to your list. Initially released in the UK in 2018, the film became available to stream in North America on August 18th of this year. THE BARGE PEOPLE is accessible on all digital on-demand channels and can also be purchased on Blu-Ray and DVD.