As the main title wipes across the screen at the beginning of OVERLORD, you get the happy feeling that you’re about to see the kind of movie the major studios don’t make anymore. This kind of pulpy horror/war drama is typically the domain of independent, direct-to-video fare like the OUTPOST series, and OVERLORD brings plenty of energy and technical savvy to the table, even if it doesn’t offer much in the way of fresh ingredients.

Its best sequence occurs right after that opening title, taking us into a WWII plane carrying a motley bunch of American soldiers over Nazi-occupied France. Their mission is to parachute into a rural area and take out an enemy radio transmitter set up on a small town’s church, to help clear the way for the impending D-Day assault. Just as they’re preparing to line up for the drop, they’re hit by anti-aircraft fire that rips through the fuselage, killing some and sending our central character, Private Boyce (Jovan Adepo), tumbling out the door and into a night sky lit up by searchlights and explosions, deploying his chute just in time. It’s a harrowing, vertiginous sequence that, like the rest of the movie’s action, is staged for maximum intensity while retaining visual clarity by director Julius Avery. 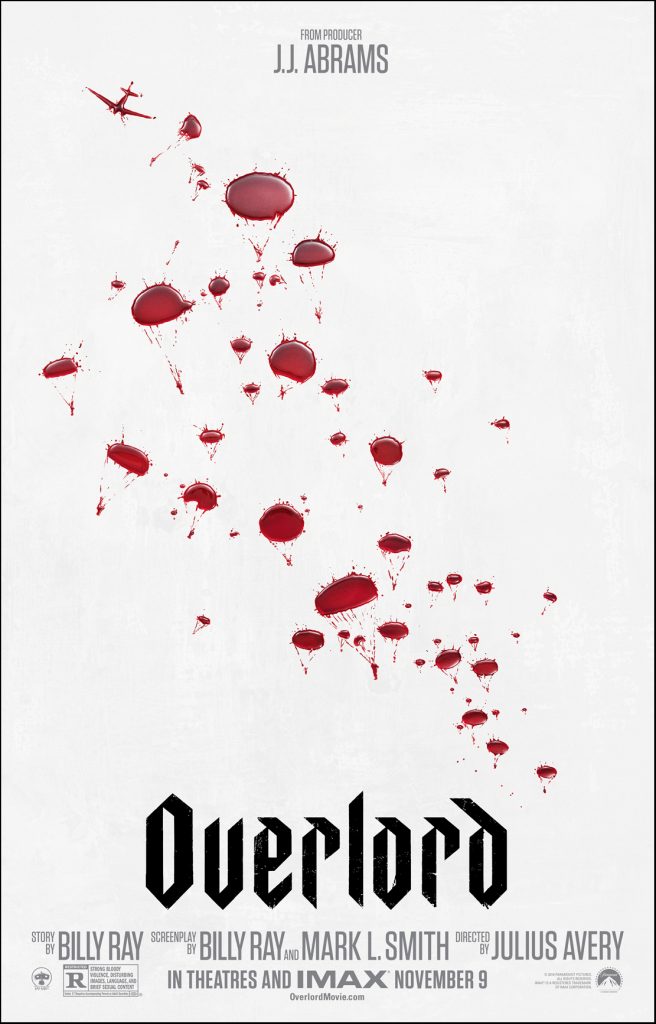 Once on the ground, Boyce joins a handful of fellow survivors, including bad-ass, all-business Corporal Ford (Wyatt Russell) and wisecracking Tibbet (John Magaro), and they make their way to that village, where they’re given shelter in the home of beautiful freedom fighter Chloe (Mathilde Ollivier). She joins the soldiers in plotting to take out the Germans, who have killed her parents—and done something horrible to her aunt, who is confined to an upstairs bedroom, where she makes horrible wheezing sounds and gives the frightened Boyce a brief look at her gnarled face. (She’s played by an actress named Meg Foster—apparently not the one from THEY LIVE, LEVIATHAN etc.)

As the audience will likely suspect even if they haven’t seen the trailers, the SS is conducting dreadful experiments on human subjects in the expansive bowels of that church, which severely complicates our heroes’ quest to blow up the transmitter in its steeple. Billy Ray and Mark L. Smith’s script is not lacking for incident that keeps the movie humming along through its close-to-two-hour running time: Confrontations between the soldiers and the Nazis, led by the coldly sadistic Wafner (Pilou Asbæk), alternate with attacks by formerly dead people revived and mutated by a serum that turns them insanely violent and extremely difficult to kill. Yep, it’s the old scientifically-created-supersoldiers trope, and if you’re a seasoned genre fan, you might find yourself watching OVERLORD waiting for a twist on the formula that doesn’t arrive. It lacks the freakish invention of a film like RE-ANIMATOR or, sticking closer to the specific milieu, the more recent FRANKENSTEIN’S ARMY, and the excitement generated by Avery’s filmmaking isn’t matched by an accompanying thrill of surprise. I also wish more had been done with Dr. Schmidt (Erich Redman), the briefly seen scientist in charge of the evil experimentation.

Still, there’s plenty of gruesome fun to be had with OVERLORD, not least of which is seeing big-ticket production values brought to this kind of down-and-dirty material. Cinematographers Fabian Wagner and Laurie Rose, the latter a frequent collaborator with Ben Wheatley, ally with Avery to give the movie a richly eerie look throughout—though again, the most evocative images are in the early, pre-laboratory scenes. The thunderous score by Jed Kurzel (THE BABADOOK) certainly keeps your attention too; this writer saw OVERLORD at a top-volume IMAX screening, though I’m told the sound is also cranked up to 11 at regular showings.

It’s well-made enough that you can just sit back, or on the edge of your seat, and enjoy a meat-and-potatoes horror-actioner that dispenses with any questions about who the good and bad guys are. Especially given recent events, Nazis may be the last group everyone can enjoy cheering against, and OVERLORD takes full advantage of the opportunity to paint its conflict in viscerally black-and-white terms. (Speaking of which, it’s pleasing to see the progressive approach to casting with Adepo and Bokeem Woodbine as his briefly seen sergeant among an otherwise white squadron, even though African-Americans were actually in segregated units in WWII.) There are moments when Boyce, a pacifist by nature, becomes appalled by the lengths to which Ford will go to extract information from Wafner, and all three performances are strong enough to give them true tension. In the end, though, the main joys of OVERLORD lie in seeing nefarious villains and deformed ghouls get blown up (or blown away, or burned) real good.