Rich people are evil. That’s been a dependable notion on which to hang a horror film since long before concerns about the 1% came to the fore, though no doubt that dialogue has helped spur the current spate of flicks about heroines (or a couple) trapped and terrorized in well-appointed houses, as opposed to seedy, rundown dwellings. Just this month and next, variations on the theme can be seen in TONE-DEAF, SATANIC PANIC, VILLAINS and READY OR NOT, the most conspicuously class-oriented of the bunch and a wickedly entertaining mix of human-hunt thrills, bloody splatstick and socially conscious satire.

Grace (Samara Weaving) thinks she’s found the perfect guy in Alex (Mark O’Brien), with whom she’s about to get married after 18 months of sexually active bliss. You’d think the fact that Alex hails from an extremely wealthy family would be the icing on the cake, but as they prepare for their nuptials at the Le Domas mansion, there are all kinds of hints—to her and to us—that maybe she should be having second thoughts. “She’ll never be one of us,” an impending in-law says to another, who replies, “Of course not, she has a soul.” Patriarch Tony (Canadian vet Henry Czerny) clearly doesn’t like Grace, Alex’s brother Daniel (Adam Brody) offers her a chance to opt out, and then there’s creepy old Aunt Helene (Nicky Guadagni of SILENT HILL and CUBE), lurking disapprovingly on the sidelines. With her imperious manner and acid tongue, she’s the type of woman some would call an old battle-axe—and appropriately enough, she wields one too. 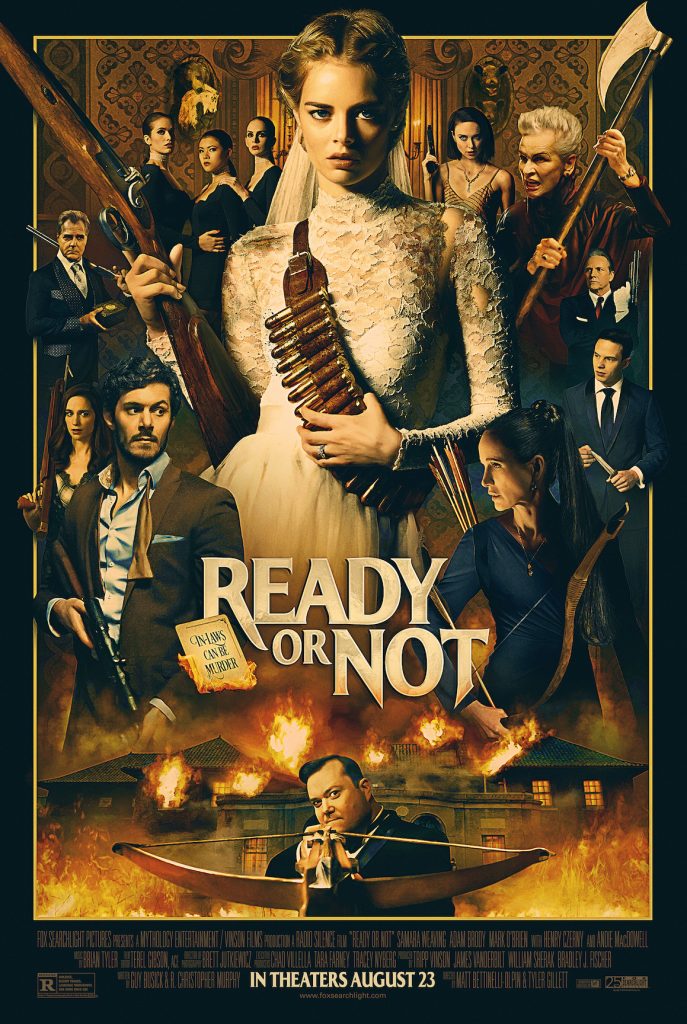 Aunt Helene and her brood pick up their old-fashioned weapons when a post-wedding Le Domas tradition is revealed: Newcomers to the fold must play a game, chosen via a mysterious box tied to a deal for great fortune made by a Le Domas ancestor (named Victor, natch). Grace might potentially be in for a chess match, but instead she draws “Hide and Seek,” which in this house is played for keeps. Soon she’s fleeing through the labyrinthine mansion in her wedding dress, struggling to stay alive in a gruesome travesty/parody of family values and the mores of the very rich.

The trick that makes the script by Guy Busick and R. Christopher Murphy (who have worked on CASTLE ROCK and STAN AGAINST EVIL) click is that it’s not just the sum of its delicious setup and subsequent bloody encounters. The Le Domases are all sharply drawn, and the movie is as much concerned with their black-comedic interplay as with Grace’s attempts to evade and turn the tables on them. We learn that this is the first time in decades that they’ve played this particular variation on hide and seek, though that also becomes obvious via their sometimes comically inept stabs and shots at playing it. These are bad news for their domestic staff, who look like the backup girls in old Robert Palmer videos and, in READY OR NOT’s sickest running gag, fare about as well as the cute little dogs in A FISH CALLED WANDA.

The actors portraying the Le Domases, also including Andie MacDowell (slipping nicely into malevolent-motherhood), Melanie Scrofano, Kristian Bruun and Elyse Levesque, are all—ahem—dead-on, and the movie is carried with utmost confidence by Weaving. As in Joe Lynch’s MAYHEM, which gave her a somewhat similar role, she’s brimming with ready-for-anything attitude, and is also allowed sufficient moments to demonstrate Grace’s affection for Alex and disbelieving despair when her trust in him is violated. Weaving navigates Grace’s survival arc expertly, even over the occasional moments when the movie lets the character down: More than once, Grace fails to pick up a fallen gun she could use to defend herself (though in one case, she uses a more symbolically loaded weapon instead).

On the whole, though, READY OR NOT plays fair and logically in thwarting Grace’s escape attempts while dragging her into ever more horrific setpieces. Directors Matt Bettinelli-Olpin and Tyler Gillett of Radio Silence, who cut their teeth in the anthology short form with V/H/S and SOUTHBOUND, and found footage in DEVIL’S DUE, take to this more composed feature project with precise camerawork and meaningful shot details, ratcheting up the tension and frequently relieving it via the well-timed dark humor. With cinematographer Brett Jutkiewicz bathing the proceedings in an amber candlelit glow before the walls and the people within them get splattered with red, READY OR NOT has a lot of fun literally skewering the upper class.