Movie Review: Romance ain’t dead but has a large body count in “TRESPASSERS”

Think the lovers’ quarrels you have with your significant other are difficult to navigate? Try turning down the boil on your bickering when you’ve Airbnb’d yourself at a secluded estate out in the middle of the no-cell-signal desert, there’s another couple egging you on, bloodthirsty murderers are tapping on those elegant floor-to-ceiling glass doors with rusty machetes and a mysterious stranger who eerily resembles the legend her-goddamn-self Fairuza Balk (THE CRAFT) brings her trademark mix of intensity, sweetness and menace to her lingering visit.

If you’re not ready for that sort of viscera-festooned gauntlet, be glad you aren’t a character in director Orson Oblowitz’s wild, seductive, nasty psychological thriller TRESPASSERS, which hits select theaters and VOD today. Trust us—by the time the hellish, gore-drenched denouement arrives, the trifling matter of being exiled to the couch for a night seems like heaven by comparison. 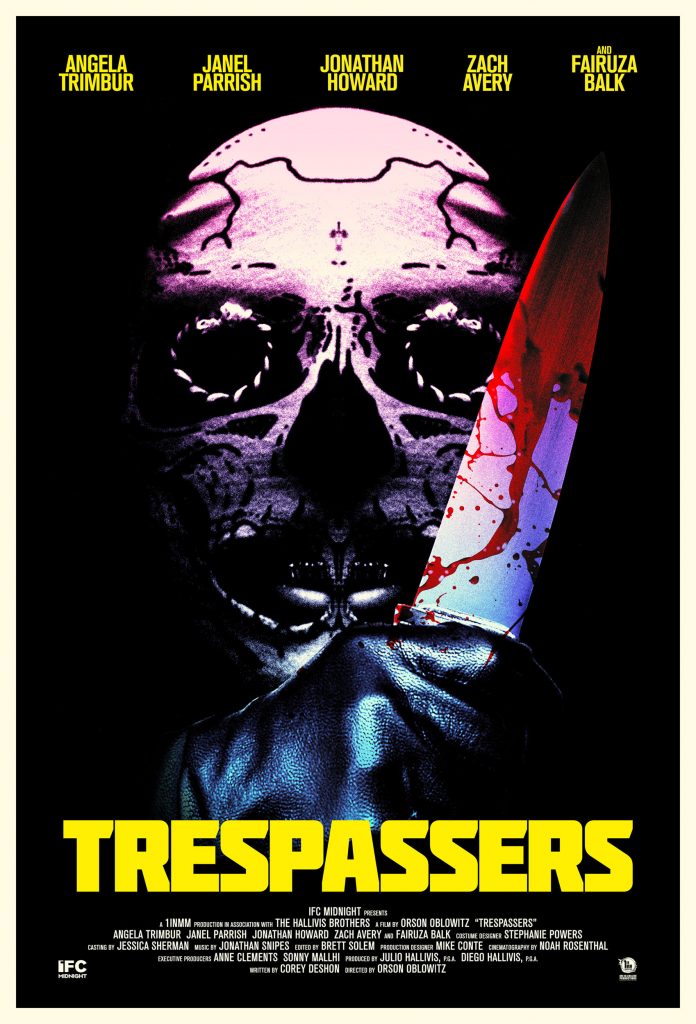 Here’s the setup: Sarah (TRASH FIRE’s Angela Trimbur) and Joseph (Zach Avery) are a married couple on shaky ground who’ve decided to get away from their stifling, poisoned usual environs to see if perhaps they can get that spark back while repairing their love foundation. Joseph wanted to do this solo, but Sarah thought tossing her party-girl college bestie Estelle (Janel Parrish from PRETTY LITTLE LIARS) and Estelle’s cocaine- and testosterone-addled horndog asshole boyfriend Victor (Jonathan Howard) into the mix would be a good idea. It seems at first as if the party might turn out to be a counterintuitive victory. The alcohol flows freely. The hot tub is christened in the traditional manner of extremely attractive couples throughout cinema history. Alas, there’s some unexpected interpersonal intrigue we shan’t spoil here, and faster than you can say in vino veritas, things begin to fray.

Into this walks Balk’s aforementioned, unnamed strange stranger. She says her car broke down and she needs a landline to call her babysitter. Couldn’t she just come in for a moment? Then a minute turns into 10. Which turns into 20. Which turns into a weirdly sinister lecture on why divorce is sometimes the answer. (“Sometimes you just can’t stop what’s coming,” she says in a tone that gives us a sneaking suspicion she may not have arrived as randomly as advertised.) Which turns into…wait, are we in danger?

Yes, friends. Yes, you are.

It’s difficult to describe anything that transpires from this point without destroying some of the magic and surprise. Suffice it to say, by the time the murderers show up, bodies have already dropped, secrets have been spilled and your heart is going to feel like a sadistic cardiologist just put you through a stress test. Corey Deshon’s script is full of beautifully conceived and executed twists that are shocking yet uncomfortably within the realm of possibility. Oblowitz proves equally adept at summoning forth both romantic drama and primal violence. The cast is topnotch, imbuing their affecting, believable performances with nuance and depth, whether in the role of terrorized or terrorizer, seducer or seducee, betrayer or betrayed. The tables turn more frequently here than at an interior design firm, and the actors will draw you in…until their very last breaths.

At its best moments, TRESPASSERS feels a bit like Dario Argento and Adrian Lyne got together to direct a home-invasion flick. If that doesn’t seal the deal for you, the film—like some of the relationships and lives it chronicles—simply wasn’t meant to be.