MOVIE REVIEW: “TALES FROM THE CAMPFIRE” WORTH GATHERING AROUND

Pulling off a good campfire is harder than it looks – it can be expensive, inconvenient, and even when you’re out there, there’s no guarantee your friends’ horror stories will be any good. So, be very thankful for Tim Bell, the New Brunswick filmmaker who’s done all the work for you with his new anthology horror movie TALES FROM THE CAMPFIRE.

The set-up is exactly what you’d expect: four friends (Morgan Kavanagh, Anika Ouellette, Brad Butland and Cody Bolton) take turns trying to one-up each other as they tell stories around a campfire. Eventually, three very different stories emerge, each with a tantalizing hook: A woman returns to a house where her parents each met their mysterious demise years ago, two thrill-seekers wandering through a cemetery realize that they are being watched, and a group of campers find another cemetery that has seemingly appeared out of thin air. If you think you’ve heard these before, you’re not alone – one of the funnest elements of Bell’s film (which he also wrote) is how its characters seem as aware of the action as we are, questioning and debating the plausibility of each story as they unfold. 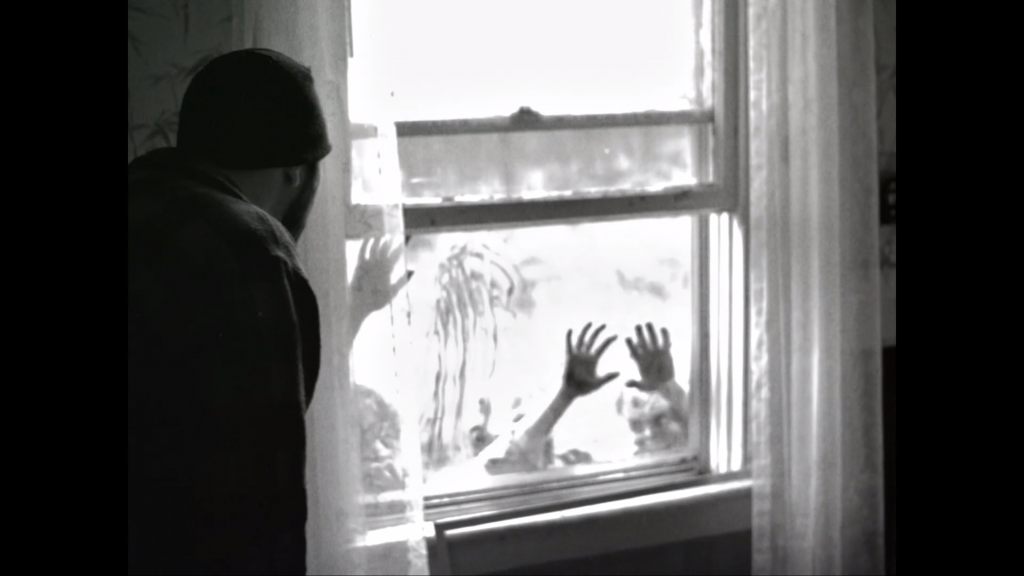 TALES FROM THE CAMPFIRE’s creativity and playfulness with the tropes of horror and anthology movies extends beyond the dialogue – In one of the more inspired choices made by Bell and his team, the style of the film itself switches to accommodate each story, ranging from a grainy, Romero-evoking academy ratio to a glitchy, twitchy VHS segment. But there’s more happening here than just gimmickry. Much of the movie’s appeal emerges as the boundaries containing the stories prove porous –  not to give too much away, the stories run amuck, blending into each other and bursting out of the realm of fiction in legitimately surprising ways.

The low-budget resourcefulness of Bell’s team helps to make the movie’s familiar milieu of haunted houses and creepy cemeteries seem fresh. For example, when we get our first glimpse of a zombie, we don’t see the blood oozing out of its face, but rather how it drips onto the creature’s dirty sock. Much of the movie’s creative creepiness is enabled by its stunning cinematography, from Michael Tatlock and Bell himself. With the help of lighting director Ulrich Saukel, Tatlock and Bell use the limited resources available to them to mesmerizing effect, putting many massively-budgeted films to shame. Keep an eye out for a scene in the first tale, where our protagonist (Kavanagh, again) descends into the rickety basement of her dead parents’ house, only to find herself stranded in a sea of blue mist and negative space.

The sheer amount of similarly memorable images that TALES FROM THE CAMPFIRE provides would be impressive for any movie, let alone one which attempts (and ultimately succeeds) to tell three very different stories in its slim 70-minute runtime. It proves once again that talent and originality outweigh money when it comes to providing audiences a memorable moviegoing experience.

To go on would risk spoiling all of the movie’s best moments, so it might just be best to see it for yourself, if you can (Just one more: an ominous character known as The Raven, a hulking, almost insectoid figure in a bird mask). Like the best indie movies, it is infused with such obvious passion and enthusiasm that it leaves viewers wanting to do nothing more than to grab their friends and make their own horror story – or, at the very least, hold their own campfire. The stories are out there, lurking in the woods, just waiting for the right team to tell them.

Patrick Woodstock
Patrick is an MA student at Concordia University, with a love for writing about and researching anything horror-related.