Movie Review: The quiet but powerful fear of being “HERE ALONE”

In a screen scene filled with indie zombie movies that seem determined only to push the gore factor amidst derivative scenarios, it’s encouraging that a subtler, more personal approach like that taken by HERE ALONE (in select theaters today) could earn the Audience Award at last year’s Tribeca Film Festival. Like Jeremy Gardner’s THE BATTERY, but with a considerably different tone, the film makes a virtue out of focusing on the people trying to survive a viral apocalypse rather than on those who have been transformed by it.

In fact, the bloodthirsty infected are barely seen for a while, existing largely as a threat lurking out in the upstate-New York woods in which Ann (Lucy Walters) has set up a makeshift, solitary existence. With a tent and disguised car as her base camp, she forages for food from abandoned houses in the surrounding area, while flashbacks reveal how her husband Jason (Shane West) taught her how to survive. Working from David Ebeltoft’s spare, tight screenplay, first-time feature director Rod Blackhurst ekes a considerable amount of quiet, dramatic tension out of Ann’s simple day-to-day existence, in which her life literally depends on staying as unseen as possible. 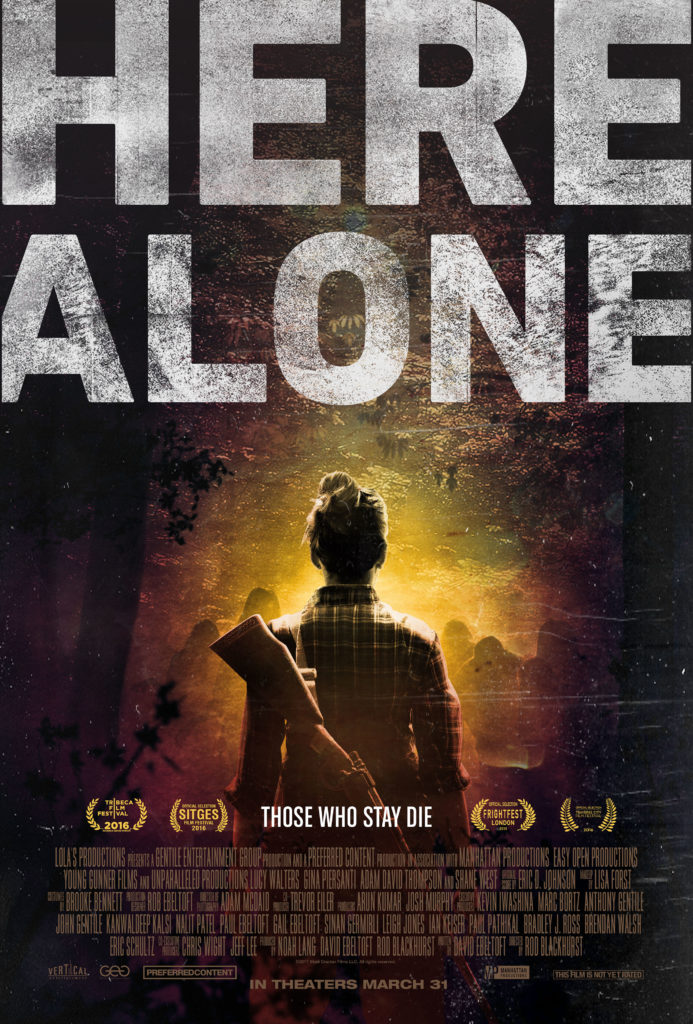 Companionship and potential hope for the future arrive in the persons of the injured Chris (Adam David Thompson) and his teenage stepdaughter Olivia (Gina Piersanti). While Ann helps nurse Chris back to health, the possibility of moving on to something better is raised (as in the similarly themed STAKE LAND, Canada appears to be a last bastion of civilization). But more than the infected, human emotions and desperation become the enemy, with a few unpredictable turns in the movie’s second half.

There are some more explicit sights in this portion as well (thanks to fine, unshowy makeup effects by Lisa Forst), which serve to punctuate a story whose suspense is driven by behavior. Even in the most taxing, life-or-death situations, HERE ALONE says, people can make dangerous decisions due to the wrong personal motivations—and that holds a lot more interest than another series of cannibalistic mutilations and disembowelings. With strong acting and craftsmanship from top to bottom (Adam McDaid’s naturalistic cinematography is particularly praiseworthy), HERE ALONE will reward anyone looking for a more quietly unsettling brand of horror.