Movie Review: The reboot makes more than one “WRONG TURN”

It’s a rather sobering thought that Rob Schmidt’s WRONG TURN is now almost a generation old, since it first came out in 2003 as one of the first 21st-century films to revive the ’70s survival-horror aesthetic. There have been countless subsequent movies like it, including the franchise it spawned, which began with Joe Lynch’s just-as-good WRONG TURN 2 and then quickly and steeply descended into direct-to-video torture schlock. It’s therefore not surprising that returning original screenwriter Alan McElroy and the producers at Constantin Film would want to take a different turn in the reboot that opens today in select theatrical release. It’s a sociopolitical edge, signaled by the use of “America (My Country, ’Tis of Thee)” in the trailer seen below, that’s more admirable in ambition than successful in execution.

Gone are the deformed freaks who populated the previous films, and the traveling youths who take the wrong turn are now a diverse group that includes Jen (THE LODGERS’ Charlotte Vega) and her African-American fiancé Darius (Adain Bradley), and gay couple Luis (Adrian Favela) and Gary (Vardaan Arora). Serving as the voice of privileged prejudice is Adam (Dylan McTee), who looks down on the inhabitants of Wrenwood, Virginia as redneck hicks when they stop in at a local bar ahead of a hiking trip. The locals aren’t too thrilled to see these outsiders either, and the proprietor of the bed-and-breakfast where they’re staying warns them to stay on the designated trails. But of course, the sextet, rounded out by Adam’s girlfriend Milla (Emma Dumont), strays into the Appalachian woods in search of an abandoned fort, and run afoul of “The Foundation,” a small, self-sufficient colony who don’t take kindly to anyone encroaching on their turf. 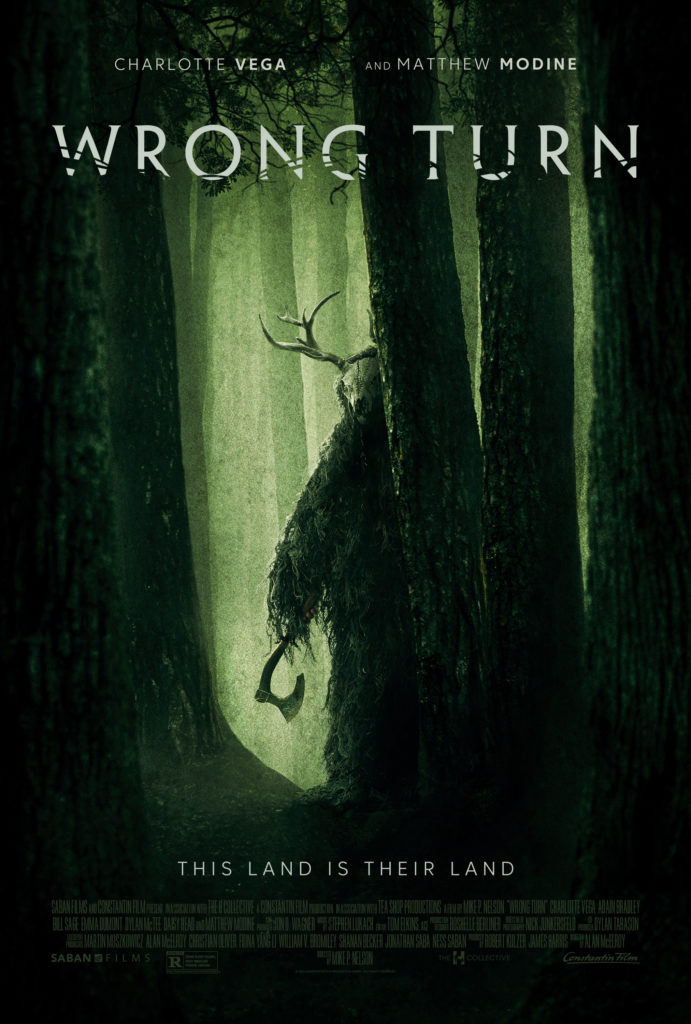 McElroy’s script sets up parallels intended to blur the lines between the villains and victims: Darius’ dream is to establish a utopian, inclusive community, of the type the Foundation represents a primitive variation. (They evidently have some of the amenities of civilization, though, as witness the perfectly trimmed beard on their leader John Venable, played by WE ARE WHAT WE ARE’s Bill Sage.) There’s particular relevance to the Foundation’s formation given recent events: In 1859, prior to the Civil War, its founders saw the country’s divisive violence coming and wanted no part of it, literally heading into the hills to escape it.

Rather than the cannibalism of the ’03 film, this WRONG TURN would like to offer food for thought, but McElroy and director Mike P. Nelson can’t quite pull it off. The main issue is the way the filmmakers stack the deck: We’re meant to identify against Adam’s class bigotry and see the Foundation as somewhat reasonable in their terrorization of the youths (after one of their own has been killed), yet the movie presents the Wrenwooders as backward, menacing good ol’ boys and gals, and the Foundationers are costumed and filmed for maximum scariness and freakiness. Despite the surface plays at evenhandedness, it’s never in doubt who we’re supposed to sympathize with. And for all its stabs at progressiveness, this is still a film in which Darius bargains for his life with his potential contributions to the Foundation’s society while Jen simply offers herself up as good breeding stock.

Thematic concerns aside, Nelson does serve up moments of visual bravado, particularly the impressive long-take final shot, and there are a few impactful head-busting makeup effects by Ryan Schaddelee. Vega holds the center nicely as the final-girl-to-be, Sage projects a strong sense of corrupted authority as Venable and Matthew Modine (who’s starting to look a little like Lance Henriksen) is sufficiently committed as Jen’s father, who we first meet in a six-weeks-later prologue searching for her. The supporting roles, on the other hand, are either too thinly or too generically conceived to have much impact, and plausibility sometimes becomes an issue in both the progression of the story and the staging of the action. The new direction Nelson and McElroy have taken with this reimagining isn’t a wrong turn, exactly, yet there are too many narrative bumps and holes on the road to its destination.