Movie Review: There’s Nothing to be Afraid of in This “SCARE ZONE”

Press releases for Terror Films’ latest, SCARE ZONE, cite that writer-director Jon Binkowski’s long-harbored curiosity with the idea of whether an actual psychopath could end up in the shadows of a local haunted house and butcher patrons is the inspiration for his feature debut. So it must’ve felt like a godwink when Binkowski was afforded the chance to use a maze from Universal Studio’s Halloween Horror Nights event as the backdrop for his film, as the attraction was sitting empty, awaiting an upcoming haunted attraction convention. However, it takes more than fortuitous timing and a persevering interest in the macabre to churn out an even halfway decent genre film, and SCARE ZONE is an unfortunate example of that.

Working as a scare actor may seem like the perfect gig for a horror fan, and for the new crew at the titular Scare Zone strip mall haunt, the third annual iteration of the event gives them the chance to don the ghastly make-up and costumes. However, underneath the veil of theatrics, strobe effects, and thick plumes of fog, real bodies begin to pile up. Someone is murdering the hired help and stashing their corpses in plain sight, turning the crew’s dream job into a living nightmare. 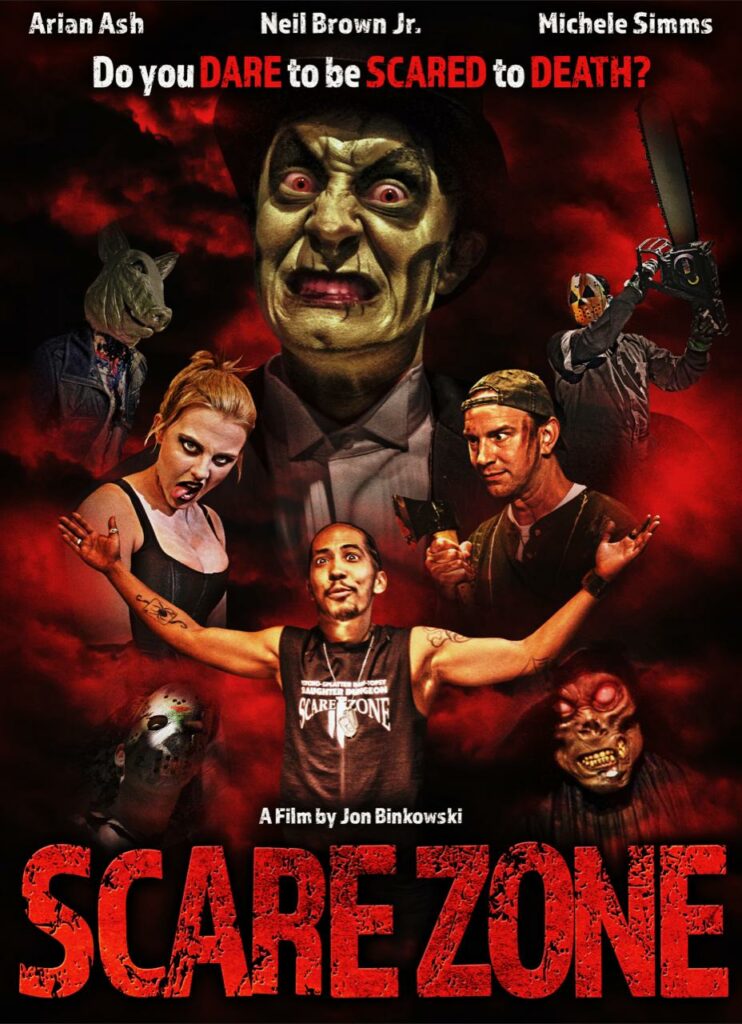 For anyone who grew up on late ‘80s sitcoms, SCARE ZONE will instantly evoke memories of the golden age of tube television delights, as it feels similar to those special Halloween-themed episodes that so many shows rolled out. There are goofy gags, cheap party store decorations, and fake blood by the bucketful. In fact, the messy gore effects are the one shining star of the film; Everything else is just a mess. The cast, which includes The Walking Dead alumni Neil Brown Jr. and Jordan Woods-Robinson, is shackled with exhausted stereotypes that we’ve all been eye-rolling at for years. An uninspired soundtrack sounds freshly ripped from a stock library of tunes begging for commercial exposure, interspersed with the occasional indie rock riff from bands who sound better suited to score high school proms than motion pictures. An inordinate portion of the film is devoted to trying to be funny, but character quips and sight gags grate on with such banality that they lack even minutely tolerable qualities. There’s even a brief instance of a laugh track used in response to a joke. That sort of thing works in the context of Adam Green’s marvelously meta Holliston because of its awareness of how bad the device is; That’s why we’re able to meet the canned chuckles with real ones. SCARE ZONE, however, is just bad, and trying to muster the motivation to laugh at any of its “comedic” moments isn’t worth the effort.

SCARE ZONE tries to skate by on the premise of being a horror movie but only succeeds in being a filmed expository of an identity crisis. It devotes time and energy into trying to be a buddy comedy, a drama, and a rom-com but misses the mark on each, begging the question: Why even attempt to infuse anything extra into horror when the horror itself isn’t working? There’s a mashup of different genres that crash against one another in such a jarring fashion that enjoying any one component is nearly impossible. Arguing the film’s shortcomings with a discussion about debut features failing to live up to their potential because they were crushed under the weight of their aspirations doesn’t fit this particular scenario because it’s painfully obvious that this film has no idea of what it’s aspiring to be.

SCARE ZONE is likely a case of the idea looking great on paper but failing miserably in execution. Binkowski and executive producer Lisa Enos Smith are accomplished and respected names in the entertainment industry, especially as it relates to the production of special events at theme parks. The pair have an astonishing body of work between them, having helmed shows based around properties such as Shrek, Pirates of the Caribbean, and The Bourne franchise. Since wrapping production on SCARE ZONE, Binkowski has gone on to direct several other projects – many to great acclaim – but nearly all are in the comedy and drama realm. Those inspirations would explain why such an attempt was made at infusing a breadth of different genres into this film, but it only makes for a muddled take that lacks any real horror chops.

SCARE ZONE is now available to stream at Terror Films.