MOVIE REVIEW: TROMA’S “VICTOR GOODVIEW” IS A DEPRAVED DARK COMEDY WITH SOMETHING TO SAY

If you are familiar with Troma Team, then you know that they are only interested in making their films, their way.  Their outings are always debased, debauched and depraved while routinely being subversively amusing.  “Victor Goodview” from writer/director Vincent Turturro is no different, but at the same time, so far from what you would expect.  There are no mop wielding vigilante mutants, no classical Japanese dance-drama Sergeants, not even a single irradiated killer teenager.  Despite missing all of that over the top weirdness, it still has that touch of Troma, which is to say that it is intentionally and beautifully stilted while still remaining poignant.

“What is a low point in life for Victor ends up being a high point for audiences.”

Our first introduction to the titular “Victor Goodview” is to watch him unsuccessfully try to make a bowel movement, which both sets the mood for the entire film, and acts as a crucial character point for Victor.  What is a low point in life for Victor ends up being a high point for audiences.  For most of the film, Victor has no discernible agency, or even personality.  He simply struggles to end his long-lasting constipation, while simultaneously pursuing the next high.  He’s swept up in the decisions of the people around him, who all behave in the perfectly bizarre Troma fashion, helping add to the off kilter feeling that Victor must be feeling.

Every single set piece, every single surface, looks like it would give you a staph infection/tetanus combination, except of course for the gentrified coffee shop that Victor is hoping to get hired by.  This seems intentional as a way to showcase a fringe society, as well as a subtle commentary abound class and race relations.  Victor seems like a tourist in the lifestyles of other people, uncomfortable but trundling along in pursuit of getting high to forget that he’s pretty much ruining his life. 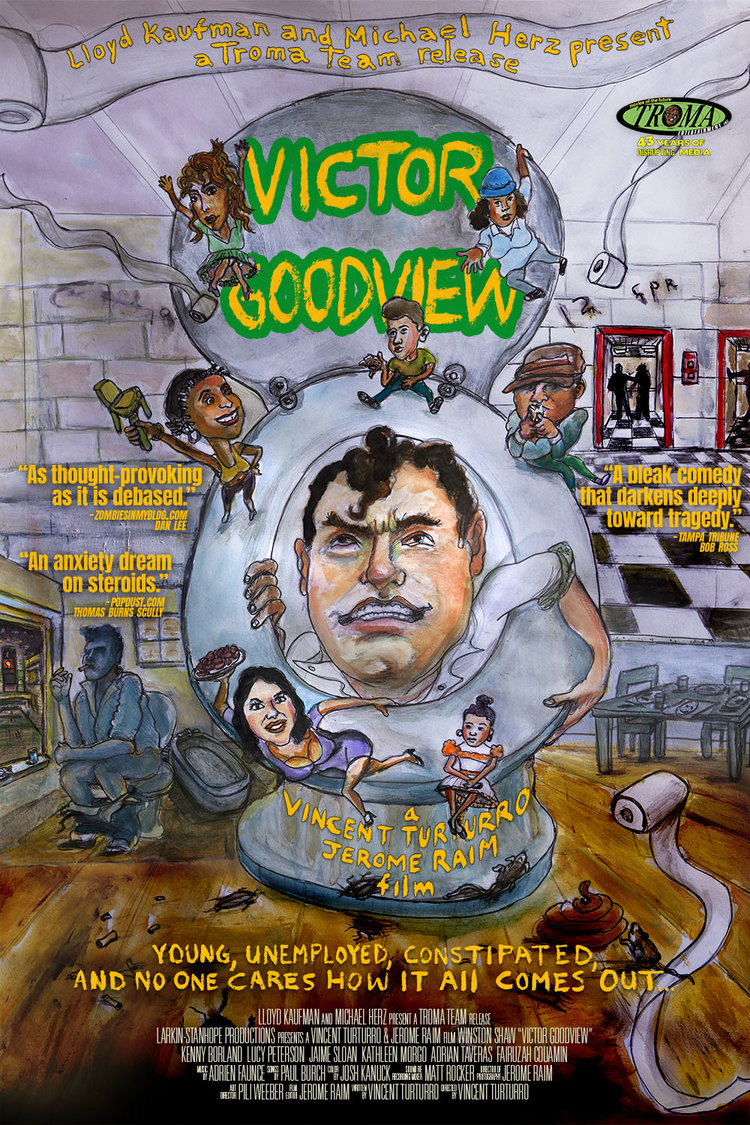 Actor Winston Shaw who plays Victor does a genuinely incredible job of playing a character that might otherwise be seen as too weird to be believable.  He delivers a realistic confusion, sickness, tiredness and all-around lethargy that makes his seemingly random decisions make a sort of twisted sense.  He’s let his hedonism and his sense of entitlement go way too far, and now he’s somewhat lost all sense of self.

Around Victor is his questionable “friend” Rick AKA Black (a nickname that doesn’t stick with anyone other than Victor) who seems genuinely concerned about our main character, while also probably manipulating him to his own gains.  Victor is also harassed by a Latina neighbor who seems intent on pushing him into an ill-fitting parent role for her daughter.

While this odd combination definitely has a surreal quality to it, the end product ends up having its own sort of charm.  There are moments where all of this pseudo-drama seems pointless, but isn’t that always the case?  Aren’t we all, in a way, just full of our own shit?

“Victor Goodview” is definitely worth checking out, which you can do at the Anthology Film Archives on Wednesday, March 6th at 9:30 PM.

You can also catch it for video release on March 12th.