Any serious shock-rock lover has to dig Ghost. However, the Swedish heavy metal band has always divided metalheads for some reason. Since the release of their first album in 2010, it’s been a love-it-or-hate-it situation. Even if their music isn’t on the extreme side (as some might expect from an overtly satanic outfit), there is a whole lot to love about the visual aspect of the band, with album cover art referencing classic genre movies (SALEM’S LOT, NOSFERATU, ROSEMARY’S BABY, etc.), and awesome horrific videos. Just like the one seen below for “Kiss the Go-Goat,” from their two-song EP SEVEN INCHES OF SATANIC PANIC, out today from Loma Vista Recodings.

In the video, we can see Ghost’s Papa Nihil reminisce about the good ol’ times—specifically 1969 (hello, Tarantino!), back when go-go reigned…alongside Lucifer, of course. In his memories (the most perfect TV-directed flashback), Ghost was a moptop-rockin’ band, with keys up front and a sound somewhere between The Doors and Arthur Brown. A lot less heavy than usual, but God, it is still so much fun. The same can be said of the B-side, the beautifully melodic “Mary on a Cross,” which is even softer, a Beatles-meet-Abba ballad, but oh so satisfying. And how about the colorful cover art, a satanic psychedelic masterpiece (think YELLOW SUBMARINE or classics from Cream and Hendrix). Once Upon a Time in…Hell. 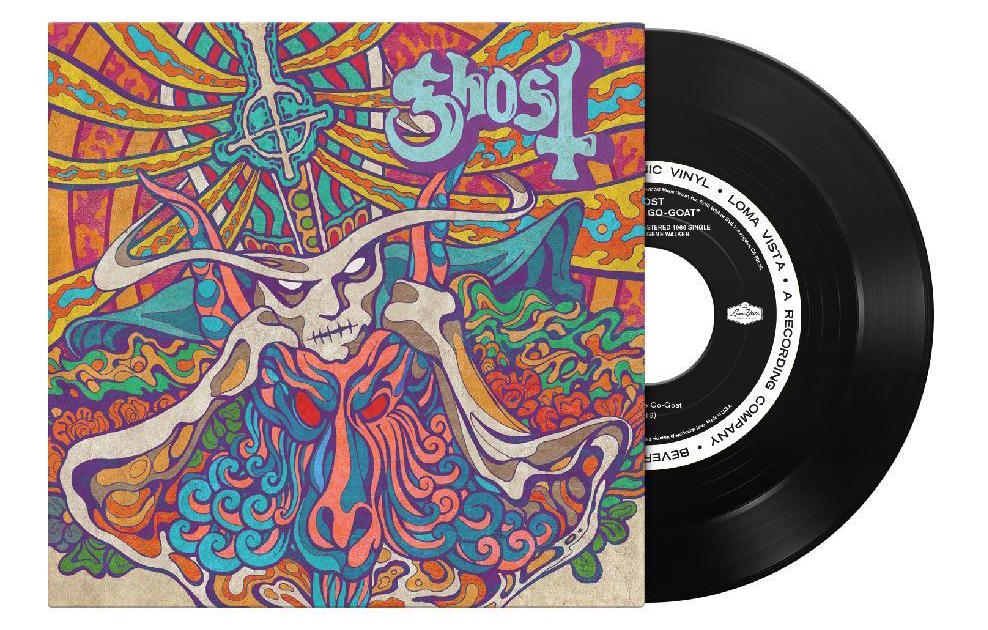