Municipal Waste doesn’t need an introduction. And now that Slayer is gone, they are indisputably the heaviest and fastest thrash metal band today, and among the hardest-working ones. Hell yeah. This is especially true on ELECTRIFIED BRAIN (out today from Nuclear Blast), their latest offering since THE LAST RAGER EP (read our review here), released a pandemic ago. And we have to say, founders Tony Foresta (lead vocalist; pictured second from left) and Ryan Waste (lead guitarist, also on back vocals; third from left) may have put together their finest and strongest record since the group’s inception in 2001.

The Richmond, VA quintet’s seventh full-length album was produced by Arthur Rizk (the dude behind Power Trip’s masterpiece NIGHTMARE LOGIC), and it sounds so damn powerful. The drumming by Dave Witte (a.k.a. the craft beer-lovin’ man with a thousand bands; far right) is as tight as ever, while still being groovy and varied rhythm-wise, thanks also to mighty bassist/singer Land Phil Hall (second from right). Since they added Nick Poulos (far left) as second guitarist back in 2015, they gained a welcomed heaviness, without losing their hardcore/crossover trademark humor and sense of fun.

The Waste has been neck deep into horror since day one, visually and thematically. From their hilarious lyrics to all their videos, often inspired by favorite movies from the ’80s (the metallic short film for ELECTRIFIED BRAIN’s title track pays homage to the works of many classic auteurs, including Cronenberg, Craven and Gordon; see it below and read an interview with director Norman Cabrera and Waste here). Just look at the eye-poppin’ cover art, where the trademark electric ax is going through a ’banger’s skull, with graphic details. And there’s always tons of blood and mayhem in their rhymes, featuring zombies, witches, graves, tombs, blades, gore, terror and post-nuclear stuff, of course. 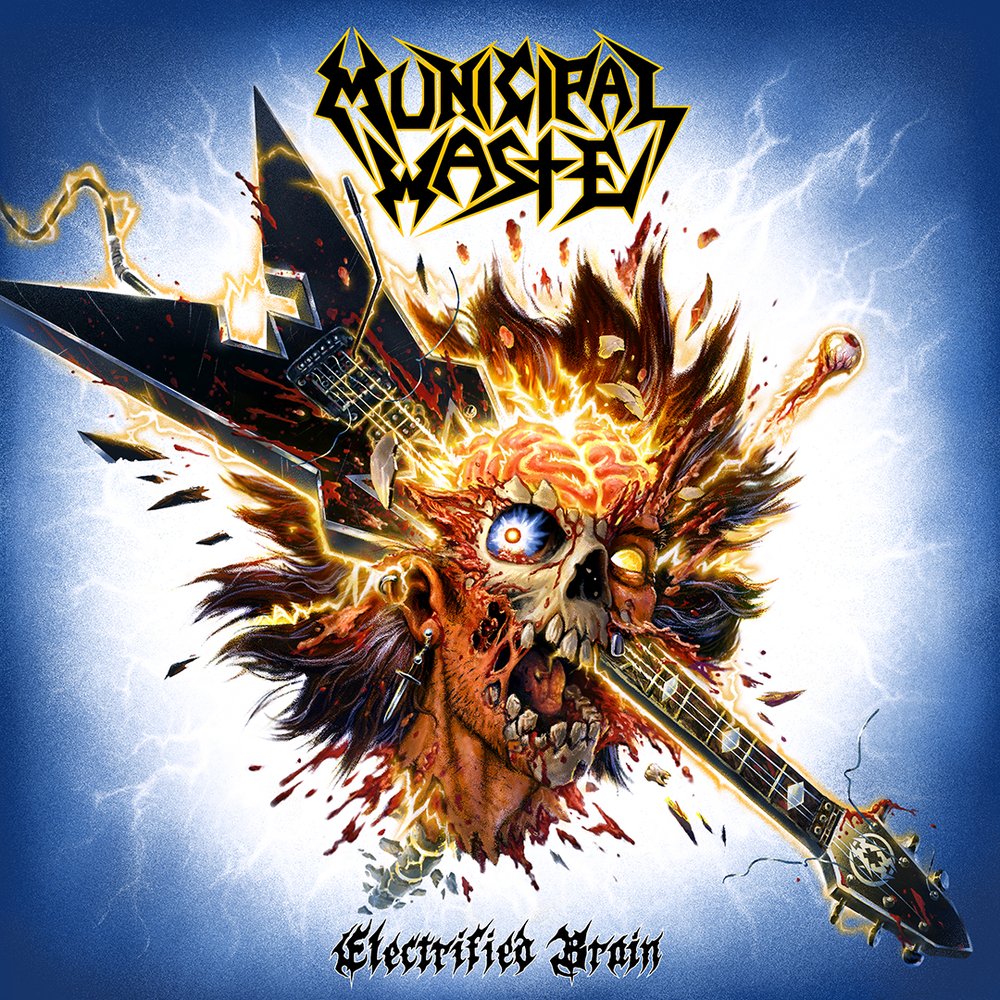 All killer, no filler: You get 14 short tracks, the average clocking in just under the two-and-a-half-minute mark. This record is an awesome hoot, screaming to enter into heavy rotation on the playlist of your drive-in’s tailgates and/or summer beerBQs, as you high-five your best pals after cracking open a few cold cans. Because when there’s a song about fermenting a corpse in oak barrels to make a very special brew, you know it’s perfect for the living dead, hungry cannibals and you, RUE MORGUE readers.

Here are a few highlights from ELECTRIFIED BRAIN. From the get-go, the record kicks the door open with the title track, a fast one with some nice SHOCKER vibes and a great solo. “Grave Dive” is yet another stage dive-inducing joint, because the Waste dudes like their mosh pits well-rounded and their play area crowded. “Thermonuclear Protection” starts by thrashing madly before, halfway through, getting into a slower-paced, fist-pumping banger that might make you real thirsty.

“Crank the Heat’s” gang vocals are sick, while one-two punch “Blood Vessel”/“Boat Jail” is a true neck-breaker. Seriously, the energic last part grinds its (fast)way through a delicious 30-second blast beat. “Ten Cent Beer Night” manages to pay homage to early Metallica (with a lightning-speed solo involved, of course) and old-school Scorpions (in its epic ending), and that is so freaking rad.

“Putting on Errors” might be the heaviest track on the record, and turns Hall’s harsh vocals (you might also want to check out his death metal band Cannabis Corpse) to great use. Lastly, “Paranormal Janitor”–what a toxic beast of an album closer, that’s for sure. That riff. That eerie, yet gnarly chorus. Wow.