“Nightmare Toys” Is A Wicked Wonderland for Horror Collectors

Horror collectors will attest that true fandom far exceeds the dark confines of the movie theater. Luckily, brands like Fright Rags, NECA, and Trick or Treat Studios (among so many others) have been keeping closets full and shelves lined with a bounty of masks, shirts, and figures for bloodthirsty fans willing to part with the cash. Kristy Adams, owner of Las Vegas-based NIGHTMARE TOYS, started her business as a means to satisfy the wants of fellow collectors and is often one of the first places the hardcore hobbyist turns to in search of a new product. Keeping her base informed about every step of the purchase process, from pre-order to delivery, marks a customer-first approach that is a breath of fresh air in commerce, and sets a precedent that any retailer, big or small, would do well to follow. Kristy spent some time with Rue Morgue to discuss how for her, and collectors like her, NIGHTMARE TOYS has been a dream come true.

You’ve built a following on social media, but introduce yourself to those who may not be in the know.

I’m just a small-town girl from Illinois that grew up in a middle-class family. Horror and dancing are my two favorite things in life, both of which came from Michael Jackson’s “Thriller.” Watching that for the first time is what got me into horror movies and got me to like dancing as well. Afterwards, I saw the “Making of Thriller” video and it just kind of went from there.

People that want to be involved in horror usually want to act, direct, or write, but you wanted to own a horror collectibles store. Why?

I love collecting in general, but I really love horror toys. At the time, I had a job that I needed to get away from, and Philip Martin, who’s my partner in this, said, “Let’s just open up a little store.” We owned other businesses, so we already had the business knowledge, and that’s how it all got started.

How old were you when you started collecting?

I didn’t actually start until 2014 when I was already an adult. I didn’t do it as a child because, although I could watch horror movies, my family still was like, “Oh, that’s a boy thing.” They weren’t going to buy me the toys or anything of that sort. Thank God they did at least let me watch the movies, even if they didn’t always agree with some of them.

NIGHTMARE TOYS first opened its doors in Madison, Alabama, but you’ve since relocated to Las Vegas. How have things evolved over time?

It’s still mind-blowing to me that this is even happening! In Alabama, we had a small store in a little shopping center. I built the social media, which gave us a big online presence, and we eventually grew out of the store there. We love Vegas; we always visited about twice a year for conventions and other stuff. We thought we would be a perfect fit here, and it’s been great. We get so many people that come from California, Arizona, and other states that are just coming to see NIGHTMARE TOYS. We’ve become kind of a tourist attraction. We had a 2000 square foot store in Alabama, now our store is 4000 square feet and we’re adding on another 2000 feet right now.

What are some of your most sought-after pieces, and is there anything collectors should keep their eyes open for?

The biggest thing that we sell is anything Michael Myers. I don’t care what it is: masks, costumes, figures – whatever, it sells. Everybody loves Michael Myers. And Chucky. Chucky dolls and stuff, those are also big sellers. I think Trick or Treat Studios’ 12-inch figures are really going to be next big thing. They have quite a few figures out now, and there are going to be more coming soon.

You’ve hosted a few in-store celebrity signings, and are a frequent presence at conventions. What events do you currently have planned?

Our signings, we’re going to be doing frequently, maybe once every other month or so. Our first big one was when we had our grand opening, and that was with Kane Hodder, Danielle Harris, Tamara Glynn, and Drew Marvick. Drew’s a local here in Vegas and did Pool Party Massacre, and we all love him. Danielle Harris signed our bathroom wall. My friend Sean Hill is the one that designed our bathrooms and people will go in there and take pictures, and I have her autograph in there. We have Tony Todd coming up, Kane Hodder is coming again on November 13th and we’re working on someone for December, along with a few others for next year. We also want to start doing more conventions. We just did Midsummer Scream, and next we have Texas Frightmare Weekend followed by Days of the Dead here in Vegas.

You’re growing NIGHTMARE TOYS into a full-on horror brand, which includes the recent launch of your new podcast. What else should fans expect?

The next big thing we’re working on is the Nightmare Cafe bar and restaurant, all horror-themed, of course. Since we’re from Alabama, there’ll be southern food like fried chicken, mashed potatoes, okra, all that fun stuff, but also burgers, fries, and bar food. We’ll have a kid’s menu and we’ll come up with a couple of desserts, too. We’re still throwing around decorating ideas, but you’ll see kind of a mixture of both horror movie memorabilia and spooky stuff, so it’s a little of everything.

For more information on NIGHTMARE TOYS, head over to www.nightmaretoys.com. 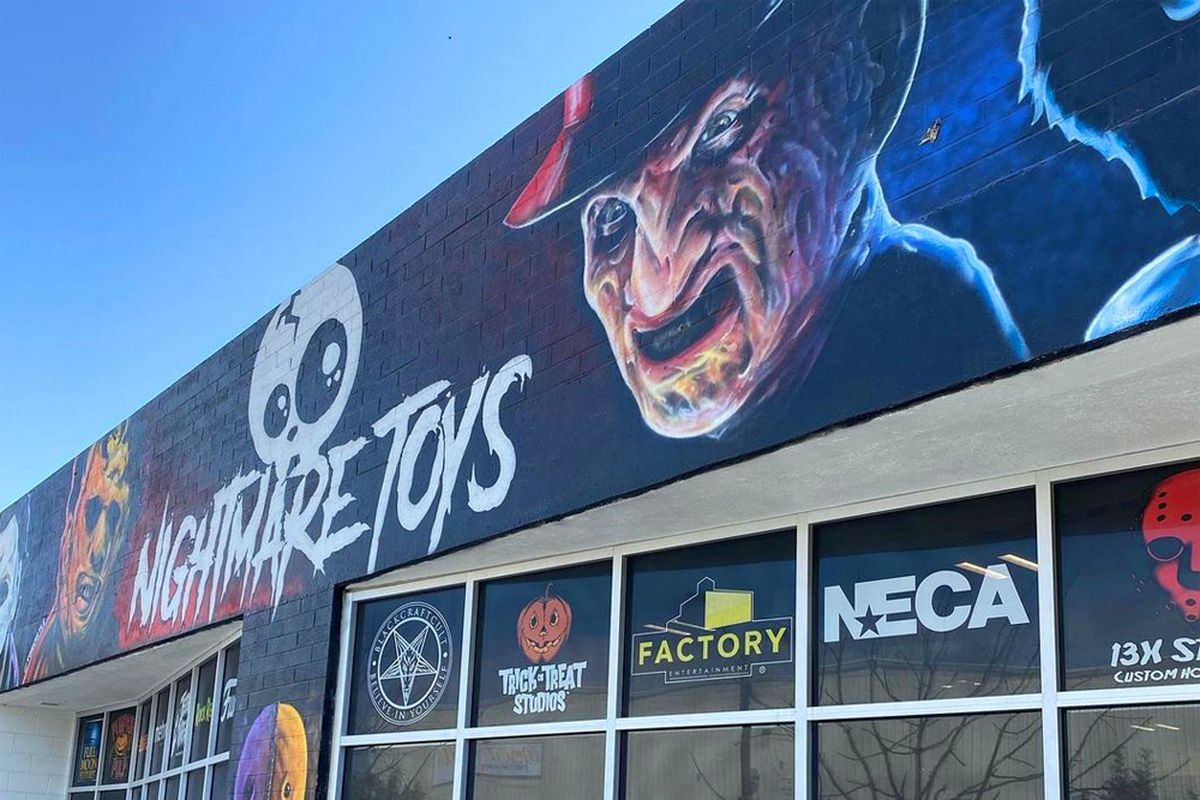