Panic Fest ‘21: “KATHERINE’S LULLABY” aka “CAPTIVE” Is An Uncomfortable Study Of The Relationship Between Captor And Captive

While the premise of KATHERINE’S LULLABY requires some major suspension of disbelief to truly invest in its plot, there is something a bit too real about the danger posed by delusional widower Evan (William Kircher, The Hobbit) when he takes in/kidnaps teenage runaway (Tori Kostic), who resembles his missing daughter Katherine a little too closely. The runaway in question, Lily, has just escaped her own abusive father with the help of her boyfriend (Jairus Carey), but when the two are separated in the forest at night, Lily approaches Evan’s secluded home with the hope of finding help. Instead what she finds is yet another overbearing father only too willing to believe she is his daughter Katherine, who ran away herself for reasons nearly identical to Lily’s.

First, the pros. KATHERINE’S LULLABY is skillfully acted, shot, and directed; debut director Savvas Christou will certainly be one to watch. The film is incredibly tense, as a psychological thriller should be, with Lily’s various failed attempts to escape her replacement father are enough to get the heart racing. The best part of KATHERINE’S LULLABY is without a doubt the plot-twist packed final twenty minutes, where Lily is forced to come face to face with the consequences of integrating herself into Evan’s life and intense workout routine in preparation for her upcoming race (Katherine was apparently a track star). 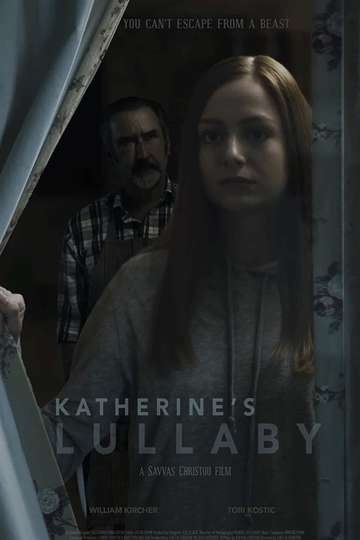 Littered with flashbacks of both Katherine and Lily’s traumatic confrontations with their respective abusive fathers, KATHERINE’S LULLABY does on occasion border on the melodramatic, perhaps saved only by the strength of Kircher and Kostic’s performances. While I had some doubts early on about whether Kostic could successfully carry the film as Lily, she eventually won me over and is genuinely a bit terrifying in the film’s shocking conclusion.

For anyone looking for escapism in their horror, KATHERINE’S LULLABY is not for you. Having recently been a teenage girl myself, the very real threat of sexual assault that hangs over Lily in the film’s horribly uncomfortable first half fortunately does not come to fruition but is a turn-off nonetheless. There is a strange attempt at almost-comedy when that threat is averted, that does not sit particularly well either. It would also have benefited KATHERINE’S LULLABY if the film had committed fully to either making Evan a sympathetic mentally ill man who has recently lost his family, or to making him a truly horrifying captor, but his characterization lands awkwardly in the middle of the two in a way that does not quite pay off as intended.

KATHERINE’S LULLABY may or may not be worth a watch depending on your tastes, but at the end of its 89 minutes, “uncomfortable” was the prevailing feeling I was left with. KATHERINE’S LULLABY premiered at Nevermore Fest 2021 and was screened as a part of Panic Fest ‘21’s lineup this past Thursday. Check KATHERINE’S LULLABY out to see the starring-role debut of up-and-coming actress Tori Kostic, who I predict will have great success in genre film if she keeps at it!