RETRO RECOMMENDATIONS: “INTERVIEW WITH THE VAMPIRE” (1994)

Vampires in the world of author Anne Rice do not sparkle, but they shine exceedingly bright thanks to the literary techniques that weave together their stories in The Vampire Chronicles. And with the release of her must-read novel Interview with the Vampire (1976), which is an utter triumph, Rice created another successful iteration of the undead 42 years ago.

Eighteen years passed before Hollywood finally adapted her story for the Silver Screen. It was worth the wait as A-List actors Tom Cruise and Brad Pitt were offered the main roles of Lestat de Lioncourt and Louis de Pointe du Lac respectively. Their acting and on-screen chemistry enhances an already stellar story.

The movie, and novel for that matter, are more memoir than the traditional three-act structure. However, there is plenty of conflict to rival any vampire-film contemporaries. Pitt brings a human quality to his portrayal of the vampire Louis which in turn creates an empathy for the tortured soul that resonates loudly with audiences.

Antonio Banderas gives a wonderful albeit brief performance as the vampire Armand. Louis’ thirst for knowledge coalesces with Armand’s wanton desire to have de Pointe du Lac all to himself – a companion for all eternity. Unfortunately, it’s Claudia’s murderous rage that not only seems to have robbed the world of Lestat, but it is that same crime that inadvertently gives both Louis and Armand what they want. And it comes at the highest of costs.

In addition to the triumphs of these actors’ performances, the art direction by Malcolm Middleton and set design by Francesca Lo Shiavo were not only breathtaking but good enough to garner Academy Award consideration. Their underground world of the bloodsuckers brought an ominously beautiful atmosphere to this must-see movie Interview with the Vampire.

Louis (Brad Pitt) did not appear on screen quite as described in Anne Rice’s novel. “The vampire was utterly white and smooth as if he were sculpted from bleached bone,” Rice wrote. “And his face was as seemingly inanimate as a statue except for two brilliant green eyes that looked down at the boy intently like flames in a skull.” Louis sounds more akin to Ghost Rider than a vampire in Rice’s story; Pitt still looks intriguing in Louis’ on-screen interpretation.

Interview with the Vampire was produced on a budget of $60 million. The film was a box office success as it took home over $105 million domestically and $118 million in foreign receipts for a worldwide total of nearly $224 million.

Louis (Brad Pitt) and Armand (Antonio Banderas) seem destined to come together in the film, but it isn’t in the stars. However, in the 1976 novel, they do end up with one another following Claudia’s death. The relationship is strained though, because of Armand’s part in Claudia’s demise, and ultimately falls apart.

Some people are not meant to enjoy horror films. Unbelievably, Oprah Winfrey walked out of the Interview with the Vampire premiere because she could not handle the blood and violence. However, she found the stamina to fight through the manure that was her performance in the 2018 motion picture adaptation of A Wrinkle in Time (1962). Peculiar, no?

A slew of young actresses auditioned for the role of Claudia including Kat Graham (The Vampire Diaries), Natalie Portman, Christina Ricci, Julia Stiles and Evan Rachel Wood. Kirsten Dunst ultimately brought Claudia to life on the Silver Screen at the tender age of 12.

Nearly two decades passed between the publication of Interview with the Vampire (1976) and the release of the 1994 motion picture adaptation. Believe it or not, a late 1970s version of the project eyed John Travolta to play the antagonist Lestat de Lioncourt.

Johnny Depp was offered the coveted role of Lestat before it was won by Tom Cruise. Author Anne Rice reportedly met with Tom Hanks to play the part, but he turned it down to pursue Forrest Gump (1994). Even Jeremy Irons had an opportunity to portray Lestat, but he passed up the chance because he didn’t want to go through the make-up process again after his work in The House of the Spirits (1993).

It is always a tragedy when the good die young. The late River Phoenix was originally slated to portray “The Boy” Malloy in the movie. Once Christian Slater stepped into the part, he donated $250,000 of his salary to a pair of charities in honor of Phoenix.

Tom Cruise reportedly spent more than three hours a day in the make-up chair, but the vampire make-up applications were an arduous task at best for everyone portraying the undead on screen. All those actors were required to hang upside down, so their facial blood vessels were accentuated. The makeup artists were then able to trace over the swollen blood veins to create that eerie look that comes across on the Silver Screen.

On March 26, 1995, Brad Pitt and Tom Cruise won the Razzie for Worst Screen Couple at the 15th annual Golden Raspberry Awards. In certain scenes of the film, Cruise stood on a platform to make up the height difference between himself and his co-star Pitt. Pitt stands 5’11” and Cruise is only 5’7”.

Kirsten Dunst was nominated for the Best Supporting Actress Golden Globe when she was only 12-years-old. But Dianne Wiest beat Dunst out thanks to her performance in Woody Allen’s Bullets over Broadway (1994). Dunst reportedly lost by one, single vote.

Interview with the Vampire was the first film production granted permission to shut down two lanes of traffic on the Golden Gate Bridge in San Francisco.

The scene in which Santiago (Stephen Rea) dances upside down on the tunnel ceiling was inspired by Fred Astaire’s remarkably choreographed dance in Royal Wedding (1951). The same technique was executed in Wes Craven’s A Nightmare on Elm Street (1984) during Tina’s (Amanda Wyss) revolving-room death sequence.

Huh, talk about your method acting. Tom Cruise watched videos of lions stalking and slaughtering zebras to prepare for his portrayal of the vampire Lestat. Wait, what? Pardon the cliché, but Cruise really sank his teeth into the part.

Shockingly, there was a point in the film’s development in which the character of Louis was close to being rewritten as a female vampire. Why? Reportedly, Cher and Anjelica Huston were in the running for this role.

Interview with the Vampire premiered in Westwood, California on November 9, 1994. The film was nominated for two Oscars: Best Original Score and Best Art Direction/Set Decoration. 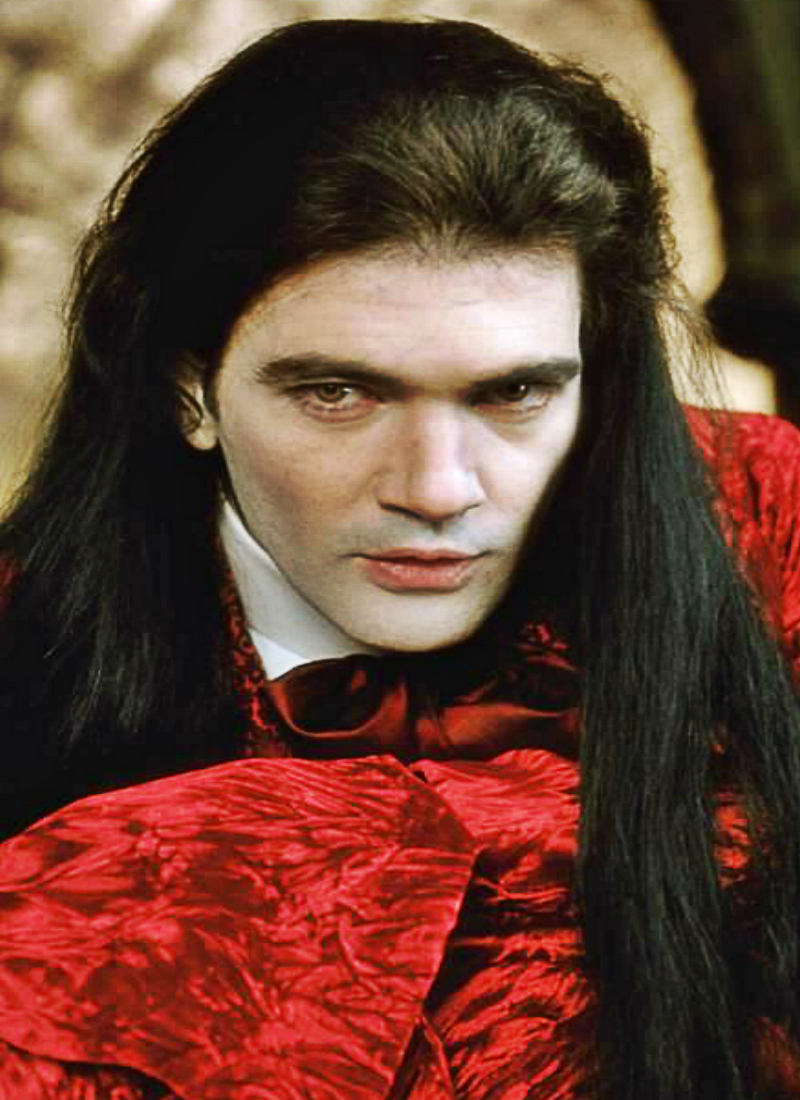