RETROSPECTIVE: A KILLER ON THE HIGHWAY PLAYS “ROADGAMES” (1981)

Having finished off two seasons of the WOLF CREEK television series, I was in the mood for something else with an Australian setting and turned my attention to ROADGAMES (1981), which I remembered fondly from its seemingly endless programming on HBO back in the day. As it turned out, the movie was just as entertaining as I recalled, and slightly more interesting to these now-experienced eyes… 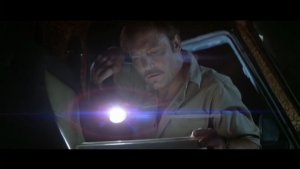 Long haul “truckee” Quid (Stacy Keach) has to get a delivery of meat to Perth in a hurry, thanks to an ongoing strike by meat-packers, despite the fact that he’s already long overdue for a regulated break. But a peculiar incident (a lurking stranger in a window, a distinctive green van) haunts his mind, even as he takes to the road. Soon, a local news report and an unintended passenger give him scraps of information about a recent string of dismembered human remains scattered in cities across the land. Quid’s mind begins to work overtime on the mystery during his long drive, especially after spying the stranger in the green van burying something in the outback. His suspicions and curiosity are only heightened after bouncing some of his ideas off “Hitch” (Jamie Lee Curtis), a free-spirited young woman who he picks up hitchhiking. Is the man in the green van the killer, coincidentally heading in the same direction they are? And how can Quid prove it when his off-putting behavior has begun turning the eye of police in his own direction?

“ROADGAMES is more of a Hitchcockian suspense thriller than a straight-up horror film..”

Now, first up, something needs to be mentioned – you’d think a film from 1981 with Jamie Lee Curtis, that features a “Jack The Ripper”-styled killer would be a horror film, and many sources (including Wikipedia and the TIME OUT movie guide) would agree with you. But ROADGAMES is honestly more of a suspense thriller than a straight-up horror film (the only onscreen killing occurs right at the opening, although the film does end on a ghoulishly gruesome sight gag) and is modeled after many Alfred Hitchcock classics. For a horror film of similar treatment and material, see JOY RIDE from 2001. But what ROADGAMES is, is a very enjoyable thriller, well-paced and executed. Keach’s character is an interesting, cultured renaissance man and ex-mercenary, reciting poetry aloud to his pet dingo, Boswell (the climax of Shelley’s”Ozymandias” gets a passing moment) as he pilots “Gypsy”, his 18 wheeler. The interaction between Quid and “Hitch” features some snappy, quippy dialogue (“I don’t want to get hung for something I didn’t do.” “Meat is hung, men are hanged”) and statements of character (“Just because I drive a truck that does not make me a truck driver”). 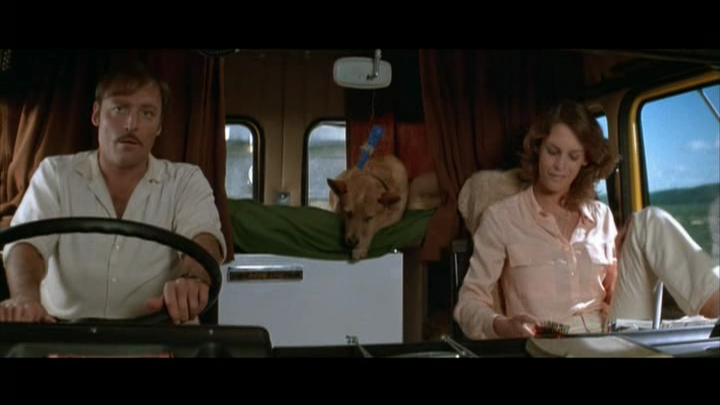 The film also has an interesting mix of fading, 70s-era “car crash” stunt action (a la CANNONBALL RUN, DUEL & SMOKEY AND THE BANDIT) – you’ll see a boat crashed on a desert highway, and an absurdly cartoonish climax involving a “too-big” rig and a “too-small” alleyway – as well as some nice Hitchcockian touches (at roughly the same time Brian De Palma was deploying them). There’s a wonderful circular slow-pan around the increasingly suspicious inhabitants of a remote roadhouse as Quid attempts to inform the disbelieving police over a pay phone, and a suspenseful moment among hanging pig carcasses, as two stand outs. The soundtrack, by Queen’s Brian May, features some bits in the climax that are suspiciously close to Gustav Holst’s “Mars, Bringer Of War,” but this wouldn’t be the first time Hollywood has raided that particular classic. All-in-all, if you find yourself a bit bored by the predictable plotting of modern slasher films, and would rather entertain yourself with a twisty thriller, ROADGAMES should be a satisfying watch.

“if you would rather entertain yourself with a twisty thriller, ROADGAMES should be a satisfying watch”