RETROSPECTIVE: FALL INTO “THE BLACK PIT OF DR. M”

Mexican horror films don’t get a lot of attention, possibly because many of the older movies decidedly echo the Universal films that preceded them and, by the time Hammer films were making their impact, horror in Mexico had wed itself strongly to the luchadora (“masked wrestling”) sub-genre. But a number of these earlier, Gothic attempts are worth seeking out if you enjoy atmospheric, b&w spookers.

When Dr. Jacinto Aldama (Antonio Raxel) passes away, his daughter Patricia (Mapita Cortés) receives a visit from the spirit of her father, who delivers his will and a key to her. Dr. Mazali (Rafael Bertrand), Aldama’s colleague, also receives a message from the dead man – through a medium – that Mazali’s desire to travel into the spirit realm and return to the land of the living will be accomplished through suffering strange events and enduring a terrible punishment.

“honestly this is a fun, Gothic potboiler of the time…”

Then, Patricia meets Dr. Mazali, obtains possession of some jewels and an inscribed knife (“may the fires of hell consume the one who uses me for evil”), and begins training as a nurse at Mazali’s asylum, just as handsome young intern Dr. Eduardo Jiménez (Gastón Santos) arrives. Meanwhile, a lunatic gypsy women uses acid to scar the face of Mazali’s assistant, and they both run off into the night, out of their minds…

Yes, that’s quite a convoluted plot – I haven’t even gotten to the love triangle, the body rising from the grave, and the transmigration of souls! – but honestly this is a fun, Gothic potboiler of the time and the resolution of the “warning from beyond the grave” that Dr. M does not heed, and so suffers punishment for, is nicely done. The acting is also, expectedly, “of the time” (by which I mean it’s pitched at a slightly melodramatic level), but never distractingly so. 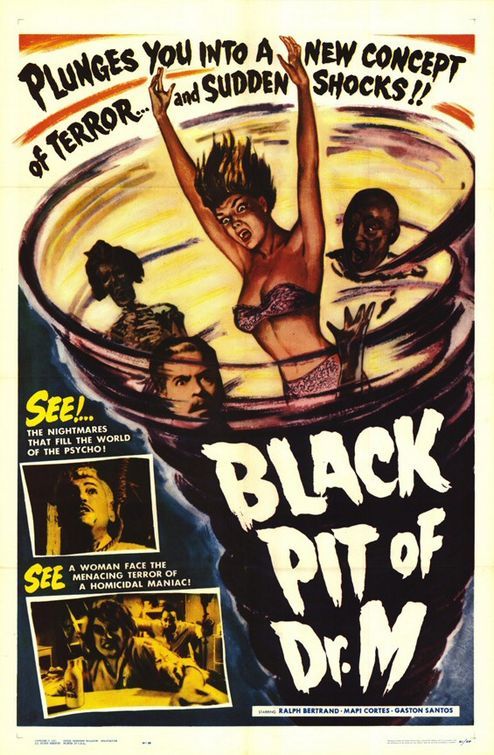 There’s some surprisingly good “acid disfigurement” makeup on display and you even get that horror film staple, the “monster stalks through the fog with an unconscious girl in his arms”! The moody, shadowy sets are eye-catching and evoke a sense of dread. Sure, it may all seem a trifle stiff to modern eyes, but for fans of black & white horror films from the era, THE BLACK PIT OF DR. M is a solidly made film that deserves to be ranked with RKO’s titles, or Universal’s second tier efforts. CasaNegra released a fine dvd of the title in 2006.