As grown adults, we tend to have that one thing from our childhood that gives all the damn fuzzies. It could be a smell, a sound, and for a lot of people in the horror community, physical media such as a film or book from our youth that roped us into the genre that instilled a loyal passion inside of us towards the wonderful world of horror. Personally, I grew up in a horror-loving household and was two-years-old at the time of my first viewing of HALLOWEEN (parenting win folks), so it’s difficult to pinpoint exactly what it was that dove me balls deep into this beloved classification of films. However, I’ll never forget the first time I picked up the trilogy of books blindly from my third grade Scholastic Book Fair solely based on the nightmarish illustrations on the cover that completely hypnotized all my horror-spidey-senses. 30 years later, I still own those books that I originally bought with a week’s worth of lunch money and every once in a while, I nostalgically revisit like an old friend that you’ve never lost touch with. Of course, I’m talking of the glorious author’s Alvin Schwartz and Stephen Gammell designed collection of “SCARY STORIES TO TELL IN THE DARK”. And the beautiful part of it all is, I’m not alone in this memory, as “NIGHTMARE SOUP” illustrator, Andy Sciazko is clearly inspired himself by these childhood horror relics as well.

Artist Sciazko’s artistic style rings all those nostalgic bells of the twisted trilogy terror tales from the ‘80s, however, his original contributions outside of the popular “NIGHTMARE SOUP” books speak volumes of his ability to connect with the world through his drawings. Sciazko’s latest series of endeavors slide from an adorably humorous side of the horror spectrum to downright chilling in a wonderfully splendid way.

DEATH OF THE ENGLISH LANGUAGE series is a brilliant yet simple concept of the artist’s take on the slang terms of the new generation. The sometimes annoyingly overused words like “Bae” or “Spoopy” are appropriately represented by none other than the good ole Grim Reaper in quite frankly, a loveable humorous way that just makes me clamor for an ongoing continuation series of this cute as hell little Death guy. 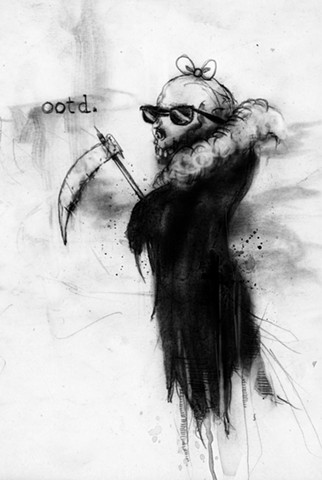 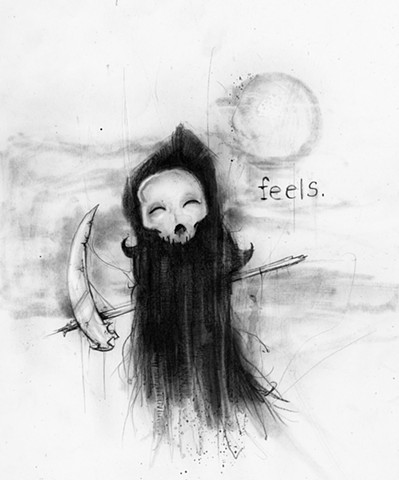 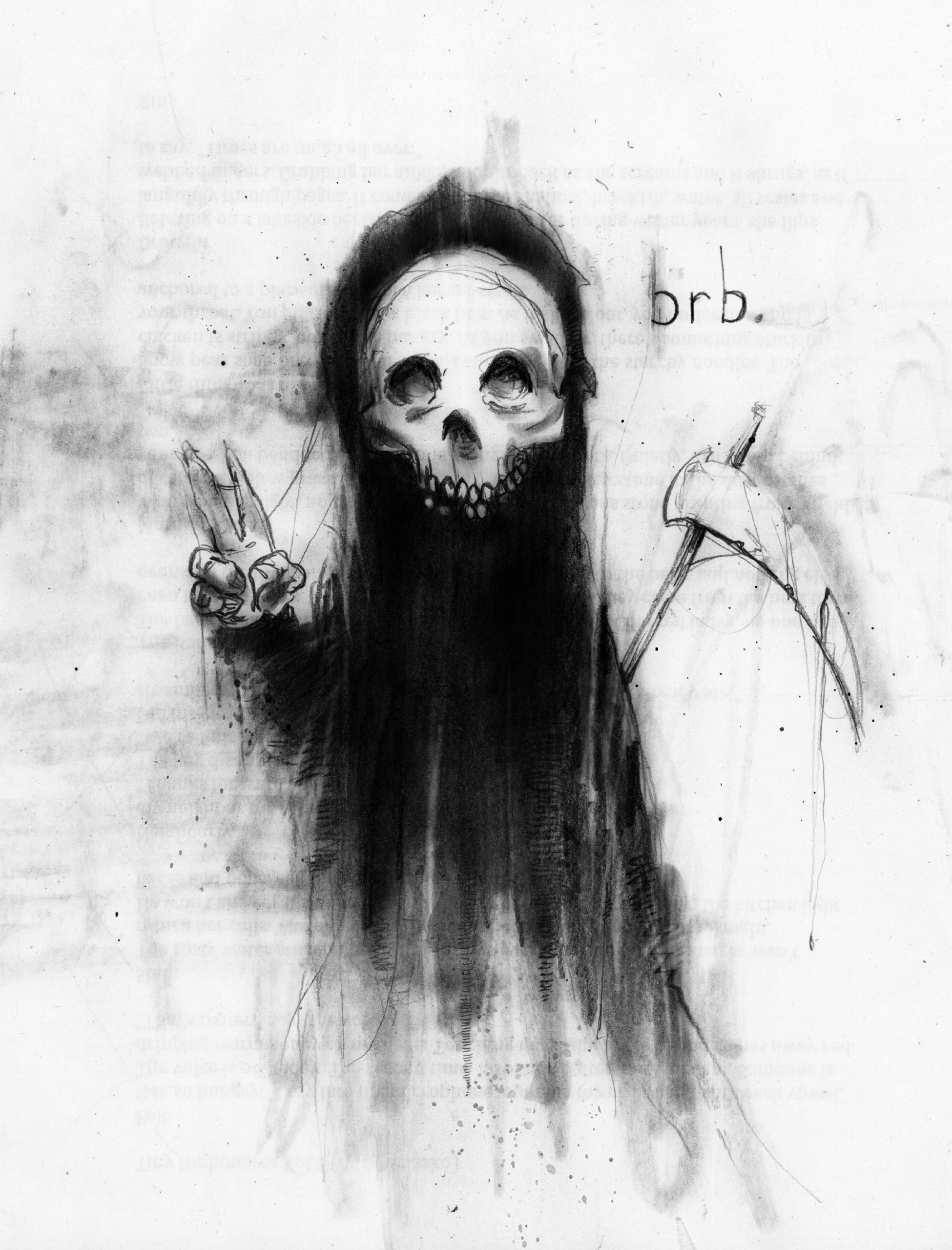 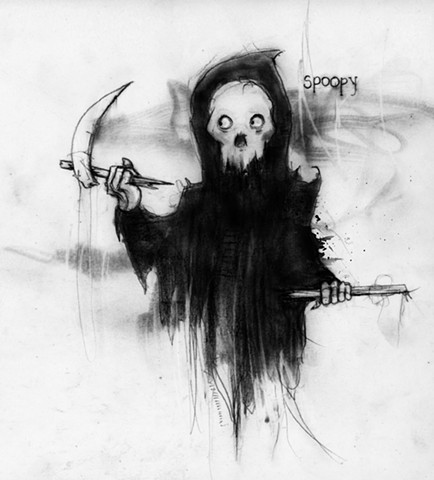 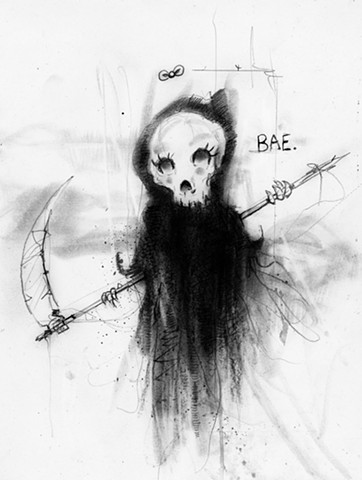 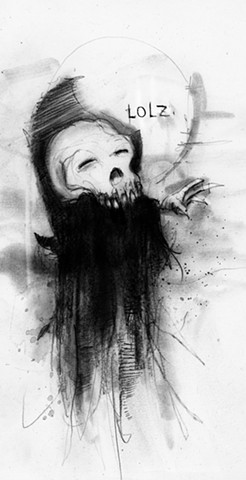 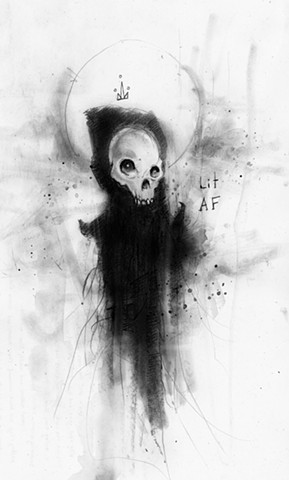 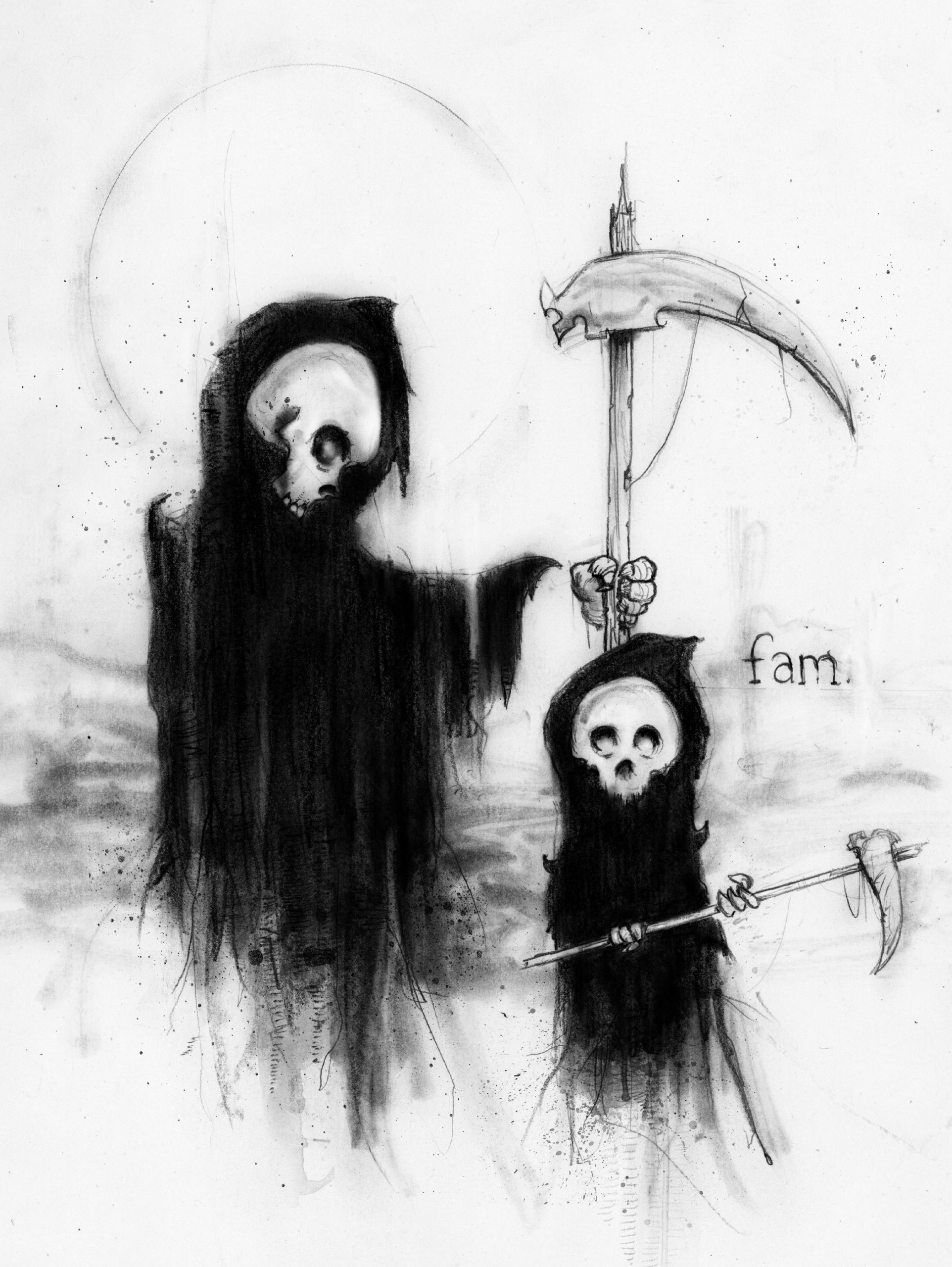 For those who crave something dark and mysterious, the HELL IS HERE collection is well, just that folks. For the true creepy connoisseur, this body of twisted imagery invokes both the skeevies and raises questions as to the true meanings behind this series. 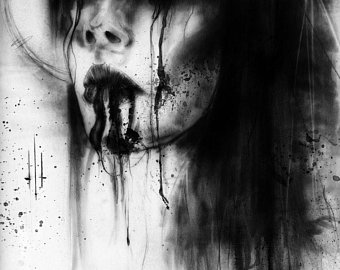 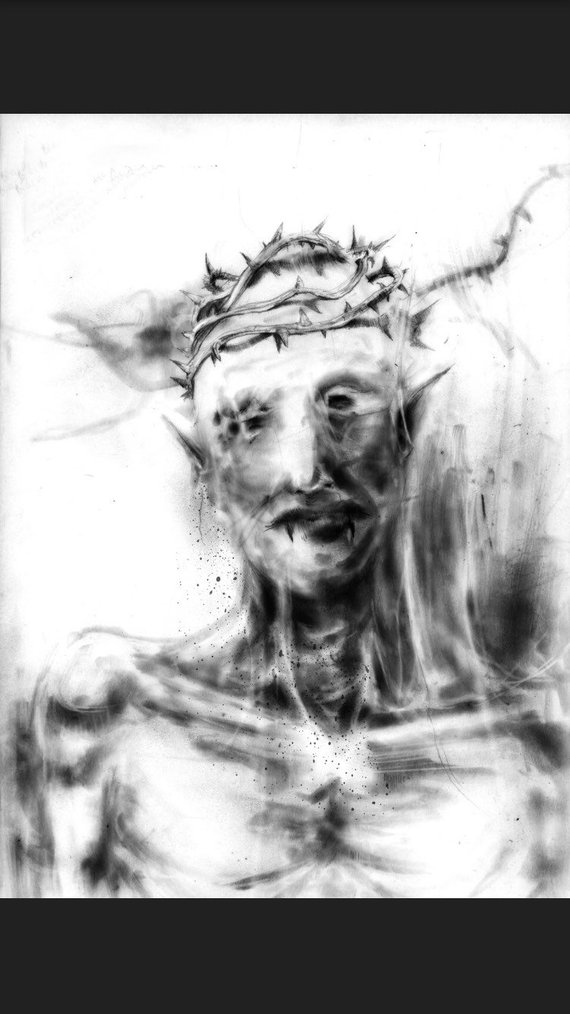 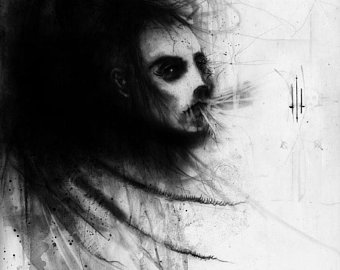 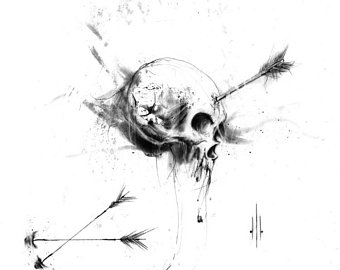 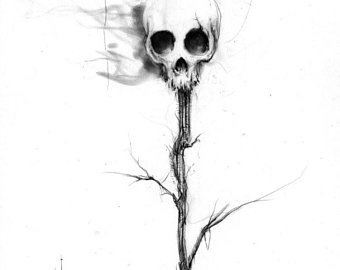 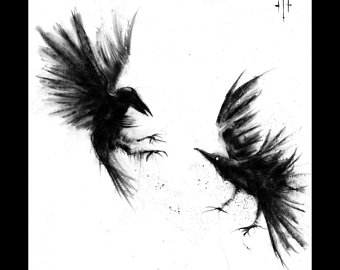 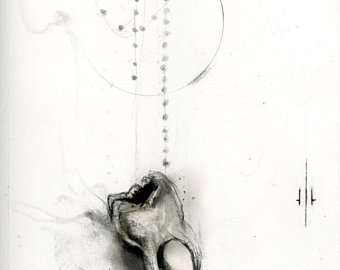 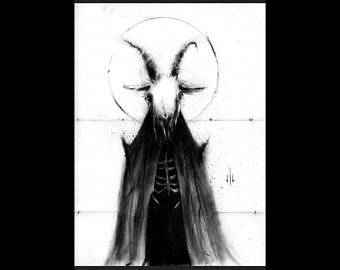 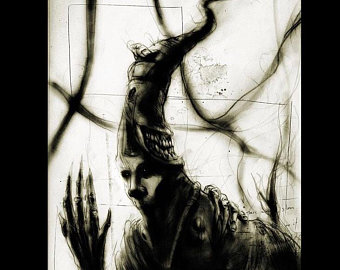 RM: Tell me about you: What was the definitive moment you decided you were going to make this a career? Was it a certain film, book, or just good old-fashioned artistic gravitation that many lovers of the creepy and macabre seem to possess that served as your push?
AS: I’ve been drawing since as far back as I can remember.  I used to try to recreate the comic books my parents would buy me near the checkouts at grocery stores.  My brother and I would draw these elaborate battle scenes of stick figures in these big sketchbooks we had.  Since it’s always been something I’ve enjoyed to do, I guess that it just made sense to me to make this into a career.  I’d say I started professionally around 2013. The whole creepy aesthetic stems from the fact that I wasn’t really allowed to watch horror films when I was young, so I would sneak them from the video store, or stay up late and try to catch the edited-for-TV cuts on whatever channel aired them, haha.  Immersing myself in the macabre, whether it be books or film, really helped to shape my style and approach.

RM: Your Death of the English Language series is a brilliant mash-up of adorable and creepy in relation to all the new(ish) hip slang terms. What inspired you to create it?
AS: I think that I was bothered by having to Urban Dictionary search so many of these terms and acronyms, haha.  I remember telling someone that it must be insane to be the person who, either intentionally or accidentally, came up with one of these goofy terms that almost overnight becomes part of the everyday lexicon.  Of course, that is the beauty of the written or spoken word; it is constantly evolving, whether we like it or not. I thought it would be a creepily cute idea to incorporate the character of Death into the phrase “Death of the English Language,” and started with my very first grim reaper, “Brb.”  I didn’t think anyone else would get a kick out of it, but I started receiving so many comments or messages about how cute and hilarious my characters were, or (if it were an English teacher commenting) how they absolutely need to introduce this idea to their students to remind them that it’s actually ok to laugh out loud instead of simply replying, “LOL!”

RM: When will you be restocking that series in your Etsy shop with prints and pins of cute little hipster Death?
AS: Hopefully within the next month!  I do have some sticker packs available in my Etsy shop.  A special thank you to everyone who has purchased one! I have little voting polls on my Instagram page to help decide which character will be the next featured enamel pin, so be on the lookout! I will also be doing another batch of t-shirts and hoodies.

RM: While the Death of the English Language gallery leans more to the “spoopy” side, the Hell is Here series is substantially darker and thought-provoking. What message do you want your admirers to see or think about when viewing these pieces?
AS: I used to do a bunch of tour flyers or album art for bands, mostly metal or punk, and I had a few unused ideas lying around my workspace.  I reworked some and decided to lump them all together in an “album-art-for-a-metal-band-that-never-existed” sort of way. However, when I placed them all side by side I saw this recurring disparity between simplistic and overworked, elegance and horrific.  They became more witchy and occult-like to me and said much more than my aforementioned goofy metal band statement. I decided to title the series something ambiguous. I wanted the name “Hell is Here” to raise a discussion, whatever it might be. The more inquiries I get on those pieces, the more “this one is really satanic” or “I love how freeing this painting makes me feel,” the more I know this series is doing its job.  Some of the unreleased ones are going to have a cryptic message or passage hidden in them.

RM: What other projects do you have in the works that you care to discuss?
AS: I often tend to take on so many that I need to slow down!  I’ll be showing at both Sinister Creature Con (Sacramento) and Designer Con (Anaheim) this year, and I’ll have exclusive product for both, including originals, sketchbooks, pins, t-shirts, and stickers.  Maybe a toy or plush doll of the “Death of the English Language” characters? I also do a monthly scary story episode on my Instagram page called “TERROR-ible Thursdays.”  The first Thursday of every month I’ll post a horror short and illustration in my Instagram stories.  While not all are narrated, most are interactive by way of chilling music and/or sound effects. It used to be I was confined to the 15-second story clip restrictions, so an entire story was stretched out between like 50 clips.   But with the advent of IGTV, I now have 10 minutes to work with! These are only up for 24 hours, kind of like an old radio program, so you have to tune in or miss out! (*Cough* These may also be available in limited edition book form at my Sinister Creature Con/Designer Con booths. *Cough*)