The wait is over: the world premiere of Scott Cooper‘s much-anticipated horror effort, ANTLERS will be hosted by Beyond Fest which has chosen the film as its closing night selection.

In an isolated Oregon town, a middle-school teacher (Keri Russell) and her sheriff brother (Jesse Plemons) become embroiled with her enigmatic student (Jeremy T. Thomas) whose dark secrets lead to terrifying encounters with a legendary ancestral creature who came before them. ANTLERS is written by C. Henry Chaisson (Servant) & Nick Antosca (The Act) and Cooper, based upon the short story The Quiet Boy by Antosca.

Presented in partnership with the American Cinematheque, the premiere will launch a series of events leading up to the October 29th theatrical release of the film, which includes subsequent screenings with festivals across the globe, including Fantastic Fest, Sitges, Telluride, and the Chicago International Film Festival. In addition, Cooper has been tapped to host a horror retrospective in conjunction with Beyond Fest and the American Cinematheque this fall. 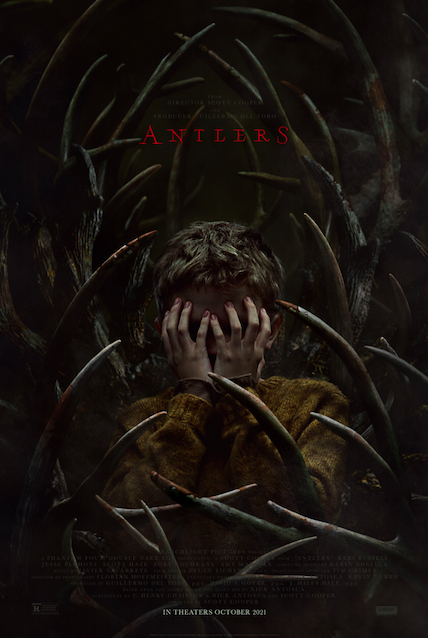 “ANTLERS features intense scares, a spectacular creature, riveting storytelling, accomplished performances, and the thrilling vision of Scott Cooper at the helm,” said Beyond Fest Founder Christian Parkes. “We know our audiences will journey into the heart of the monster for this artful nail-biter. It’s an honor for us and the American Cinematheque to welcome Scott back, as we have celebrated his genre-spanning films from Crazy Heart to Out of the Furnace over the years.”

ANTLERS will premiere at Beyond Fest on October 11th, 2021. For more information, please visit the event website.