Back in 2015, writer/director Jason Krawczyk became recognized on the genre scene for HE NEVER DIED. A synthesis of dark humor and cannibalistic horror, the film—while entertaining on its own meaty merits—was truly anchored by the legendary Henry Rollins and his dour, yet lovable performance as Jack. HE NEVER DIED didn’t necessitate a sequel (especially one that doesn’t bring back its best aspect), but here we are.

Written by Jason Krawczyk but now directed by relative newcomer Audrey Cummings, SHE NEVER DIED feels less like a successor to the first installment and more a reimagining of the principle film’s protagonist, secondary characters, locations and themes. Just like Jack, the heroine (Lacey) this time around is still a morose, diner-dwelling individual with a lack of empathy toward anyone. She’s reluctant to do anything other than exist until happenstance has her finally form a human bond between an elderly cop (Peter MacNeill) and a young woman (Kiana Madeira) who’s made some rather poor life choices. With her newfound (albeit reluctant) acceptance to help others, She realizes that there might still be bigger things to fight for rather than a day-to-day ritual consisting solely of survival. So yes, pretty much the first film—again.

Beyond the gender swap, an adjustment to the criminal organization and an unsuccessful denouement hoping to extend the universe into an MCU of biblical proportions, there just isn’t a lot of new content to justify SHE NEVER DIED as any sort of sequel when its characteristics are far more in line with that of a remake. In that regard, I personally felt the film bland, both narratively and visually. The story isn’t surprising because we saw the same journey with Jack. Housing the majority of the film in similar warehouses, alleys and general exterior locations drained of vibrance (and lacking the precursor’s occasional neon-pop of noir-ish lighting) doesn’t dissuade the feeling of Deja-vu. Sadly, even the cathartic violence is sadly lacking (one key baddie being killed offscreen) and doesn’t carry the same weight as the first time around. 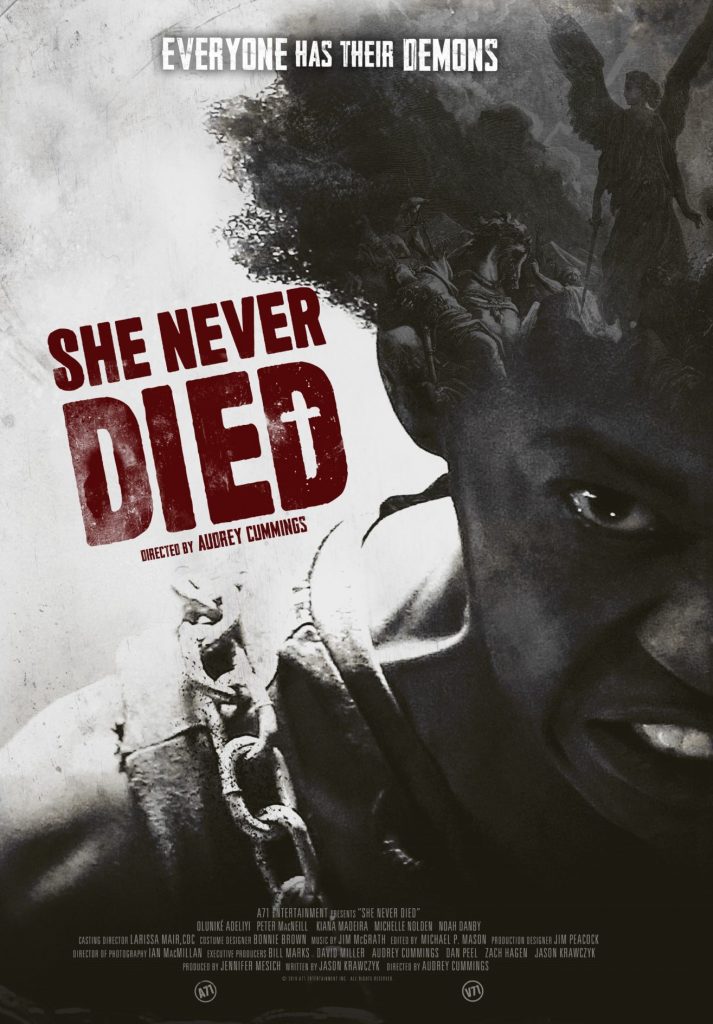 Even with the plot as light as it is on ingenuity, I found it strange that certain elements of the script were inconsistent. For one, the damage Lacey is able to tolerate fluctuates. She can take a point-blank bullet through the head (blasting her brains out the other side) and barely flinch, but three swings from a bat does her in for hours. Lacey camps outside ol’ snuff HQ and after storming inside in pursuit of “the guy with the rings”, abandons the objective after offing one of his goons. Why? Why didn’t she just continue her siege? In relation to this, do the antagonists ever look outside of their own compound? If Lacey continually sleeps right around the corner from their main entry (and is on their shit list), wouldn’t they just go outside at some point and see her sleeping? Would make capture far easier. During the film’s introduction, a young woman is pursued by a man. She flees a well-lit main street in favor of . . . a dark alley? Why? So and so forth.

If there’s a positive comparison I can make, it’s that like Henry Rollins’ performance in HE NEVER DIED, Olunike Adeliyi’s performance herein is both sympathetic and strong. While replicating the nuances of Rollins would be damn near impossible (and foolish), I was pleasantly surprised with just how well Olunike conveys Lacey’s hurt—both physically and verbally. She has little dialogue that isn’t simple responses to those questioning, but every line is delivered with sincere purpose. I just wish she had a better template to work from; a sequel that truly delivered something unique and made better use of her acting. Alongside her, the villainous duo running the monopoly of malice are an interesting pair of sociopaths, but Terrance (Noah Dalton Danby)—a sugar-obsessed torturer with a penchant for comedically well-timed rhetoric—is the more entertaining of the two and gives each scene he’s in a much-needed boost of macabre enthusiasm.

SHE NEVER DIED is a vast improvement over Cumming’s previous efforts (like TORMENTED) and shows her abilities as a director are intensifying, but the entire endeavor hasn’t eased my suspicion as to the necessity for a HE NEVER DIED benefactor(s). It barely offers any alterations (beyond an admittedly compelling Olunike) to truly justify its existence within the canon, and the only slivers of “new” mythology are cryptically displayed in the final two minutes of the picture so as to set up for a potential third entry (or series if rumors serve correct). Fittingly, SHE NEVER DIED resides in a strange purgatorial state wherein fans of the original might feel slighted by the ingeminate material, but newcomers might enjoy it as a straight vigilante flick (yet remain naïve to the religious context previously established). SHE NEVER DIED isn’t a bad film by any means but it’s not the experience a sequel (for me) should be. One can make a handful of cosmetic changes, but it can only go so far to distract from a lack of development inward. Having said all of that, I still think it’s worth a viewing for the truly inspired performances alone (and hell, the bat scene mentioned above is pretty great too).