Writer/Director Micheal Dougherty knows monsters. Whether it’s his cult classic Halloween perennial, TRICK’R TREAT, or his “Anti-Claus” Christmas carol, KRAMPUS, Dougherty has long been a prominent and vocal cheerleader for all things monstrous. So when word got out that he would be expanding The Monsterverse (the ongoing collaboration between Toho, Legendary and Warner Brothers) with the sequel to Gareth Edward’s GODZILLA (2014), there was little surprise but plenty of joy. GODZILLA: KING OF THE MONSTERS brought in Toho’s heavyweights (Rodan, Mothra and King Ghidorah) as well as continued to expand the presence of The Monarch Organization, the government-funded watchdogs observing and studying the return of the monstrous “Titans” to the world of man.

Simply put, it’s a blast. A perfect tribute to the Toho legacy, while putting a new spin on these iconic monsters that reflects the times. (It also features a climactic showdown that had me grinning and clapping in my seat).

In advance of the film’s release on DVD/Blu-Ray, I got the chance to talk with Dougherty about all things kaiju, as well as carrying the weight of the franchise (and its very heavy players) on his back. 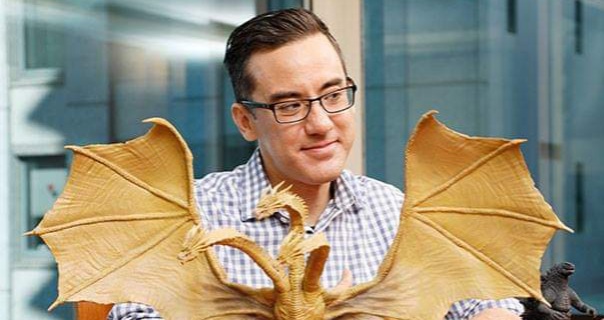 You’ve been brought onboard to steer The Monsterverse through its next course, and you’ve got the full Big Four (Godzilla, Rodan, Mothra and Ghidorah ) on deck. How do you walk that line between reverence for the source material & adding your own embellishments to this universe?
Well, something I love about the source material is that it’s constantly evolving, much like the creatures themselves. Every Godzilla film is unique in its own way, from the monster designs, to the story, to the tone, so I think adding your own embellishments is part of a very long tradition. The fact that Godzilla’s design has changed in every film is proof of that. I like to think that he’s almost evolution in the flesh, which ties into the larger themes of the series, so I felt compelled to embellish where it felt needed. At the same time, you do have to honor what came before and respect the original intent of the character and his film series, which meant embracing certain aspects that have been established for decades: his roar, the theme music, and even a certain fantastical style of storytelling that I think is unique to Godzilla films. It’s like making a pizza. You can always add your own unique toppings, but without certain key base ingredients it’s just not pizza.

On top of the Big Four, KOTM introduces new Titans created specifically for this film? What was the process in creating them & making them a fit for The Monsterverse? Were Toho Studios involved in the approval process at all?
Toho was involved with the designs of the Big Four: Gozilla, Mothra, Rodan and King Ghidorah, but I had total freedom with the designs of the new titans. Originally I hoped to use other monsters from the Tohoverse, like Anguirus, Gigan, or Biollante, but every single Toho monster comes with a price tag — something we didn’t have the budget for. So instead of moping about it I decided to embrace the opportunity and add new titans to the gallery: Behemoth, a sort of wooly ice age titan; Scylla, an ancient armored cephalopod based on Greek myths; and Methuselah, a hybrid monster that is part animal, plant, and rock. I also brought back a female MUTO only because I loved Gareth’s designs from the previous film and like the idea that other members of that species might have survived. So as much as I would have loved to bring other Toho beasts into the curtain call, designing original monsters was a ton of fun. I spent months with our VFX crew looking at dozens of different sketches and coming up with backstories for each of the animals — talking about how they moved, what their natural environments might be, how they would hunt or fight etc. But the best part has to be seeing how much the fans embraced the new titans, creating posters for them, sharing fan art on social media, etc. I’m especially glad that Behemoth seems to be everyone’s favorite because he’s definitely mine. Mammalian kaiju are so rare!

What can we expect to see on the impending blu-ray release, as far as features and scenes that didn’t make the theatrical cut?
I think there are about fifteen to twenty minutes of deleted scenes. Not a lot but enough to spark some curiosity and conversation. There’s a commentary track with myself, my co-writer and producer Zach Shields, and O’Shea Jackson Jr — that was a ton of fun to record because O’Shea is a giant Godzilla nerd. They’ve also loaded it up with a ton of behind the scenes documentaries and galleries focused on different aspects — visual effects, creature design, the score, etc.

As a lifelong Godzilla fan, why do you think the character’s endured for so long?
I think he’s endured for a few different reasons. Obviously, there’s the basic primal love of seeing two giant monsters beating the crap out of each other, but chalking it up to that alone is overly simplistic and shallow. If that was true I think other giant monsters would be just as popular. More importantly I think Godzilla has become iconic because he’s actually surprisingly complicated and multi-layered — even subversive. He has something to say if you’re willing to listen. The Japanese weren’t just making a big dumb monster movie, they were creating an allegory about the dangers of mankind messing with Mother Nature after dropping two atomic bombs. Sure you might come for the fights and it’ll tickle your primitive lizard brain just fine, but hopefully some part of your smarter subconscious mind is digesting Godzilla’s message. He’s truly mythic in that sense.

If you had to name one, which of the monsters in KOTM was your favourite to work with/develop?
That’s a good question and I think my answer probably changes daily. They were all a ton of fun and challenging in their own unique way, but I’d have to say King Ghidorah was my favorite. Besides the fact that he’s Godzilla’s lifelong classic antagonist, I’m a huge fan of dragons in general so it was a thrill to be the first American director to translate such an iconic character for a modern Godzilla film. My team and I did everything we could to make sure he was terrifying, from his design and performance to his very particular roars and screeches, no stone was left unturned to make sure King Ghidorah lived up to what fans expect from the character.

Okay, so you get another swing at bat with this universe. Warner Bros and Toho give you the greenlight to relaunch any of their as-yet untouched kaiju – who do you go with?
The Gargantuas. Those boys are so weird and freaky yet strangely sympathetic. Other than Kong I’m not sure if there are any other giant primates with that special mix of frightening yet human. I still get the chills thinking about THAT ONE SCENE (kaiju fans know the one I’m talking about). Watching that as a kid messed me up in all the right ways. Right behind them would be Biollante, but for similar reasons. She’s such a tragic beast. A hybrid of Godzilla, human, and plant DNA created by a mad scientist grieving for his dead daughter. Biollante didn’t ask to be born and she reacts to our hostile world accordingly. She’s like a kaiju sized Frankenstein creature that serves as a living warning about screwing with monster DNA.

With GODZILLA under your belt now, what’s next for you?
First, a vacation. A long slow boring vacation with as little human interaction or internet access as possible. After that my dance card is already filled with more monsters. I can’t say much about them yet, but with any luck I’ll be bringing more monsters to life, both familiar and new, both big and small.

GODZILLA: KING OF THE MONSTERS is now available on digital platforms. The Blu-Ray releases on August 27th, 2019.