BJ McDonnell, who helmed the movie portion of the combo release SLAYER: THE REPENTLESS KILLOGY (reviewed here), has a lot of horror street cred. In addition to his Steadicam credits on high-profile genre blockbusters (like Marvel’s ANT-MAN and AVENGERS: AGE OF ULTRON), he served behind the camera on A NIGHTMARE ON ELM STREET’s remake, the CONJURING universe and AMERICAN HORROR STORY season eight among others, as well as with cult directors like Adam Green, Joe Dante, William Friedkin and Rob Zombie. He has built a strong relationship with the latter ever since THE DEVIL’S REJECTS, and has worked on both his HALLOWEENs, THE LORDS OF SALEM and 31. And he also directed HATCHET III. RUE MORGUE recently got ahold of McDonnell on a Saturday (he was in the middle of a shoot, as 2nd-unit director on THE COLLECTOR’s third installment), to chat about his time in jail (!) with the mighty Slayer.

Can you remember the very first time you heard a Slayer song?

That was in high school. I’ll never forget: My buddy Dave Law, a surfer dude—I grew up in Florida—was always coming into our homeroom,in the morning, and he did this weird little thing where he would sing a Slayer song and the guitar riff with his tongue, he’d be like [singing a Slayer solo as a kid would]. He was always doing this stuff, and I was like, “What are you doing?” and he’d answer, “It’s Slayer, man, you gotta check ’em out!” One day we went surfing together, and he brought the SEASONS IN THE ABYSS CD, we popped it in the car [player], and there it was. From then on, I was like, “These guys are fuckin’ amazing.” It was probably 1991, around there. 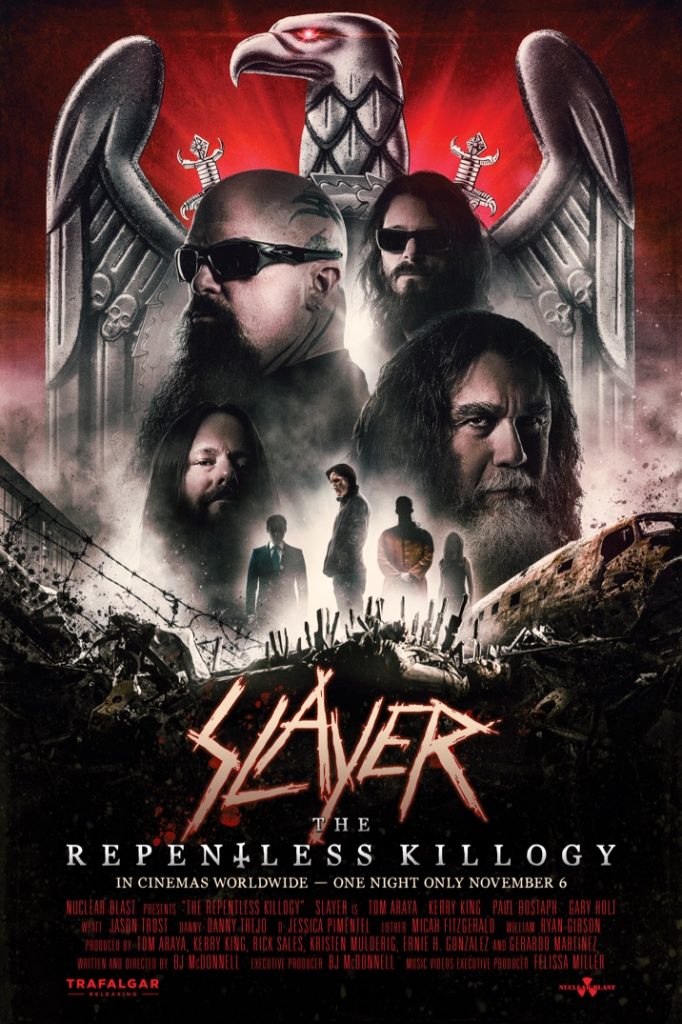 How did you get involved with the band?

I met with Gerardo Martinez at Nuclear Blast Records. The REPENTLESS album was about to come out and they were interviewing horror directors. I came in and pitched to him: “The albums are fantastic, but I haven’t yet seen a Slayer video that says ‘Slayer’ to me. MTV is kind of not that video source anymore, where censorship was a big issue; you’ve got YouTube and all these other platforms, so let’s make a Slayer video a Slayer video.” Gerardo said, “Awesome,” so I wrote two pitches, the guys read it and chose one—the one for “Repentless”—and that was it.

It wasn’t a trilogy at first. It was a basic, very straightforward video that told a simple story about a guy who’s in jail; to get to a different cell block, he starts a riot to get the head of [the character played by] Derek Mears. With this one, I knew we could get all the people we knew—friends, acquaintances, people I’ve worked with on other projects—and bring everybody together as a family. My wife [Adrienne Lynn] does makeup effects, my good friend Tony Gardner [special makeup creator on the ZOMBIELAND films and many others] owns Alterian, Inc., and I’ve worked with him on a bunch of movies. It was basically like, let’s make an awesome bloody gorefest riot video that will make everyone go “Whoooooaaaa!” I wanted to come out of the gate hot.

How much input did Slayer’s founders—also producers—Kerry King and Tom Araya have?

They actually gave me the freedom to do what I wanted. They obviously approved the pitch. I know Kerry King read the other one, which was a crazy cannibal idea out in the desert. It would have been insane if we could have done that one; it was bikers, cannibals, cultists, it was mayhem—but it would have cost a fortune to make that video. Anyway, the [Slayer] guys didn’t really have much input, other than the fact that they were stoked to actually do something like this. We shot all the riot stuff on the first day, all the blood and gore and the whole storyline, and the Slayer guys showed up at the prison the next day and we did the performance stuff with them.

They were just the nicest guys. I mean, you get intimidated when you haven’t met a band like them. You’re like, “I wonder how they’re gonna be…” I couldn’t ask for a better band to work with. They were ready to jump in and do it. It was hot as hell; it was scorching outside and we didn’t have a lot of time. But they were all game, all for it. When the video was cut together, I sent it for approval, and they were stoked! There were no changes, and that was awesome. 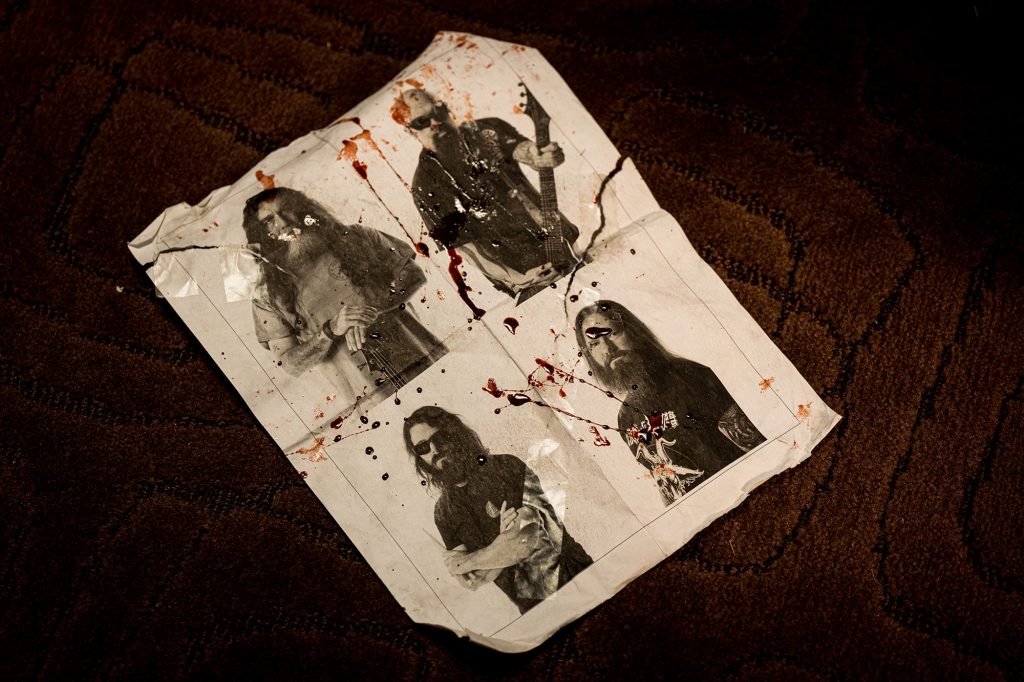 Were the Slayer guys hard to direct, or did they just do their thing—you know, being Slayer?

Oh, I directed them a bit. I wanted them to be Slayer, ’cause this was their video. I didn’t want to change who they are; I just wanted them to know the situation that was happening, with all the prison inmates who were coming around them and all the guards stopping ’em. Actually, Gary Holt went, “What if I grab this guard and storm him to the ground?” and I said, “That’s perfect, let’s do it!” So we shot that, and it got incorporated into that bit where the guys sorta break free and are basically moshing all around Slayer, while these cops are getting beat up. That little nickel right there, I’m giving to Gary Holt; that was his input. So that video came out great; everything just worked.

How did that first “Repentless” video became part of a trilogy?

People were super-pumped about the video, Slayer was really happy with it when it came out, it was very well-received, and I was super-proud of it. I got a call from Gerardo, who was like, “I’ve got this idea: How about we do two more videos and make it a trilogy, with a pre-story and a post-story?” So I came home, sat down and developed the whole narrative from the “Repentless” pitch I had written, in the style of telling a story through expressions where you don’t have dialogue, ’cause it’s music videos. I wanted to do an action one, which is the “You Against You” video, and to make the last video [“Pride and Prejudice”] more of a dark storyline to wrap everything up. I wanted to make each video in a different style. I sat down and wrote those ideas, sent them in, everybody loved them, they were greenlighted and away we went.

I got a bunch of my stunts friends to choreograph everything for the “You Against You” video; we had it all rehearsed before the shoot. My buddy Don Lee—who has done tons of movies—put all that stuff together with me and rocked it out. We got really inspired by JOHN WICK for that one.

The cast of THE REPENTLESS KILLOGY is out of this world—a horror-fan wet dream, really. What was your process in assembling the actors?

It was a matter of just calling up friends. It was basically, “Hey, guys, I got this Slayer video, what are you doing, there’s gonna be a lot of brutality and gore,” and everybody was super into it. A lot of the people were definitely Slayer fans. [Danny] Trejo, I had worked with before on THE DEVIL’S REJECTS. Same with Tyler [Mane], but it was really on HALLOWEEN that I really got to know Tyler, and he loves Slayer; he was stoked about it. Sean Whalen too, whom I’ve known for a while, a good friend of mine. I knew Caroline [Williams] really well from directing her in HATCHET III. Bill Moseley, again, is from that Rob Zombie camp; I’ve worked with him a few times. And actually, he’s a Slayer fan too; he was excited to do the project.

It was just nice to have all those people on board. Once they saw the “Repentless” video, people were like, “Oh, all right, this is serious.” My buddy Jorma Taccone from The Lonely Island told me, “If you do another Slayer video, I wanna get killed in it.” And sure enough, when I got to shoot “You Against You,” he drove down to the desert to be part of it. 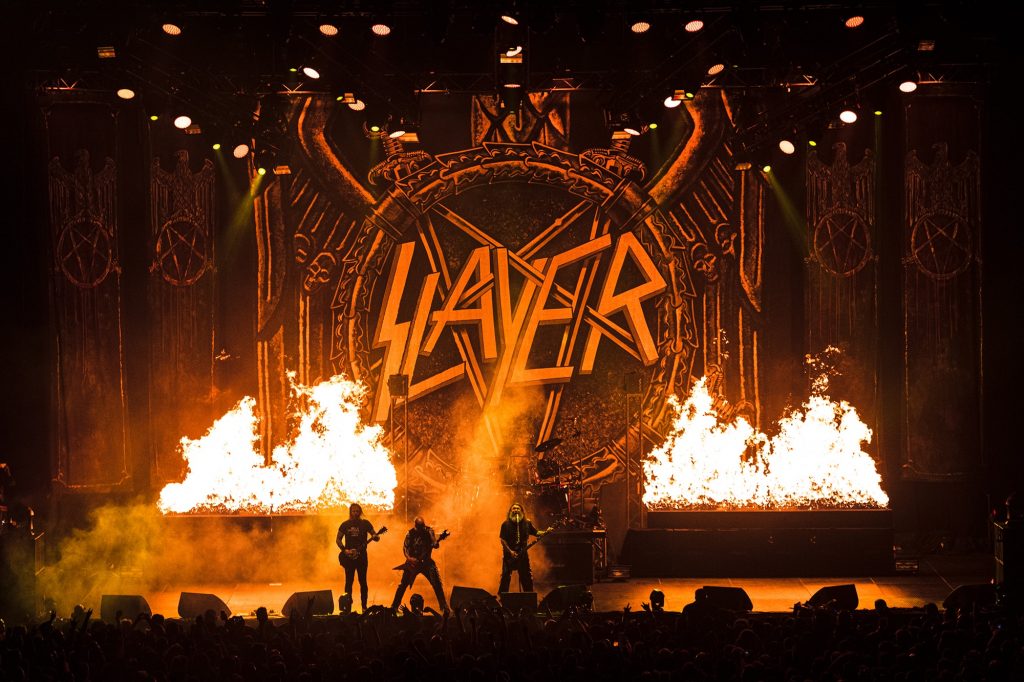 You also got to shoot backstage at a Slayer show for the very ending of REPENTLESS KILLOGY.

This whole KILLOGY thing, the mastermind behind it all is really Gerardo at Nuclear Blast. He’s the one who has been pushing for all this, coming up with everything, collaborating…he’s been nothing but awesome. He said, “We want to do this Blu-ray, we want to have kind of a final story, and we want to incorporate the [2017 Los Angeles Forum] live show.” So I wrote KILLOGY, which brings all the videos together in order, and has a final story at the very end. Which was crazy, ’cause I basically wrote this whole thing not knowing Slayer was gonna call it quits! After we wrapped up production on it, literally two weeks later, all of a sudden, they announced their farewell tour. So I got to direct all the narrative stuff, and we had Wayne Isham come in to direct just the live show, all the cameras shooting the band. Directing a live show is not an easy task when you have, like, 18 cameras. It was very cool to work with Wayne; I’ve been a fan of his, growing up with all the videos he’s done in the past [for The Rolling Stones, Pink Floyd, Ozzy Osbourne, Judas Priest, Metallica, Mötley Crüe, Dokken, Bon Jovi, Def Leppard…].

[Bonus question] Anything else to add?

What means the most to me is that people—the true metalheads, horror fans and even action fans—can watch this and truly appreciate what we did. Without Slayer, we wouldn’t have any of this. It was just a pleasure to work with those guys. Having the opportunity to be a part of their legacy, a little touch of what that was, is an honor for me, and the crew and the actors. We were very grateful to be a part of it.