“Spiral” Marks the Return of “Saw” (Kind Of)

One of those audience members was comedian Chris Rock. He loved the Saw films, which is what partly prompted him to sign on to not only star in and executive-produce SPIRAL (a Saw film without Jigsaw/John Kramer) but to insert some of his signature humour via his own pass at the script, which is credited to Josh Stolberg and Pete Goldfinger, the writers of the 2017’s Jigsaw, the last Saw franchise film. The other reason was the return of director Darren Lynn Bousman who helmed Saw II, III, and IV – three of the most successful films in the series, both financially and stylistically.So how successful is this film from, according to the marketing materials, ‘the book of Saw’? Let’s just say that, yes, there will be blood but there will also be character and continuity – welcome changes from the last few Saw films. 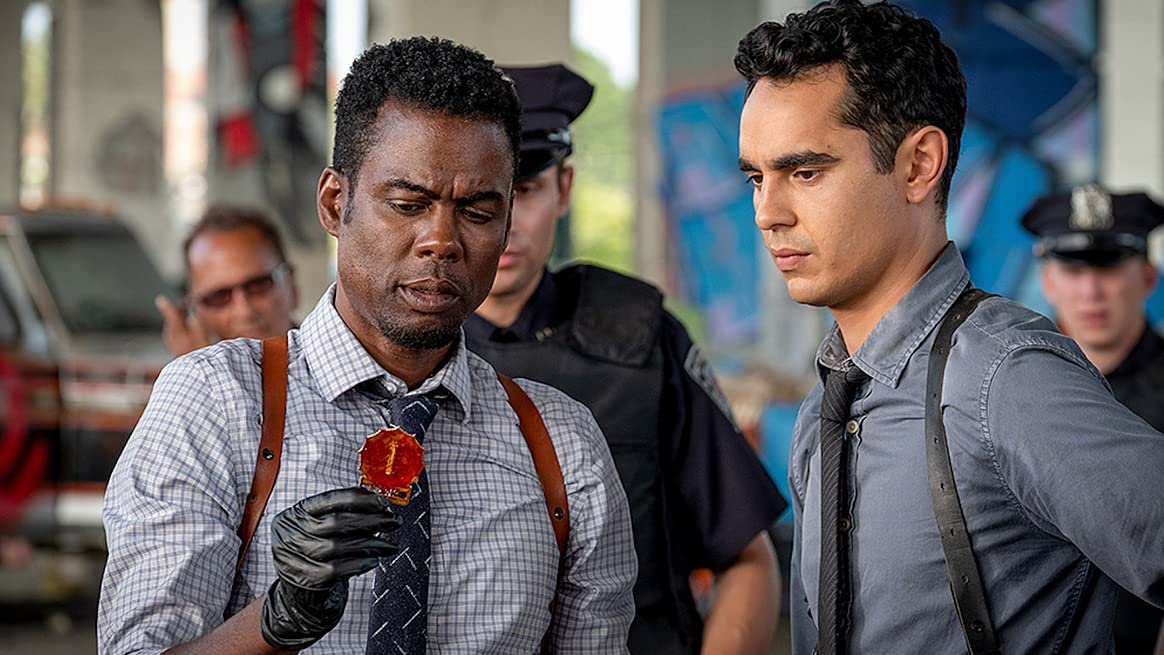 Rock stars as Detective Zeke Banks, a straight-arrow cop in an unnamed metropolis whose career was derailed when he put his corrupt partner behind bars. Unwilling to work with the dirty cops who fill his precinct, he bristles at being partnered with William Schenk (Max Minghella), an eager rookie who admires Banks’ integrity. Their partnership gets tested right away when a mysterious killer starts offing cops in the style of John Kramer, a.k.a. Jigsaw. (SPIRAL exists in a world where the Jigsaw killings happened but Kramer is long dead.) Banks is determined to find this Jigsaw copycat, even if it means saving the very cops whose corruption led to his miserable life on the force.

Bousman spills plenty of blood, as he promised in my interview with him in a recent issue of Rue Morgue, but his emphasis is more on Banks’ dilemma – saving those who don’t arguably deserve it – and the responsibility the police have to the citizenry they serve (a timely topic in the wake of Derek Chauvin’s conviction for the murder of George Floyd). This is a welcome change, although his obvious reverence for Rock means that the Everybody Loves Chris actor rarely gets reigned in. Indeed, while it’s often a pleasure to see comedians take on dramatic roles (think Jim Carrey in Eternal Sunshine of the Spotless Mind), Rock seems to think that shouting and swearing is going to win him an Oscar.

Another welcome by-product of Lionsgate’s decision to move away from the increasingly circuitous logic of the Saw films is the relative straightforwardness of Stolberg and Goldfinger’s script. The mystery of who is killing these cops is solved without an overreliance on flashbacks or increasingly tenuous connections to the Saw mythology (If you want your head to explode, Google ‘Saw timeline’). Bousman nicely recalls the style of his previous films – think a green/yellow colour palette and sped-up action during moments of character anxiety – while creating a character-driven thriller you want to watch to the end.

And, yes, there is room for more blood to be spilled in a sequel.

SPIRAL: FROM THE BOOK OF SAW is in theaters now.