“SPREE” is a Fun, Blood-Soaked Ride through a Serial Killer’s Socials

Okay, so hear me out.

You should definitely watch SPREE.

I know what you’re probably thinking, and it’s probably along the lines of what I was thinking when I first queued up SPREE; oh boy, another superficial, overdone, on-the-nose critique of social media from people who don’t understand (and don’t want to understand) the world of new media. And yes, that’s at least half of what SPREE tries to be. The film’s first half in particular has Kurt (Joe Keery), the main character, repeating sentiments that come straight from boomer memes, like “you’re creating a brand” and “if you’re not documenting yourself, it’s simple: you just don’t exist.” Kurt represents himself as more of a caricature than a character early on, documenting every second of his life, surrounding himself with the paraphernalia associated with successful influencers and millennials in general (healing crystal hanging from his rearview mirror, vaping, poorly made brand stickers, and popular apparel after he makes a particular kill), and taking any opportunity to try and get more successful people to tag him. Followers are (evidently) the most important thing in the world to Kurt, and his entire worldview, his entire CHARACTER, is built upon the idea that if you aren’t somebody, you’re nobody. I’m not going to lie to you, it gets annoying fast, especially if you take it as the film’s general perspective on millennials. 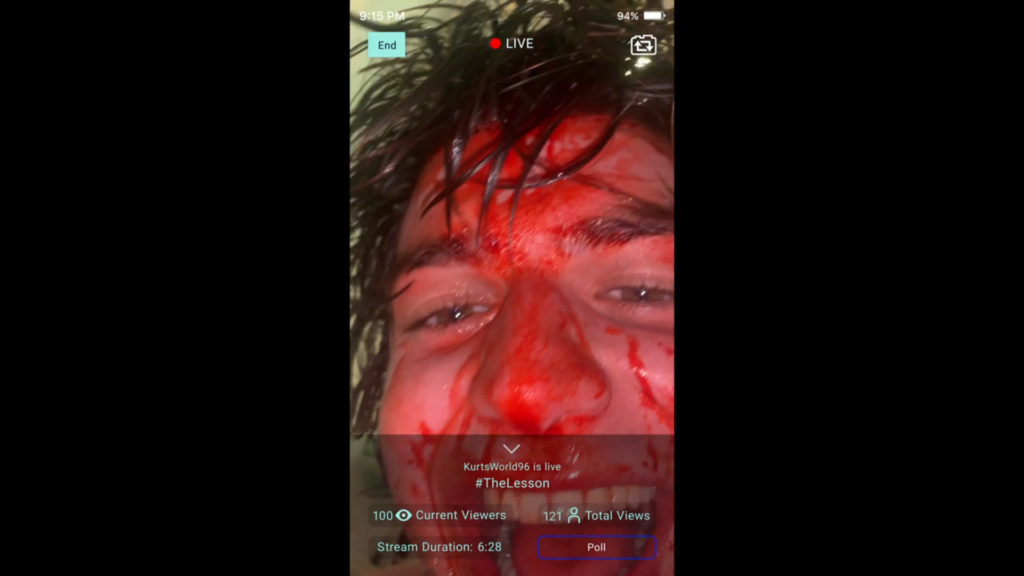 But, all that being said, the film goes on to establish Kurt as a character in his own right, a believable, warped serial killer whose journey from loser to lunatic to legitimate “influencer” feels real and terrifying. He represents himself as a caricature because he’s more like an automaton than a real person, emulating people who are successful to convince himself that his life has meaning, has value; and as the film goes on, we see him reckon with the forces that conceived him (his Youtube connection, Bobby, and his parents), grapple with his worldview (he actually physically shuts down after someone more successful lampoons social media, which is fantastic), and use social media and rideshare company systems (which are unprepared for a threat like him) to evade the law and continue his… well… spree. By halfway through the second act, after Kurt snaps and kills someone close to him, gaining more followers in the bargain… well, I wasn’t laughing anymore. Kurt’s story finally felt like it had some gravitas, finally felt like it was a real, very disturbed kid carrying out real, increasingly fucked up murders. And it only gets darker and, well, more batshit crazy as the film goes on. Especially considering how well the writers expand the world here.

At times, the ways in which the writers portray the characters surrounding Kurt feel more at home in a late 2010’s South Park episode. Some of Kurt’s early customers are deliberately and grossly unlikable in a way that feels like caricature. Take, for instance, Mario, who complains that he needs to fuck some “insert misogynistic slur here” and tells one of the main characters that she needs to smile more. Or the white supremacist, although let’s be real: what happens to him is fun to watch. Especially at the film’s outset, you feel as if you could almost root for Kurt, like the writers are going to somehow work him in as some kind of anti-hero. But then the film’s turning point hits, and its scope expands. His kills become random, wild, and singularly self-serving, and several of the characters that populate the world of the movie become real in increasingly disturbing ways. Like Jessie’s (Sasheer Zamata) manager Miles, (Kyle Mooney) who gets her drunk and almost takes her back to his place to date-rape her, even announcing to his “fans” that he plans on livestreaming the whole thing. Or the several admirers and even copycats Kurt picks up before and after his fatal stream ends. At a certain point, the film’s satirical lens drops off and it simply represents the worst of us; just watch the comment section on Kurt’s stream light up and tell me it’s not an accurate representation of what we would see, well, anywhere else.

Other things worth noting: the whole movie happens over one livestream, comprised of footage from Kurt and other characters’ phones, traffic cams, webcams and the like, and is later revealed to be a series of clips assembled by an admirer. This gives the director a LOT of leeway as far as how certain sequences are filmed, and much like other “tech horror” films like Host and the Unfriended movies, the director takes full advantage. Joe Keery does an excellent job as Kurt, making me eager to see what else he can do minus a mullet and the bat, and SNL’s Sasheer Zamata makes her mark as the film’s final girl, evading and demolishing a number of monsters over the film’s runtime.

In short, I think SPREE’s second half saved it for me. I had a lot of fun, and if you don’t take it too seriously at the outset and let it take you for a ride, you just might too. I’m giving it an 8.

Keep an eye out: next week, we cover Netflix’s THE DEVIL ALL THE TIME