“HELL NIGHT” is a Serviceable (if Predictable) 80’s Slasher

Sometimes you just want to watch something where you know what’s coming, you know? Like the kind of movie where you’ll get monsters, a spooky setting, and get to comfortably watch a couple of dumbass kids get murdered (how DARE they drink and make out before marriage, for shame) behind a massive bowl of popcorn and (ironically) the tallest beer you can find. HELL NIGHT is that kind of movie, for better and for worse, a movie that aims to deliver schlocky fun without all the mess of social commentary, but that can’t help but say something anyways.

HELL NIGHT is essentially a hazing ritual that new members of a Greek fraternity and their sister sorority go through, with new recruits spending the night in the local haunted house. The Garth house, the fraternity leader Peter (Kevin Brophy) says, was the site of a terrible tragedy where a rich man moved in with his wife, who bore him a bunch of deformed children that he was ashamed of. Cue the Amityville-style family massacre, ending with a hanging and the Garth patriarch’s 14-year-old son being spared after being forced to watch the whole thing. The house has been empty since, Peter claims, save for the surviving son, who still stalks the halls of the old manor. Marti (Linda Blair), Jeff (Peter Barton), Seth (Vincent Van Patton) and Denise (Suki Goodwin) are our batch of new recruits, and while Seth and Denise have only one thing on the mind (it’s sex), Marti and Jeff find themselves uneasy and somewhat stupefied by the Greek tradition. As Peter and his cronies prep a series of pranks for our unsuspecting main cast, they don’t realize that they themselves are being stalked… and HELL NIGHT won’t be a good time for anyone this year.

“HELL NIGHT is the kind of movie you watch when you want something safe and schlocky, predictable but fun.”

The first thing I want to say about this film is that it’s okay. It’s pretty standard slasher fare, and if I had to sum it up, I would say it’s somewhere between Castle Freak and Black Christmas. The film has a slow wind-up, and the first third of it is spent introducing us to a cast of (mostly unlikeable, but deliberately so) characters and watching Peter and Scott set up a haunted house of their own for the pledges. When it picks up, it’s pretty typical slasher fare; the kids get picked off one by one, starting with the shitty Greek Life kids, and ending with our main cast, the exposure of “the secret of the house,” and an almost rescue scene that goes very, very badly. Saying that its typical slasher fare isn’t meant to disparage it, however: I enjoyed the film for the most part for its campiness and excellent setting, which make the film for me, as well as the design of the monster. The two actors who played the monster(s) went uncredited, but I did my best to include what we think MAY be their names up top; I didn’t want work like that to go unrecognized. I will say that the film was very predictable; if you’ve seen any slasher movie in your lifetime, you know exactly how this is going to go and what they’ll find under the house, and even the film’s one seeming departure from the typical slasher tropes gets wound back into, well, exactly what you will expect. That doesn’t make it bad by any means, but it equates to comfort food for me, something I would watch when I want safe and schlocky. 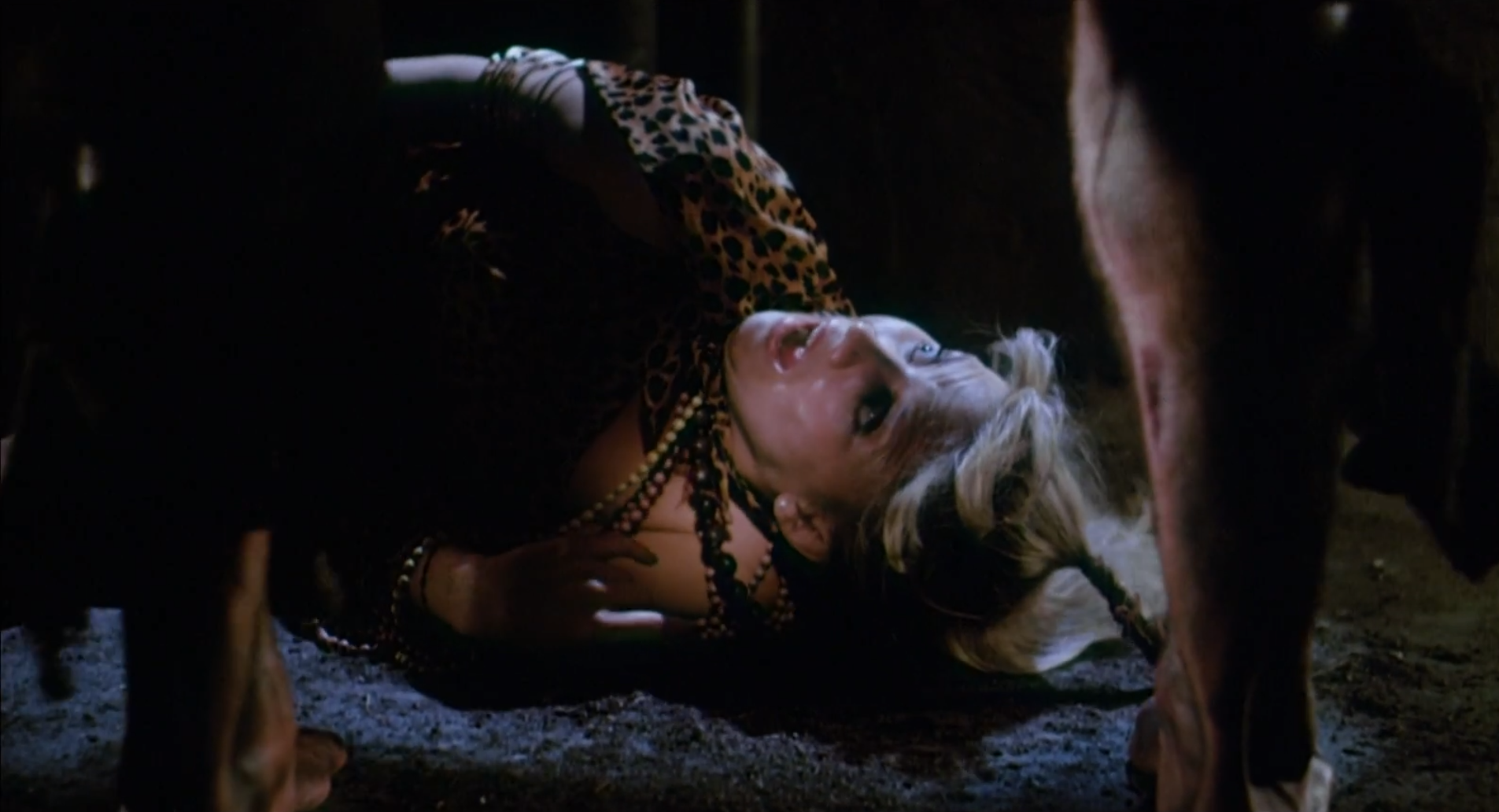 As far as the film’s messaging, this is a film that tries very hard to avoid having any. As Marti and Jeff get better acquainted and they talk about their backgrounds, Jeff reveals that he comes from a rich family and Marti makes fun of him a bit. When Jeff gets offended and asks if she’s one of “those revolutionary types,” Marti says she prefers to remain out of politics altogether and drops the conversation. The inherent political nature of having the neglected offspring of a cruel wealthy man attempt to kill wealthy frat and sorority kids must not have escaped the writer, but instead of delving into these issues further, they seem content to ignore them altogether, dropping it with a simple “I’m not interested.” Although, Garth does kill the shitty, misogynistic frat kids first before homing in on our main cast, so perhaps they didn’t completely escape some accidental political commentary. I should also note that HELL NIGHT’s frat characters are inherently unlikeable, sharing a lot of the same characteristics with the frat guys in the Black Christmas remake: discount Harry Potter and rapey Zorro (my nicknames for Scott and Peter, respectively) leer at every woman they see, describe one woman as not even good enough for childbearing, and say of one of their friends that they should keep her ass and get rid of the rest of her. Marti and Jeff, the two most likeable characters in the cast, frequently disparage Greek life and wonder what’s so damn good about it; and I think the writer of HELL NIGHT, whether he meant to or not, must have had the same question in mind. Maybe this social apparatus which is treated as the pinnacle of class in college life, a useful tool for making connections that “will last all your life,” is not so useful after all.

In short, HELL NIGHT isn’t bad, and it’s definitely worth a watch. But there are definitely better ways to occupy a Friday night. For the first time, I’m giving a half score: 6 and a half out of 10. Watch it SUNDAY night, after you’ve already seen Shudder’s new releases and binged your favorite TV show once or twice: you might find you enjoy it a little more then.