“MAUSOLEUM” Should Have Been Left Locked Away

Every once in a while, I think I’m really going to like a film. Especially films from the 80’s; I generally tend to love movies from that period, sucked in by the practical effects, iconic soundtracks, and innovative creature design. MAUSOLEUM was a film that I was hoping would be akin to Dead and Buried, a unique “cemetery horror” gem that generally gets lost in the wider discussion of 80’s horror. Unfortunately, MAUSOLEUM turned out to be the kind of film that maybe, just maybe, got lost for a reason.

MAUSOLEUM opens on ten-year-old Susan Walker (Julie Christy Murray) after the death of her mother, who is so stricken with grief that she charges into the Nomed family mausoleum. Naturally, she’s almost immediately possessed by the demon who lives inside, an ancient and powerful being that was said to have once inhabited the crown of thorns and is forever bound to the Nomed family (cause reasons). Ten years later, Susan (Bobbie Bresee) is happily married to Oliver (Marjoe Gortner) and only occasionally suffers from nightmares. But when she gets harassed by a guy at a club, that thing that possessed her ten years ago rises up again, and she carves a telekinetic swath through a score of would be abusers and rapists (yet, this film treats her as the villain). And as those around her get increasingly concerned by her behavior, (like owning artwork she obtained herself: the horror) it’s a race against time to recover the artifact that will restore the natural balance and seal the evil inside the MAUSOLEUM once more.

“While the acting and bad CG leave a lot to be desired, MAUSOLEUM really becomes unwatchable when it leans hard into ugly racist caricatures.”

Now why don’t I like this film? There’s plenty about it that should have worked for me: the film is campy as hell with horrible special effects, a plot that includes the literal crown of thorns, and occasionally stunning practical effects. It also has the batshit factor down, as this film has brain explosions, Carrie-like telekinesis, a variety of different body transformations, and literal monster boobs that eat people. The horrible special effects and occasionally terrible acting was charming to me at the outset, and I thought of MAUSOLEUM as the kind of film that’s objectively bad but still enjoyable. It even reads from time to time as the Jennifer’s Body of the 80’s; Susan is objectified and has her boundaries crossed by nearly every man in the film, and she takes her revenge one by one by seducing them and then killing them in increasingly creative ways. But as the film goes on it gets less and less charming, especially when the doctor character (who gives off creepy vibes of his own) comes into the picture; his attempts to restore equilibrium and the film’s subsequent turn to painting Susan’s behavior as childish, a demonic temper tantrum over the death of her mother, undermine the film’s more positive messaging and leave us with nothing but below-par special effects, an overly dramatic climax and a “surprise” ending that will leave you screaming “who cares.”

Now here’s where this film really starts getting ugly: the treatment of its few non-white characters. MAUSOLEUM centers it’s plot mainly around the idea of dynasty, with an upper-middle-class verging on rich white couple having to reckon with the consequences of being part of an ancient and powerful bloodline. When put that way, it isn’t the best look: and then you notice that Susan and Oliver live in a massive, Southern-looking manor with a black housekeeper and a non-black latinx landscaper, and the look gets worse. The landscaper is treated as lazy at best and rapey at worst; Ben leers through windows watching Susan and Oliver make out, invades her personal space, and comes onto her several times in the creepiest way possible. He’s less a character than an ugly racial caricature, exhibiting no characteristics outside of the lazy landscaper stereotype; after Susan kills him and her husband gets a call asking where he is, she says “Oh, you know what he’s like,” which outside of his rapey behavior is the only real characterization Ben gets. And don’t get me started on the film’s black character (notable because she’s the only one) Elsie, who alternates between the helpful housekeeper stereotype and the magical black person stereotype. I’m just going to list some quotes from the film below: you make up your mind as to whether these should be acceptable in 2020.

Oh, and did I mention that there are two separate scenes where Elsie runs away from some dark omen accompanied by bouncy, carnival-esque music? I rest my case. 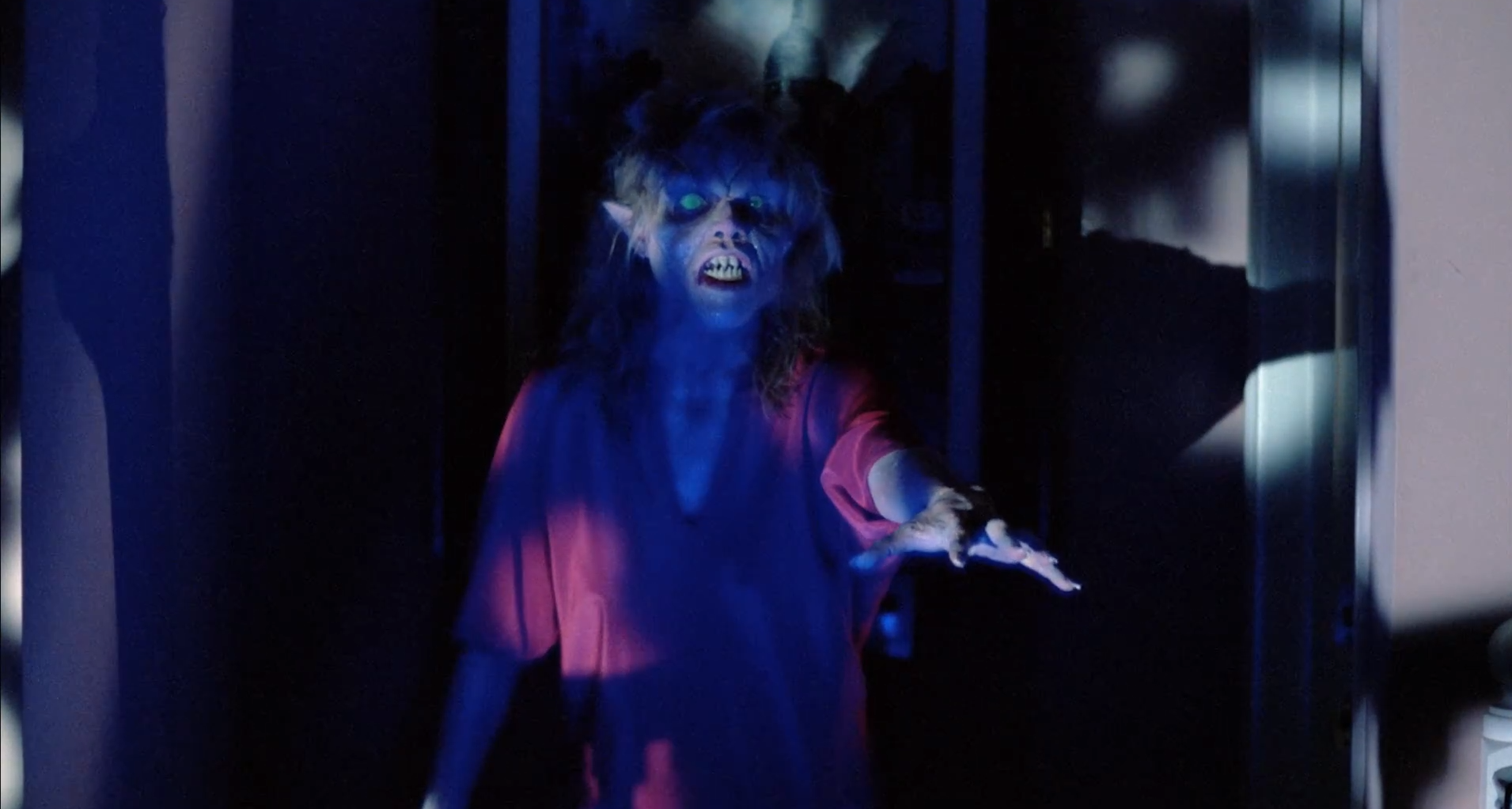 No, the picture isn’t blurry; that’s a deliberate special effect that they use more than once to make the demon look “ethereal.” Sometimes it works. Most of the time not so much.

Look, I know someone is going to say “look man, this is an 80’s film, and you can’t judge art from your modern perspective man. They didn’t believe back then what you believe man.” Listen, my eager little devil’s advocate: you’re right about art being a product of its time, but it being a product of its time does not prevent or preclude its less-than-appealing aspects being discussed and dealt with. Horror has a long history of conservatism and problematic content, and we as horror fans brush up against that every now and then; when that happens, our job isn’t to look away but to deal with it, to discuss why we like the films we like and evaluate whether our favorite films are doing more harm than good. To be frank, none of that is really part of the discussion here for me: this film isn’t exactly a classic, and I see little here that would outweigh its blatant racism and sexism. I can’t recommend it. I’m giving this one a 3 out of 10.

But hey, that’s just my opinion.