Crossbreeds of people and wolves run amok in EIGHT FOR SILVER, and the movie (a world premiere at the current Sundance Film Festival) is a bit of a hybrid itself. Largely an atmospheric period slow-burner, it’s shot through with moments of butchering gore and graphic creature effects. Those who come for the latter might be disappointed to find them spaced out sporadically over the course of the near-two-hour running time, but writer/director Sean Ellis provides sufficient intrigue to hook monster-movie fans of all stripes.

He certainly knows how to raise the curtain, dropping us into a WWI battlefield in the Somme, where gas masks give the soldiers an inhuman cast. As we’re wondering how this ties in to the creature feature to come, Ellis (pictured below) finds a novel way to introduce a classic trope of werewolf lore. The scene shifts briefly to the homefront before then jumping back 35 years and taking us into a French manor house (though all the characters speak English). Charlotte and Edward Laurent (Amelia Crouch and Max Mackintosh) are a couple of adventurous teenagers who spy on their father Seamus (Alistair Petrie) as he plots with other local men to deal with an encampment of Romani travelers on land they claim is theirs. When a gypsy matriarch (Pascale Becouze) is seen making the preparations to curse their oppressors, Ellis makes his second tie back to the landmarks of this genre.​ 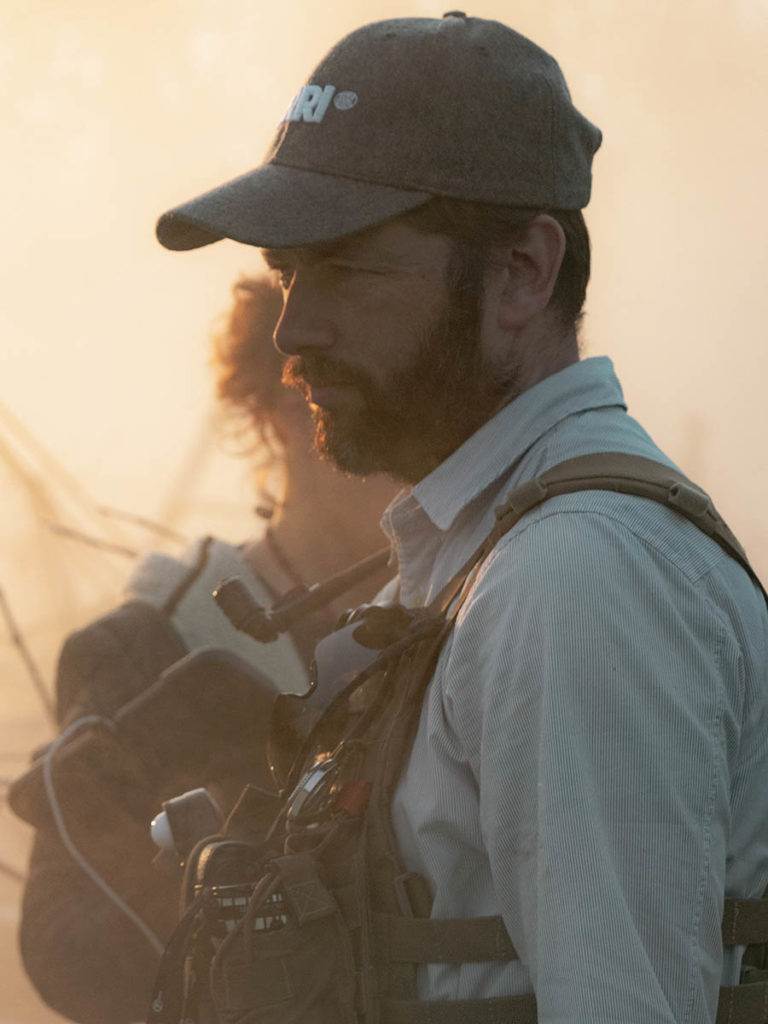 It’s not long before Ellis establishes EIGHT FOR SILVER as very much its own film by staging a key action scene in an impressive long, single shot that’s more impactful than a lot of fast cutting would have been. The aftermath of this event is bad dreams for Charlotte, Edward and their friends, and when they go to seek out the source, the eventual result is Edward disappearing and one of the other boys being horribly murdered by what appears to be a wild animal.

Ellis doesn’t skimp on the savagery when it comes to EIGHT FOR SILVER’s creature victims, though the early human-on-human brutality is even more grotesque, and it casts a long shadow over all of the film’s characters. Arriving in town to investigate the “animal attacks,” and fated to uncover the evil that men do as well, is pathologist John McBride (Boyd Holbrook). “Our bodies speak even after our death. I listen,” he says, before he begins receiving more clues from the same nightmares that afflicted the children. There may be a couple too many dream sequences in EIGHT FOR SILVER, in fact, though Ellis doesn’t try to disguise the fact that they are dreams, and they undeniably deliver the jolts.

Ellis also ladles on the atmosphere in the candlelit interiors and the forbidding woods and landscapes, serving as his own cinematographer and shooting on 35mm film for extra richness. Working largely in tones of gloom and sorrow, he draws us into a world in which cruel actions have monstrous consequences. What happens to the Romani camp can serve as a reflection of the treatment of indigenous peoples, though Ellis never forces the metaphor. (The brief references to the area suffering a cholera pandemic are only accidentally significant, since the film rolled in April 2019.) He’s more concerned with offering his own take on traditional lycanthropic fare, mixing in themes of guilt, religion and the sins of the fathers being passed down to the sons and daughters. He also ties his tale in to true French events by giving John a history with the Beast of Gévaudan, a wolf or similar animal that terrorized a mountain province in the 1760s and served as the basis for Christophe Gans’ more fanciful 2001 feature THE BROTHERHOOD OF THE WOLF.

As graphic as his gore is from the start, Ellis is sparing at first with his glimpses of the creature, and throughout it is an effectively scary mix of physical effects (by veteran French artists Jean-Christophe Spadaccini and Denis Gastou) and CGI. (One of the concept artists was double Oscar-winner Mark Coulier, whose credits include SUSPIRIA and BLACK MIRROR: BANDERSNATCH.) As the rampage draws closer to the Laurent home, considerable drama is wrung from John’s attempts to uncover the truth, Seamus’ refusal to acknowledge it and, in the later going, a character who’s been bitten by the beast desperately trying to hide the fact that they’ve been attacked. Subplots like that never go out of style in this species of film, and Ellis’ combination of such standards with his own take sustains EIGHT FOR SILVER throughout its lengthy duration. The cast is also solid top to bottom, including Kelly Reilly as Isabelle Laurent, whose distanced relationship with Seamus is only made more so as his actions and their consequences come to light.