I’ll start by noting that this review won’t reveal the details of the setpiece in which INFINITY POOL takes its turn into dark science-fiction territory, though many others have (a couple even in their headlines). It’s best to go into the movie, if possible, not knowing any of the bizarre turns it will take–and there are a lot of them, which should be no surprise given that this is the third outing by writer/director Brandon Cronenberg. From ANTIVIRAL through POSSESSOR and his latest feature (a premiere at the current Sundance Film Festival that hits theaters Friday), he’s continuing to push his cinema into increasingly twisted and surreal areas. And it is probably less great/accidental timing than inevitable that he cast our newly minted queen of uncompromising genre fare, Mia Goth, before her breakout showcases X and PEARL had come out.

Goth is in fine and, by film’s end, more-deranged-than-ever form in INFINITY POOL, in which she plays Gabi, a vacationer at a resort in Li Tolqa, a country in an intentionally indeterminate region. Gabi’s the catalyst who upends the life of our protagonist, James Foster (Alexander Skarsgård), who wrote a successful novel over half a decade ago and hasn’t been able to follow it up since. His sympathetic, wealthy wife Em (Cleopatra Coleman) has traveled with him to Li Tolqa so he can recharge his creative batteries in this paradisiacal setting, but right from the start, there are signs that things are going to go sideways. Literally, as Cronenberg and his regular director of photography Karim Hussain tilt and flip the camera while composer Tim Hecker’s eerie electronica quickly sets the unsettling mood. 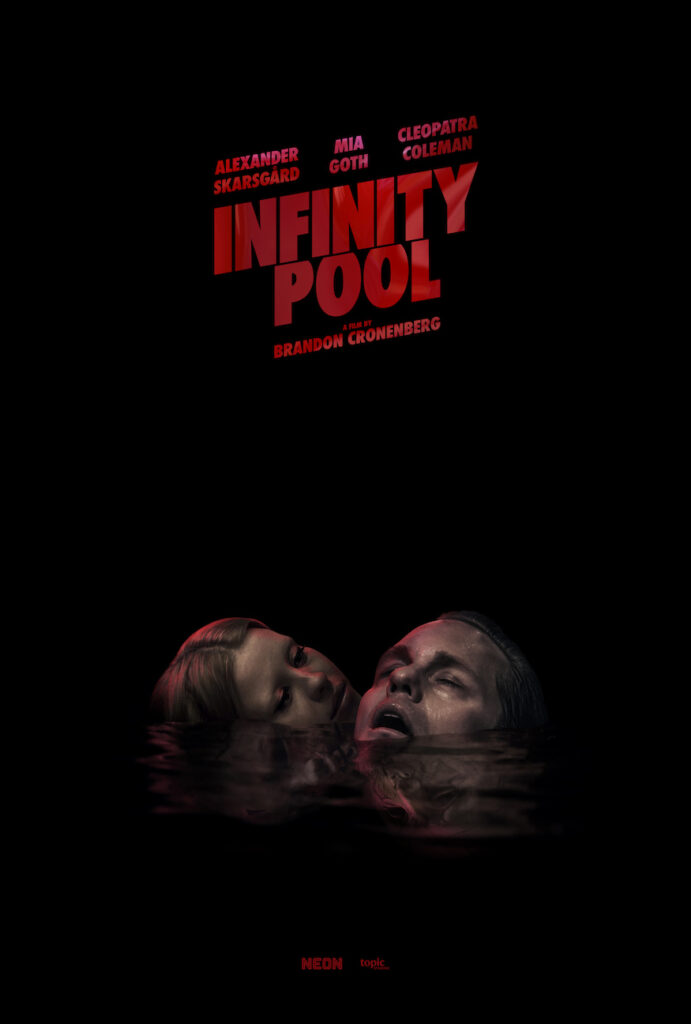 Once James and Em encounter Gabi and her husband Alban (Jalil Lespert), Gabi turns out to be James’ number-one fan, and a much more alluring one than Annie Wilkes. The fact that this predatory vixen is hot for a barely-was author (albeit one who looks like Skarsgård) seems like a satirical jape on Cronenberg’s part, but in any case she lures James and Em out with her and Alban on a driving jaunt beyond the walls of the resort. Here’s where more ominousness occurs; the place is surrounded by fences that seem more appropriate for a military compound, suggesting the quartet are not heading into friendly environs.

Inevitably, the foursome wind up getting into big, bloody trouble, and though they make it back to what should be the safety of their rooms, the trouble follows them there. INFINITY POOL plays and preys upon nascent fears of getting on the wrong side of the law in a faraway land that seems to have no laws, as well as the syndrome of ugly Americans/Europeans believing their superior upbringing can allow them to get away with anything in less “civilized” countries. As it turns out, the Li Tolqa police and prison facilities may look rundown, but their system has developed a rather remarkable technology that sends INFINITY POOL off into a realm of grim fantastica.

Cronenberg builds real, uneasy tension as James and Em are lured into a vacationer’s nightmare, then goes whole hog into a phantasmagorical concept that also probes some deep psychological veins. It also, once James’ situation has been resolved, seems to be rather obviously leading to a particular question of identity that will be the crux of the drama to follow, but to his great credit, Cronenberg dispenses with that notion in one scene and moves on.

What he moves on to is James discovering a darker side of himself that he never could have imagined, encouraged by Em and a group of fellow travelers down this specific rabbit hole that leads to more bloodshed and debauchery. Even given the graphic excesses of his prior work, this is Cronenberg’s most explicit, extreme vision yet, ranging from pornographic close-ups (allow me to join the chorus of those wondering how this got away with an R rating) to brutal bloodshed to hallucinatory montages that draw James and us ever further from recognizable reality. INFINITY POOL leaps away from logic into areas of pure sensation and psychopathology, and while it doesn’t always make sense and sometimes loses that relatable edge, it never stops being fascinating to those willing to get on its wavelength.

The fiercely committed performances by Skarsgård and Goth, playing out a pas de deux of seduction, obsession, surrender and humiliation, are the key to the spell INFINITY POOL casts. Even amidst the bold strokes of the filmmaking, they hold the attention as you wait to see what strange indulgence they’ll get up to next. The craft is impeccable, from Hussain’s cinematography, which mixes the cold, clinical surfaces of ANTIVIRAL with the visceral grit of POSSESSOR, and Hecker’s pulsing, penetrating score to James Vandewater’s nervy editing and the production design by Zosia Mackenzie (COME TO DADDY, SLASH/BACK), which alternates the comforting and the creepy until it’s hard to tell them apart. INFINITY POOL reinforces Cronenberg as one of the genre’s most distinctive talents, one we’ll willingly follow into the darkest and most depraved recesses of his imagination.