During my (so far) 11 weeks of isolation, I’ve stumbled upon three pieces of media that I had no idea would agitate my anxiety in the age of COVID-19.

The first was Stephen King’s THE STAND, which I had somehow managed to avoid any spoilers or plot summaries of in my 33 years on Earth, and dear God that didn’t go well. Then, while trying to catch up with all the television I’ve missed recently, I popped on THE STRAIN, and you can probably guess how a story about vampirism spreading through the world like a virus went over.

Finally, there was the 1978 remake of INVASION OF THE BODY SNATCHERS, which I picked up from Shout! Factory after finding out they were discontinuing the title this year. And you know what? Despite featuring one of the bleakest endings in horror cinema and enough anxiety-inducing moments to cause any of us to curl up into the fetal position on our respective living room floors, I still cannot recommend this movie enough.​ 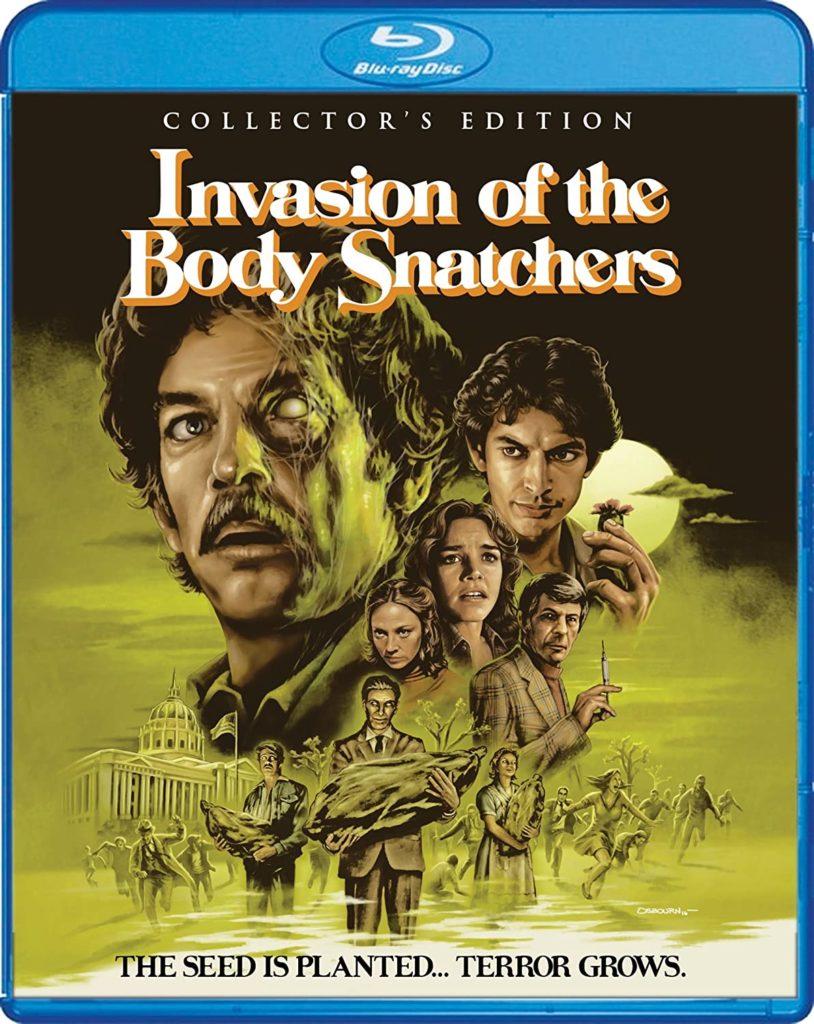 It’s strange days for Elizabeth (Brooke Adams), an employee with the San Francisco Public Health Department. Her husband Geoffrey (Art Hindle) has been acting strange, his personality seeming to have changed completely overnight. The city she’s spent her whole life in now feels foreign to her, and the people she meets on its streets appear to be watching with cold, detached stares. She brings her fears to her friend and colleague Matthew (Donald Sutherland), who at first dismisses them as paranoia, but soon arrives at the same conclusion she has: Their city is changing into something new. Something alien. Soon they will uncover a terrifying conspiracy whose origins lie beyond the stars, and that threatens the future of humanity.

The brilliance of this first (and best) attempt at remaking the original 1956 INVASION OF THE BODY SNATCHERS is the subtlety with which it gets under your skin. Director Philip Kaufman uses the elements surrounding the characters (the lighting of a room, sounds off in the distance, things happening in the backgrounds of scenes) to create a heightened sense of anxiety and doom within the audience. The alien spores that land on earth in the film’s opening moments work quickly and efficiently, and perhaps the scariest part of BODY SNATCHERS is the fact that we can see them executing their plot long before our heroes even know what’s going on. A feeling of dreadful inevitability sinks in when we realize just how much has been happening beyond the frame of what we see.

Anchoring the film are the performances, which sit firmly in the realm of realism and never veer off into camp territory. Sutherland and Adams’ chemistry is fantastic, and theirs is easily the most compelling and relatable relationship in the film. A young Jeff Goldblum comes very close to stealing every scene he’s in as neurotic poet Jack. And it’s a pleasure to watch Leonard Nimoy play against type as the pompous Dr. Kibner, a wonderful commentary on every self-help guru who has peddled mental snake oil since the dawn of time.

The original INVASION OF THE BODY SNATCHERS was a commentary on the intimidation tactics and push toward conformity that characterized the McCarthy era. In his version, Kaufman updates those themes for his time, injecting into the film the Watergate-influenced mistrust of the 1970s. Looking at this story today, the parallels that can be drawn to our new coronavirus-infused reality are plain and startling. Especially in the initial days of the pandemic, we found ourselves fearing the invisible threat that could be carried by anyone, be they stranger, neighbor, friend or family. Suddenly, all that had been familiar was now alien. For many people, they still are. I suspect that, when things in our world regain some sense of normalcy and movies begin to be made again, it won’t be long before another take on this classic story, filtered through the lens of our new normal, is told. The ground is still fertile.