The best of Fantasia 2021 honored with jury and audience awards

The 2021 Fantasia International Film Festival, which concluded last night, screened genre features from 24 countries, with 25 world premieres, 12 international premieres and 34 North American premieres, as well as numerous shorts. This morning, the full lineup of jury and audience awards has been announced:

BEST FILM: VOICE OF SILENCE (pictured above; South Korea, d. Hong Eui-jeong)
“We gave the award for best film to VOICE OF SILENCE, for the quality of its craft as well as its unparalleled ability to surprise. In a film festival that’s known as a melting pot of genres, VOICE OF SILENCE feels like an excellent representative for the top prize in the Cheval Noir section. It’s earnest and sincere in tone but also unpredictable and experimental, impossible to pin down, and truly idiosyncratic. Put simply, it’s unlike anything we’d seen before.”

BEST DIRECTOR: Igor Legarreta (ALL THE MOONS, Spain/France)
“The jury wants to highlight the beautiful work of this director, who has managed to capture poetic horror with pictorial precision.”

BEST SCREENPLAY: Mark O’Brien (THE RIGHTEOUS, Canada)
“For its compelling and intense script which investigates grief, compassion, faith, love, self-doubt and madness, all the things, therefore, that make us the creatures that we are, that make us human.”

BEST SCORE: John Adams (HELLBENDER, USA)
“The jury is thrilled to present the award for best score to a very talented family, in front of and behind the camera. The award for this nightmarishly cool music goes to John Adams for HELLBENDER.”

BEST ACTOR: Yoo Ah-in (VOICE OF SILENCE, South Korea)
“With a lot of extremely strong competition, Yoo Ah-in’s non-verbal performance blew us away. Communicating a vast wealth of emotion with physicality alone, he provides a clarity that anchored us among the film’s many swerves and obfuscations.”

BEST ACTRESS: Zelda Adams (HELLBENDER, USA)
“The power in her performance and her overwhelming presence confirm the award for this young actress.”

JURY SPECIAL MENTION–CINEMATOGRAPHY: Imanol Nabea (ALL THE MOONS, Spain/France)
“The jury decided that we absolutely must give a Special Mention to Imanol Nabea for their cinematography on ALL THE MOONS. Its expert visual narration, through beautiful light and evocative camera movement, just blew us all away. It was a highlight of an already exquisite work.”

JURY SPECIAL MENTION–RISING STAR: Sienna Sayer (MARTYRS LANE, UK)
“Her captivating performance both broke and chilled our hearts. The jury unanimously wishes to acknowledge this talent to watch with a Rising Star award for Sienna Sayer from MARTYRS LANE.”

JURY SPECIAL MENTION–SOUND DESIGN: Stef Lernous (HOTEL POSEIDON, Belgium)
“We felt that the sound design of HOTEL POSEIDON deserved a particular shout-out, paramount in the film’s visceral experience. The blurring of the line between score and sound effect proved particularly haunting for the jury!”

NEW FLESH AWARD FOR DEBUT FILM
The New Flesh jury, which awards debut feature films and their creators, was presided over by UK author, critic and broadcaster Kim Newman and comprised of Jill Gevargizian (THE STYLIST), Gigi Saul Guerrero (Blumhouse and Hulu’s INTO THE DARK entry CULTURE SHOCK, upcoming BINGO HELL), Brian O’Malley (LET US PREY, THE LODGERS) and Myriam Sassine (Co-Founder of the Maskoon Fantastic Film Festival and producer of AMAL, A SON, ALL THIS VICTORY). 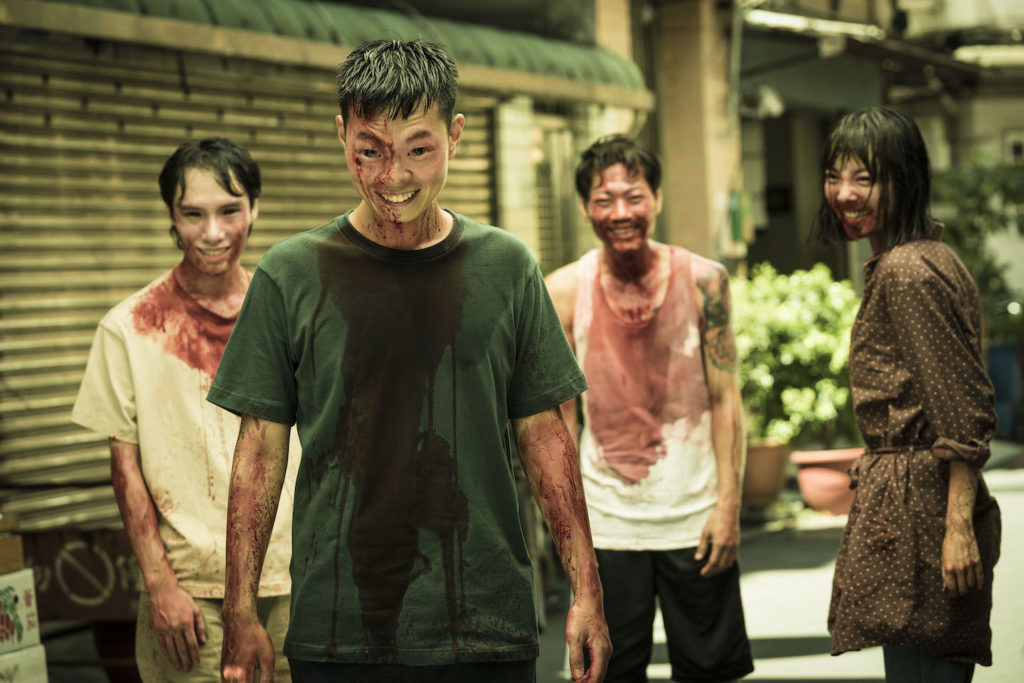 BEST FILM: THE SADNESS (Taiwan, d. Rob Jabbaz)
“We are pleased to present THE SADNESS with the New Flesh jury award! Though the jury had their jaws dropped to the floor, they were incredibly impressed with such a slickly produced rampage of gore. A wild ride that doesn’t stop! Sadists, cannibalism, lust…one could say it has been a while since a film has managed to horrify and scare them in the level this film did. THE SADNESS was not afraid to take risks and go beyond any infection film we have seen to date, touching on political themes that our world isn’t too far off of, but still maintaining thrilling entertainment for the viewer. Congratulations to the entire team of THE SADNESS!”

SPECIAL JURY MENTION: BEYOND THE INFINITE TWO MINUTES (Japan, d. Junta Yamaguchi)
”BEYOND THE INFINITE TWO MINUTES receives a special jury award for its outstanding achievement in filmmaking. Remarkable in both its mind-bending concept and its expert execution, the whole jury marveled at the sheer cinematic brilliance of this magnificent contribution to the time travel genre.”

SPECIAL JURY MENTION: OFFICE ROYALE (Japan, d. Kazuaki Seki)
“A feast for the eyes, OFFICE ROYALE is a bonkers and hilarious debut film which we are awarding with a special jury mention. Its intensely feminine aesthetic mixed with extreme violence and gore is as thrilling as it is refreshing.”

BEST FILM: VULNERABILITY (Japan, d. Eiji Tanigawa)
“The direction, visuals, editing, narration and performances from the two main actors combine to create a deeply powerful cinematic experience. It’s a playful, clever portrait of humanity’s beauty, flaws, and fascinating destructive impulses. We were particularly taken back by the chaotic side of the film.”

BEST SCREENPLAY: Steph Kwiatkowski (RACHELS DON’T RUN, USA/France)
”A beautifully paced script that taps into our need for connection whilst gracefully allowing us into the character, painting her needs, desires and vulnerabilities through the action, story and behavior of others. This is a really smart and neat concept, skillfully executed, which builds us up only to crush us emotionally.”

BEST ACTRESS: Victoria Villier (INHERITANCE, USA)
“From the moment she first appears on screen, Victoria Villier makes you feel like you’ve known her for years. Her performance is pitch-perfect, entirely grounded in truth and absolutely captivating to watch from beginning to end. With just one look, she can make you feel for her, fear for her, and make you want to see everything else she’ll ever be in.”

BEST ACTOR: Ian Cramer (OTHER BODIES, USA)
“Ian Cramer manages to suck you into his tale and slowly tighten his grip on you throughout the entire movie. Much like he does to the protagonist, he leaves you feeling seduced, haunted, depraved and, quite literally, breathless.”

BEST FEATURE: CRYPTOZOO (USA, d. Dash Shaw)
“This film is a psychedelic paean, it is a modern and fascinating mythological painting, and it is also a strong political metaphor.”

BEST SHORT FILM–GOLD: SEEN IT (India, d. Adithi Krishnadas)
”This film instantly stuck to me in terms of its graphic style. Lovely visuals and brilliant portrayal of haunting experiences with the use of humor.”

BEST SHORT FILM–SILVER: GHOST DOGS (USA, d. Joe Cappa)
“This film is about a dog’s feelings during midnight. The author’s sense of humor and the creepiness of the environment elicit a strange and fantastic emotion in the viewer.”

BEST SHORT FILM–BRONZE: MONDO DOMINO (France, d. Suki)
“Because of the important message of the film, its outstanding animation, and music.”